If the writer must sometimes wrestle for words, consider the translator’s lot: choosing not just the literal equivalent in another tongue, but the closest embodiment of the spirit, tone, sensibility and rhythm of the original.

Judith Filc, a translator who lives in Beacon, grapples with this all the time, especially with poetry. 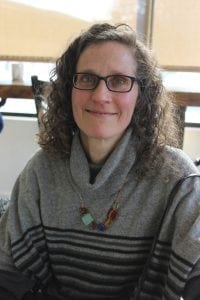 Judith Filc (Photo by A. Rooney)

Filc, a native of Argentina, came to the U.S. at age 25 to pursue a doctorate. She lived in the States for seven years, returned to Argentina for seven years, the came back to the U.S. in 2002 to teach at New York University. She and her husband moved to Beacon 10 years ago. Her most recent translation was a collection of poetry by Argentine poet Mercedes Roffé called Ghost Opera. (A reading scheduled for April 12 at the Howland Public Library has been postponed.)

Much of her translation work is intuitive, Filc says, because simply finding the right word or phrase does not always equate to “sameness.” Poetry can be tough because it involves so much interpretation and “there is no such thing as ‘understanding’ poetry.”

Idioms also present a challenge. “If there’s a play on words which doesn’t exist in English, I look for an English idiom that works in a similar way,” says Filc, who also speaks French. With poetry, “you won’t be able to recreate the same rhythm, but you can aim for an equivalent. What you produce is not what was there, yet what is lost in translation can also be a gain.”

If the author is living, much consultation is involved, and many revisions. “Instead of presuming what they want to say, I’ll ask them,” she says. “And the answer is often ‘I don’t know.’ It’s the nature of poetic language; it can resonate in a lot of ways — that’s the beauty of it.”

The Art of Translation

We asked Judith Filc if she could demonstrate her process. As an example, she chose a fragment of a poem by Argentine poet Catalina Boccardo.

1. “Talar could be ‘to cut down’ or ‘to fell.’ I choose the latter because I want to preserve the rhythm and form of the original — short lines, staccato.”

2. “I don’t know if the person performing the actions is a man or a woman, because in Spanish you don’t need to use a personal pronoun, and possessive adjectives have no gender. I chose male, but I’ll ask the author.”

3. “Arrojar can mean ‘to cast,’ ‘to hurl’ or ‘to throw.’ The next line is ‘like a glass of water.’ I picture the person throwing it with force, so I go with hurl. My choice also has to do with the rest of the poem, where there’s a lot of violence. In my mental image the glass shatters. I need to ask the author what she saw when writing the line.”

4. “Pasto seco is ‘dried grass,’ but I believe the poet is referring to grass after a drought. My husband suggested ‘wilted.’ ”

Filc says she will continue to revise a translation “until it sounds right to me. Sometimes that involves moving away from the original, which I do if it makes sense, as long as I don’t feel I’m changing its spirit. You need a long stage when you forget the original and live with the translation, seeing them independent of each other.”