Using a $9,900 federal grant, the Beacon Police Department is outfitting its 20 patrol officers with high-definition body cameras, an upgrade the department says will increase transparency and secure prosecutions.

After a yearlong pilot program during which the department trained officers and worked through technical issues, the cameras were deployed in the last two weeks, said Lt. Tom Figlia, who oversees the system. 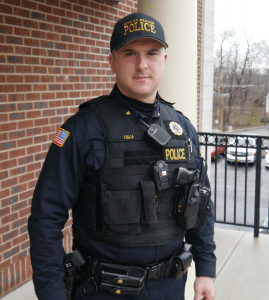 Lt. Tom Figlia is shown with a body camera attached at the center of his vest. (Photo by J. Simms)

The camera clips to the officer’s vest and records video and audio of whatever occurs in front of him or her. The officer pushes a button to start the device, which saves footage from 10 seconds before activation.

The technology has already paid off, according to Police Chief Kevin Junjulas, who said on April 4 that an officer’s camera captured footage of a suspect discarding evidence while being pursued on foot.

The cameras are being implemented primarily to aid in prosecutions, Junjulas said. A camera is also a “good tool for internal investigations, to determine what actually happened,” he said. “The video is right there.” 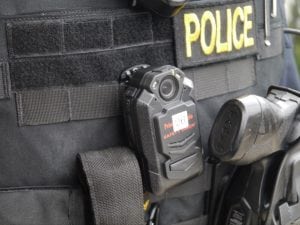 The assumption when an officer is on duty is “that you’re being recorded in one way or another,” whether by a bystander’s cellphone or a security camera, Junjulas said. The body cameras “allow us to record incidents on our terms.”

Figlia said that the cameras are not being implemented in reaction to any particular incident, nor are they a response to the cases of alleged police brutality that have been reported across the country in recent years.

“We’re not having that problem,” he said. “What we’re having are incidents where the camera captures a crime in progress.”

Junjulas said the cameras are also unrelated to an investigation by the U.S. Department of Justice of the Beacon department’s standards and practices. Federal oversight of the department ended in 2016. 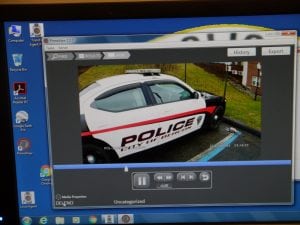 Supervisors at headquarters can view what the officer sees. (Photo by J. Simms)

As more departments equip their officers with cameras, civil-liberty watchdogs  caution that strict policies should be in place to govern their use.

Beacon police officials declined to release the department’s body camera policy, which one study found is not unusual. Upturn, a Washington, D.C.-based think tank, studies technology and social justice as it affects communities of color. Only a third of the 69 large departments it surveyed had posted their body-camera rules where they could be easily found online.

Figlia said that the city’s legal department must review requests before the police can release policy information to the public. The Current has filed a Freedom of Information Law request for the policy to see how it compares with “best practices” suggested by groups such as the American Civil Liberties Union.

Figlia said the Beacon department’s policy does address when an officer should activate his or her camera. “In the heat of the moment, there are going to be occasions where, even with good intent, an officer fails to push the button,” he said. But as soon as the officer gets their focus back, he or she is expected to activate the camera, he said, and “if there’s misconduct, that will be dealt with.”

At bwcscorecard.org, the think tanks Upturn and the Leadership Conference on Civil and Human Rights provide what they consider to be best practices for police use of body cameras. Policies, they say, should:

Other issues that have come up include whether an officer can record inside your home if you have not consented to a search.

Another issue that should be addressed in a policy is who can view the footage, and when, said Harlan Yu, the executive director of Upturn. In some jurisdictions, police have access to footage that other witnesses may not, he noted. In that case, an officer could use a recording to “square” his or her account of an incident with “what’s shown in the footage in an artificial way.”

Upturn, which last year produced a “policy scorecard” of large police departments that use body cameras, recommends that officers give an independent account of an incident before viewing footage. 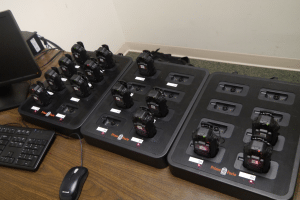 Body cameras being charged at the Beacon Police Department (Photo by J. Simms)

In 2014, the Police Executive Research Forum recommended the opposite — that officers should be permitted to review video footage in which they were involved before making a statement about the incident. “Reviewing footage,” it said, “will help officers remember the incident more clearly, which leads to more accurate documentation of events. The goal is to find the truth, which is facilitated by letting officers have all possible evidence.”

The ACLU recommends police save for three years all footage that shows the use of force, commission of a felony, events leading up to an arrest for a felony or an encounter that resulted in a civilian complaint. Otherwise, video should be retained for six months and then automatically deleted, it said.