Stephanie Dignan of Beacon is the creator of FrankenStuffs, which are made with parts salvaged from previously loved stuffed animals. See frankenstuffs.etsy.com. 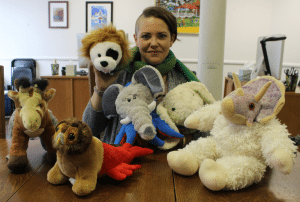 Stephanie Dignan and her FrankenStuff entourage (Photo by A. Rooney)

How did you get this idea?

I had just lost a job and needed to create income with zero overhead. There was a thrift store nearby and I got an idea. I bought a bunch of stuffed animals and sat in the middle of a room and started chopping heads off and mixing and matching. I call it vegan taxidermy.

Did you study to be a veterinarian, by chance?

I grew up on a farm, but I was an English major. FrankenStuffs are a great opportunity to come up with ways to not write. Actually, I would like to write children’s books. There are few things left in the world especially for children. That’s why the idea of giving a child a stuffed animal that he or she may have for the rest of their life, and never see another like it, is so appealing.

Where besides thrift stores do you find your raw materials?

People find me and donate them. Virtually no charities accept stuffed animals anymore, so this is giving forgotten friends another chance, along with a new identity and personality, while cutting down on wastefulness. I’ve made about 800 in three years but mass production is not the point. This is not my million-dollar idea.

How do children react?

Because their minds are more elastic, they don’t pause for a second. And they come up with incredible ideas. Teachers have used them when working with autistic children and in exercises about acceptance. With adults, it’s a beautiful thing to watch their hard shell come off as they play with the animal.

Do you think most adults say it’s for a child but buy for themselves?
Definitely. And often they adopt more than one. Someone I met at an arts fair bought a suitcase so she could carry home four.