After the artists in Beacon have closed their doors on the second and final day of Open Studios on Sunday, April 29, the party will be extended at least two hours with a Funky, Spunky Literature Night at Quinn’s.

“There’s been no writing event at Beacon Open Studios before,” notes Donna Minkowitz, a newcomer to Beacon who is organizing the event, which begins at 6:30 p.m. “The more literary events we have, the better. We would love for everyone to participate, not just ‘writers.’ We want literature showcased as something heartfelt.” 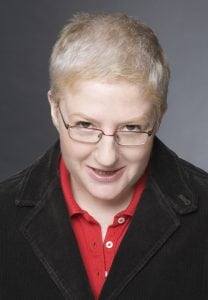 The evening will begin with readings from novelist Julie Chibbaro, poet Ruth Danon and the theatrical duo of Jason Craig and Jessica Jellife of Banana Bag & Bodice. Minkowitz promises that each will offer their “most vulnerable, tender, ferocious, fiercest work” and “sexy, edgy and heartfelt literary writing.”

Also on the agenda, she says, will be a collaborative Memoir Write-a-Thon with audience members, with prizes awarded for the best sentences and scene. Minkowitz has written two memoirs and is passionate about the form.

“I’ve met a lot of people who want to write about their lives, but think, why would anyone care?,” she says. “But it’s not self-important. Telling the truth about your life is difficult and embarrassing, but it can bring people together.”

Her most recent memoir, Growing Up Golem: How I Survived My Mother, Brooklyn and Some Really Bad Dates, is written as if Minkowitz’s mother had created her as a golem (in Jewish lore, an inanimate figure created magically, often to serve its creator). It details her reclamation of herself as an adult, with liberal doses of humor.

Minkowitz began her writing career in 1987 at The Village Voice, where for eight years she wrote about lesbian and gay topics, political movements, sex, violence and relationships.

We asked Donna Minkowitz to share three of her favorite memoirs.

The Periodic Table, by Primo Levi
Levi was an Italian writer and chemist who survived Auschwitz as a young man.

Soul Serenade, by Rashod Ollison
A gay black man, Ollison writes beautifully about his childhood in Arkansas and the violence he endured through the consolations of soul music.

The Architect of Desire, by Suzannah Lessard
Lessard recounts the “beauty and danger” that persist in the family of her grandfather, the architect Stanford White.

“It was known as a writer’s paper, and there was great freedom given, in terms of style and expression,” she recalls. “Even if writing about politics, there was no contradiction in also making it beautiful.”

During that time, Minkowitz wrote her first memoir, Ferocious Romance: What My Encounters with the Right Taught Me About Sex, God and Fury, which detailed the time she spent embedded, disguised as a male teenager, in organizations such as Promise Keepers and an anti-gay evangelical group. She has since written for many publications, including Slate, Salon, The Nation and The Advocate, and teaches writing from her home.

A severe case of repetitive stress syndrome forced her to dictate rather than type, which curtailed her journalism for a while. But it also tunneled her focus to other forms. She is working on a novel about marriage and also writes about food and restaurants for Gay City News.

Minkowitz and her wife moved to Beacon in January and she’s already conducted a memoir-writing workshop at the Howland library. Having lived nearly her entire life in New York City, Minkowitz isn’t a driver and so was happy to find Beacon a walkable place.

“It was at the top of the list of places we wanted to move to,” she says. “I had come for the weekend a few times and had a real sense of it as an arts community. The people are so nice, and I’m pleased at how many are so into writing.”