Flora Stadler, James Case-Leal and Elissa Betterbid were elected on Tuesday, May 15, to the Beacon school board, succeeding three incumbents who chose not to run to retain their seats.

A violent thunderstorm that hit about 4 p.m. likely affected turnout, which was only 7.5 percent of registered voters. The weather forced the postponement of a student concert at Beacon High School that usually bring parents to the school to vote. 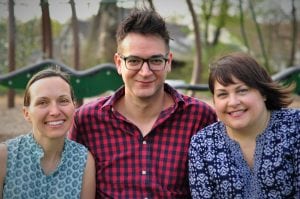 Stadler (601), Case-Leal (555) and Betterbid (552) received the most votes among the six candidates. The other candidates were Christine Galbo (517), Ali Muhammad (446) and Joshua Galarza (271). The only candidate with previous board experience was Galbo, who served two terms but did not seek re-election in 2016.

Betterbid works in media and advertising and has three children attending school in the district — a freshman at Beacon High School, a sixth-grader at Rombout Middle School and a fifth-grader at Glenham Elementary. She is the former president of the Packanack Lake Mothers Club, a women’s organization in Wayne, New Jersey, with more than 1,000 members.

Case-Leal, a college educator and visual artist, is the father of twin fourth-graders at J.V. Forrestal Elementary. He led the team of students that made last year’s Spirit of Beacon Day float at Forrestal and coordinated with the district and the city’s parks and police departments to organize the April 20 protest at Memorial Park against gun violence in schools.

Stadler is a PTA board member at South Avenue Elementary and the mother of two boys who are students there. She volunteers for the Wee Play Community Project and Advocates for Beacon Schools and works part-time for two Beacon-based companies.

When the new board is seated on July 1, the only member who will not be in his or her first elected term is its president, Anthony White, who was elected in 2014 and re-elected in 2017. School board members serve three-year terms.

The new board will be seated July 1.

The board has suffered its share of upheaval over the past few years, with the two members and the superintendent resigning in 2016 and an incumbent soundly defeated that same year. The district has had nine superintendents since 2006.

Because the storm knocked out power late Tuesday, the Beacon school board delayed counting the votes until Wednesday. The board said it will draft two resolutions asking the legislature to amend state laws to allow districts to extend voting hours in circumstances such as a severe storm.