A quick and brutish thunderstorm that blew through the Highlands late Tuesday afternoon caused extensive damage and power outages and led to the death of an 11-year-old Newburgh girl.

The girl was helping her mother unload an SUV outside a home on Robinson Avenue at about 4 p.m. when a falling tree crushed the vehicle. Newburgh firefighters extracted the girl but she was pronounced dead at St. Luke’s Hospital, police said.

Police did not release the girls’ name, but a fundraiser established online for funeral expenses identified her as Gina Garzón and said she had just taken her first Communion the previous Saturday. Her mother suffered minor injuries, police said.

Other storm fatalities were Lauren Svendsen, 41, a fine-arts teacher at North Salem Middle/High School, whose car was struck by a tree in New Fairfield, Connecticut, near her home; Lisa Resnick, 58, of Rosendale, who died in her parked car at about 5 p.m. on the grounds of Mount Saint Mary College Desmond Campus in the Town of Newburgh, where she was attending a function; and an 80-year-old woman who died in Ramapo in Rockland County when her car was hit by a falling tree.

There had not been a tornado recorded in Putnam County since 1990, and the last one to cause injuries was an EF-2 in 1989 that hit Carmel and Brewster.

A macroburst was also confirmed along the I-84 corridor in Wappingers Falls on Tuesday, cutting a path about 3 miles wide and 8 miles long with wind speeds exceeding 100 mph. (In a tornado, trees fall in many different directions, while in a macroburst they show a pattern.) 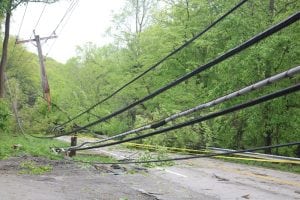 Route 403 in Garrison was closed on Wednesday due to fallen trees that toppled power lines. (Photo by Michael Turton)

Falling trees caused widespread power outages and forced Metro-North to suspend service on the Hudson Line during the Tuesday rush hour. It stopped service between Croton-Harmon and Poughkeepsie until about 12:15 a.m. to clear trees.

Central Hudson said that 74,000 customers were affected by the storm. As of 5 p.m. Friday, it said about 4,500 customers remained without electric service, including 2,300 in Dutchess County and 320 in Putnam. The utility said the “vast majority” of its customers would have power by the end of the day. At least 220 broken poles and 77 downed wires still needed repair, the utility said.

Nineteen distribution circuits and two transmission lines were damaged and its crews, which include 185 line workers and 180 personnel to clear trees, still needed to visit at least 425 locations for repairs. Another 270 mutual-aid line workers arrived on Wednesday from locations such as Niagara Falls, Vermont and Michigan.

“Crews are working methodically, beginning at substations and working outward along distribution circuits to repair damage and restore electric service,” said Charles Freni, a Central Hudson spokesman. “While electric service for most of our customers will be restored by Friday night, there are pockets of significant damage that will take longer to repair.”

On Thursday morning, he added: “The amount of tree damage remains a concern, as substantial work remains to restore electric service to all our customers impacted by the storm. Repairs will begin to restore service to fewer and fewer customers, as we work in neighborhoods and along individual streets.”

The utility said its focus on Wednesday was clearing trees from roadways. As of noon that day, there were 144 roads closed in Putnam County, including Route 403 in Garrison. The county worked through a priority list, which included getting power restored at Putnam Hospital Center.

Dutchess County Executive Marc Molinaro declared a state of emergency and restricted travel in the southern part of the county, including Beacon, at 6 p.m. on Tuesday, and Putnam County Executive MaryEllen Odell did the same for Putnam. Gov. Andrew Cuomo visited Putnam Valley on Wednesday to survey the damage and deployed 125 members of the New York National Guard. 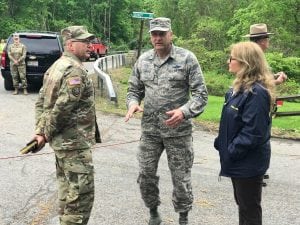 “We’ll be bringing in an additional 1,100 [people] to help clean up the mess,” Cuomo said. He said the state could provide hundreds of generators and 60,000 prepared meals. “There has been an issue in terms of utility response and when you’re without power, any delay is too long and we understand that,” he said.

Mayor Bill O’Neill of Nelsonville said Wednesday morning that Central Hudson had been “as responsive as all get-out,” and that he had spoken to Cold Spring Mayor Dave Merandy, who reported that village crews were doing clean-up.

O’Neill added that Odell and Ken Clair, the acting county emergency services commissioner, called him Tuesday after the storm to check on the situation in the village and described county officials as also being “completely responsive.”

Schools in the Highlands were closed on Wednesday but re-opened Thursday.