Spend a little time searching for “straw bale gardening” online and you’ll be convinced. It’s a low-cost alternative to creating raised beds, buying containers or designing a landscape. As a bonus, after the growing season, the straw can be composted.

The Wee Woods nature playground designed by One Nature at Memorial Park in Beacon uses straw bales in its design, with live cuttings of Salix discolor, or pussy willow.

“The idea is to form an allée, a tunnel of willows, for children to travel through on their way to the woodland,” explains Bryan Quinn, founder of One Nature. As the trees grow, the straw will disintegrate and fall away, leaving the trees as the outline. 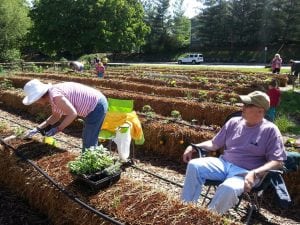 Straw bales were useful because the site’s soil was dry and compacted and needed work to prepare, he says. “It would have been a huge amount of labor to drill holes and drive stakes into the ground.”

Straw bales have excellent water absorbency and retention, making them a smart option for spaces where watering is a challenge, like a park.  Since you’re not planting in ground that has a seedbed, weeds will be suppressed under the bale, allowing the plant to grow without competition.

Joel Karsten, a horticulturist in Roseville, Minnesota, and  the author of Straw Bale Gardening, found that the key to success is creating the right level of decomposition in the straw. His method involves conditioning the bale for two weeks prior to planting.

“Adding a source of nitrogen, either organically or with something like blood meal or a lawn fertilizer stimulates bacteria growth,” he says. The rapid colonization of bacteria generates heat. After 10 to 12 days, it cools enough to be planted in. Karsten noted that this warmer medium can be planted in earlier than soil, which extends the growing season. 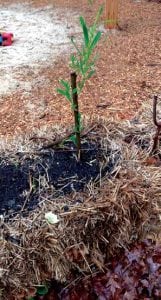 A willow growing from a cutting inside a straw bale at the Wee Woods nature playground in Beacon. As a growing medium, straw bales are low-maintenance and can have many uses. (Photo by P. Doan)

Quinn says the straw bale medium worked well for pussy willows, which are used to the shifting soils of riverbanks, but that trees like oaks or maple wouldn’t appreciate the same treatment.

Karsten has found that plants that thrive in pH-balanced conditions will succeed. Plants such as blueberries that like more acidic soil, or rosemary, which likes more alkaline conditions, don’t grow well. And perennial vegetables like asparagus aren’t good candidates since the bale decomposes.

However, he says, “there are very few things that won’t grow well. Even things that I would never try in soil here in Minnesota, like sweet potatoes, produce marvelously.”

With Karsten’s method, nitrogen is the key to get the bacteria moving. His book has a chart that gardeners can use to calculate the exact amount for their bale.

“The goal is to bring the carbon-nitrogen ratio of the straw down to 20:1,” he says. For example, the ratio in wheat straw is 80:1. Applications of nitrogen shift the balance; the bale breaks down into nitrogen ions a seedling can absorb.

“The existence of worms, insects, fungi, mold and bacteria in the bales is a miraculous thing to see,” he says. “However, the most important part of the process is the bacteria, which can only be seen with a microscope.”

While I looked into bales out of curiosity, Karsten says they have the potential to change lives in impoverished nations. “With five bales of waste rice straw, a sheet of paper and a starter pack of seeds, within 60 days they are already harvesting crops and feeding themselves,” he says.