The Bulldogs, who finished the regular season 12-8 and were seeded eighth in the Section 1, Class B tournament, were upended in the first round at Dutchess Stadium by No. 9 Tappan Zee, 5-3. 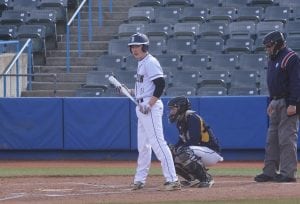 Andrew Schneider looks for the sign from third during Beacon’s victory over Pelham on April 5.
(Photo by S. Pearlman)

Seeded No. 16 in Section 1, Class C, the softball team won a qualifying game against Lincoln, 16-13, on May 18. Savannah Mora had five hits, five stolen bases and 2 RBIs. The Bulldogs played in the first round later that same day and lost to top-seeded Ardsley, 17-0, to finish 11-11 on the season. 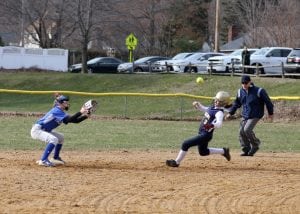 Beacon’s Madison Scharchilli (3) heads to second in a game in April at Haldane. (Photo by Scott Warren)

The girls’ lacrosse team, which finished 2-12, did not earn a playoff berth. 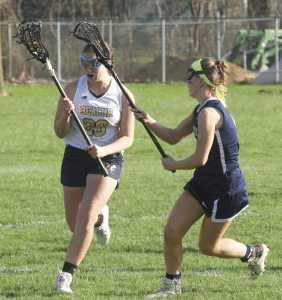 Grace Affeldt of Beacon in a game against Lourdes (Photo by S. Pearlman)

The track and field team will host the Section 1, Class B championships today (May 25) at the high school. On May 21, the girls’ team finished second in the Northern County Championships, behind Arlington.

Junior Georgy Bekh, who last year was named to the Poughkeepsie Journal All-Star Team, qualified for sectionals but did not reach the championship round.