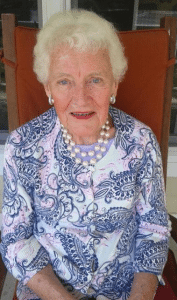 Alice was born in Cold Spring on March 21, 1929, the daughter of Lawrence Martin and Alice (Burns) Reilley. She graduated from Haldane High School in 1946 and from the New York State College for Teachers in Albany in 1950.

Alice was a high school business teacher who began her career at Arlington High School in Poughkeepsie. She married James Joseph Schatzle in 1956. Once they started their family in 1957, Alice left teaching to become a full-time mother to their four daughters. This was the “job” that she enjoyed the most and took the most pride in.

In 1970, Alice and her daughters moved to Cold Spring. In January 1971, Alice became the business teacher at Haldane High School. She retired in 1991 and continued to live in Cold Spring until 2012, when she moved to Long Island to be closer to her daughter Beth and her family.

Alice was an active parishioner at Our Lady of Loretto and served on the board of the Butterfield Library for 22 years. She also was a member of a weekly bridge club from the early 1970s until 2010.

Over the years, Alice volunteered on various Village of Cold Spring planning committees, drove for FISH (a volunteer group that drove people to doctor’s appointments) and assisted with the Hospital Auxiliary, Putnam County Historical Society and Garden Club.

Her favorite pastimes were traveling, reading, going out to eat, attending the theater or a concert, walking around Cold Spring with her friends, attending monthly luncheons with other retired Haldane teachers, bowling in a league with friends from Haldane, and entertaining her family and friends.

She is survived by her daughters, Mary Alice Schatzle (Glendowlyn Howard) of Durham, New Hampshire; Beth Ramme (Donald) of Huntington; and Katie Clausius (Dale) of Clarklake, Michigan. She also is survived by her son-in-law, Jeff Rohan of Pawling, and her 10 grandchildren: Allison, Colleen, Bryan and Caroline Ramme; Cory, Jamie and Benjamin Clausius; and Geoffrey, Adam (Rebecca) and Megan Rohan.

Memorial donations may be made to the Alice Reilley Schatzle Memorial Scholarship Fund, c/o Beth Ramme, 7 Gaines Place, Huntington, NY 11743, to the Butterfield Library (butterfieldlibrary.org), or to a favorite charity.