Third-graders from the Beacon City School District performed in the 29th annual Calico Ball on June 6 at the high school’s Seeger Theater. The event is a multi-cultural celebration of dance and music where each class performs in costume from a different country. It was launched by Pete Seeger in 1989 and is sponsored by the Beacon Arts and Education Foundation. 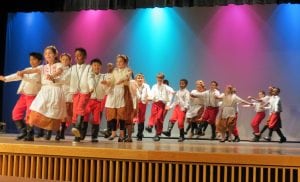 The performance opened with a South African folk song by the Beacon High School Chorus under the direction of music teacher Susan Wright, followed by 12 dance routines. Classes from South Avenue Elementary performed the Bembalay from Jamaica, the Mexican Hat Dance, the Hadrami from Yemen and the Plena from Puerto Rico. 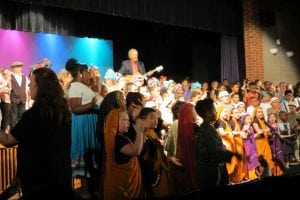 Tom Chapin leads the students in a sing-a-long at the close of the Ball. (Photo provided)

Folk singer/songwriter Tom Chapin closed the performance with a sing-along of two of his songs, “This Pretty Planet” and “Walk the World Now, Children,” accompanied by all of the students.

The district also recognized JV Forrestal third-grade teacher Carol Salvas, who has attended 28 of the 29 Balls.