During low tide recently at Denning’s Point, my sister, Diane, and I walked onto the mud flats on the bay side of the Point to take a photo of the ruins of the old cider mill. Suddenly I heard, “Oh, yuck!” We had both been hit by a huge splat. I looked up and saw the culprit: an eagle perched near the top of a giant oak.

The eagle must have watched us for some time as we worked our way across the sand and muck. Its dropping was perfectly timed.

The incident brought to mind a 1933 book by Edwin Kent, Isle of Long Ago: Sporting Days, in which he reminisced about hunting eagles on Denning’s Point in the late 19th century. 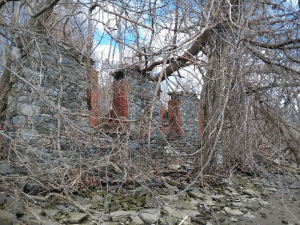 The ruins of the cider mill at Denning’s Point. Don’t look up. (BHS)

“When the ice in the river broke up, generally about the second week in March, the eagles came in numbers to Denning’s Point,” he wrote. “I have counted 20 sitting on the trees overlooking the marsh, at low tide bare mud flats. Of course, it was incumbent of me to shoot an eagle [although] I am not proud of the feat or the method I used.

“The eagles would not permit a man on foot to come anywhere near them but paid no attention to a wagon, so enlisting the services of one of my brothers and of an old mare who was indifferent to the report of a gun, we drove under an eagle sitting on a tree at the narrow neck of the Point. The bird, sorely wounded, fluttered down and lit on a cake of ice in the river some 20 yards out. Over my waist in ice water, in no pleasant frame of mind, I took my gun and slew him with a vengeful shot. He was a good-sized specimen, 78 inches in spread of wing.”

Kent lived long enough to see the eradication of the bald eagle on Denning’s Point and elsewhere. He was not surprised. “I was told by a man who killed some 10 or 15 of them that he received $10 for each bird.”

The ill deeds of our forefathers sometime fall on our own heads. I did not mind being pooped on by an eagle, though. In a way, you feel special.

F. Scott Fitzgerald was hopeful that Beacon psychiatrist C. Jonathan Slocum could help his beleaguered wife recover from her third nervous breakdown. “You are perhaps the best man to help Zelda,” he wrote to the doctor in 1934, nine years after the publication of The Great Gatsby. 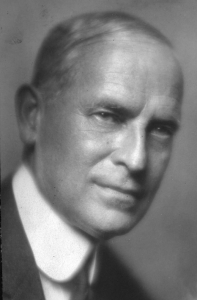 Dr. C.J. Slocum was considered a pioneer in the field of mental health. Patients at his Craig House Sanitarium could enjoy nature walks, swim, do crafts and immerse themselves in the landscapes of the former Sargent and Howland estates.

Zelda Fitzgerald, a novelist, painter and dancer, was admitted on March 8, 1934. Her letters to her husband from the sanitarium tell of productive, happy hours painting, writing an article for Esquire, and playing golf on the sanitarium’s nine-hole course.

“This is a beautiful place,” she wrote. “I have a little room to paint in with a window higher than my head — the way I like windows to be. And my room is the nicest room I’ve ever had, any place, which is very unjust [to you] considering the burden you are already struggling under.”

The “burden” was the cost, $175 a week, or about $3,300 today. Scott wrote to Slocum, asking how long his wife should be expected to stay. If it was more than a few months, he said, he would need to go to Hollywood to write for the movies. He didn’t have to do that, as Zelda stayed only nine weeks.

Scott died in 1940, at age 44, of a heart attack, and Zelda was killed seven years later in a fire at a hospital in Asheville, North Carolina. The letters she and her husband wrote while she was at Craig House are preserved at Princeton University.