Bear Mountain will get ceremonial name

A proposal to attach a ceremonial name honoring Purple Heart recipients to the Bear Mountain Bridge passed both the New York State Assembly and Senate and awaits the governor’s signature. 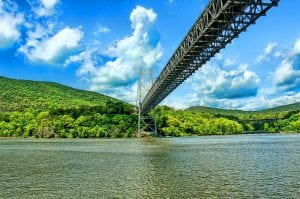 Introduced in the Assembly by Sandy Galef, a Democrat who represents Philipstown, and in the Senate by Bill Larkin, a Republican from Orange County, the bill designates the span on signs as the Purple Heart Veterans Memorial Bridge but will not change its official name.

Galef said she and Larkin chose the Bear Mountain Bridge for the designation “because it connected our districts, and is the main route from the east and west where important landmarks associated with our military are located such as Camp Smith, West Point and the National Purple Heart Hall of Honors” in New Windsor.