Paulette Myers-Rich wants people to touch her art. Even flip through it.

With her husband, David Rich, this past September she opened The No. 3 Reading Room & Photo Book Works at 469 Main St. in Beacon, where she displays and sells handmade artist’s books, works on paper, photobooks and poetry from independent presses.

“I’m a trained librarian and I love to talk to people who pop in,” she says. “I want people to be able to handle the books. The ‘so precious it can’t be touched’ thing does not apply here. The material is part of the content, as is the structure. A well-made art book should be designed to be handled. So often the works are only seen in a controlled environment, under glass.” 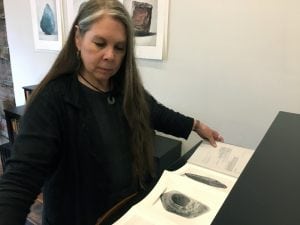 The next exhibit, Purgatory Pie Press, 40 Years and Counting, opens on Second Saturday, July 14, and features the work of Esther K. Smith and Dikko Faust, letterpress and book designers in New York City. The gallery is open from noon to 6 p.m. on Saturdays and Sundays.

Other parts of the building host Myers-Rich’s workspace, where, under the banner Traffic Street Press, she creates art books, and Rich’s second-floor painting studio, which is open from time to time for film screenings, concerts and exhibits. The couple also lives on the premises.

Realizing that many people are not familiar with the term artist book, Myers-Rich breaks it down:

Artist book = a book made by an artist
Book art = book made for art
Book arts = binding, typesetting, printing (the components to make books)

Myers-Rich began her career studying experimental filmmaking in the 1970s, then photography. She changed course when she was accepted as an intern in the papermaking studio of the Minnesota Center for Book Arts.

“I was doing sculptural photos, so this fit right in,” she recalls. “At that time artist’s books was a new genre that came out of the Fluxus movement, in which artists, poets and people who made multimedia works used the book as a structure to document their happenings. I saw a structure where I could intersect narrative and photos. I adopted it as my form. It introduced me to a lot of craft practices.” 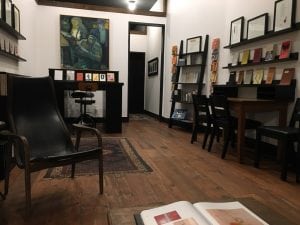 Inside the No. 3 Reading Room at Photo Book Works (Photo provided)

The genre was dependent on nearly-obsolete machinery, which Myers-Rich began to acquire. “Letterpress was going out of fashion,” she says. “Because it’s so heavy and takes up space, people were happy to get rid of it.”

She feels the digital age has led people back to the tactile. “When I started, dragging heavy equipment, people thought I was out of my mind,” she recalls. “Now there’s so much activity in micropresses, many of which stemmed from graduate students getting together and becoming micropublishers. It started with zines and graphic novels, which are a gateway into book art.”

Myers-Rich and Rich spent decades teaching in Minneapolis before moving to New York City to join “the greatest community of artists,” which was no easy feat, given the literally tons of equipment they own. It was impossible to find an affordable studio large enough in the city, “so we drew a 50-mile circle and started exploring the Hudson Valley.” 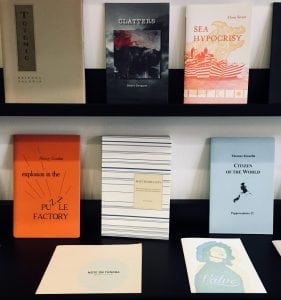 Books on display at No. 3 Reading Room at Photo Book Works (Photo provided)

They purchased the Beacon building in January 2016 and completed a gut renovation that took 14 months.

“We’re really thrilled with the art community — it’s so welcoming,” Myers-Rich says. “I grew up on the bluffs of the Mississippi River, and I also love that it’s an hour to the city. Beacon has a pretty complete ecosystem for my needs.”

For Myers-Rich, the public portion of their space is not about business but “about artists being able to have a social practice, which means going out into the community. I have regulars now. People come in and sit and read. People who respond to what we have here love books; it’s a common denominator.

“Some people are shy, but they learn a whole other side of what a book can be,” she says. “Some peek in, look around for a second then leave. Or, they really spend time with the work. There’s an energy to books. They’re important because that’s how a culture survives.”