Bernadette and Michele Humphrey-Nicol, a married couple from Beacon, are two of the company of 39 “citizen actors” who will bring a new play, Rip Van Winkle; Or, Cut The Old Moon Into Stars, to life over Labor Day weekend.

The actors, together with three professionals from HVSF, have worked for months with Seth Bockley, who was commissioned to write and direct the play. Like the HVSF production two years ago of Thornton Wilder’s Our Town, it is the centerpiece of the Hudson Valley Shakespeare Festival’s efforts to engage local communities. 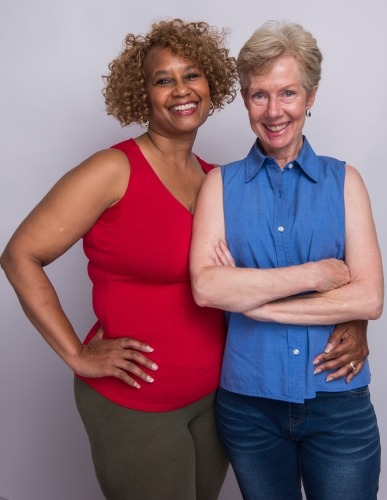 Tickets for the free performances, which take place on Aug. 31, Sept. 1 and Sept. 3. at Boscobel, in Garrison, and on Sept. 2 at the University Settlement in Beacon, have all been distributed. But HVSF recommends showing up during the hour before each show to get on a waitlist. There are no guarantees but usually no one is turned away.

Bernadette, a Brooklyn native who is a manager with the MTA, played Mrs. Gibbs in Our Town. But this is the HVSF debut for Michele, a physical therapist who grew up near Dayton, Ohio.

Bernadette, what enticed you to audition for Our Town?

The opportunity to perform “under the tent” at Boscobel. But once I heard that it was Our Town, I thought that my race and ethnicity would preclude me from being cast. Michele convinced me to audition.

Michele, what were your feelings, seeing Bernadette onstage?

The first time I saw her perform in a major role was a performance of For Colored Girls in Beacon. She blew me away. I came to see each performance of Our Town — I couldn’t get enough of it. I was so moved by Bernadette’s performance; it appeared as if she became Mrs. Gibbs.

What motivated you each to audition?

Michele: I was anxious and apprehensive to return to the theater but motivated by Bernadette’s positive experience with Our Town. So far, I am pleased with my decision.

Bernadette: Our Town was such a wonderful experience. 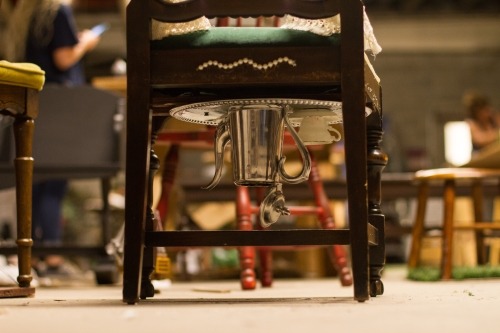 What else have you done?

Bernadette: I have been in a number of productions in the Hudson Valley: The Seagull, For Colored Girls Who Have Considered Suicide/When the Rainbows Is Enuf, Farragut North, Blythe Spirit and Our Town.

Michele: My mother took me to ballet class from second to sixth grade, but I was kicking and screaming. Then, at 15, I saw A Chorus Line, which made me want to dance — I didn’t know that you could dance like they did in this show. I plowed full speed ahead and moved to New York City to dance. I had a career in musical theater for about 15 years and performed in productions of West Side Story, Evita and Music Man. I was Victoria, the white cat, in the national tour of Cats and finished my career with a show in Germany.

What characters do you play in Rip Van Winkle?
Bernadette: The Sea Captain. He likes to play games to relieve stress. Also, a villager.

Michele: A villager and a dancer.

Did it feel intimidating acting in scenes with the professional actors?
Bernadette: I was not intimidated this time around.

Michele: The professional actors quickly put everyone at ease. Their talent helps to bring up the level of all of the players. 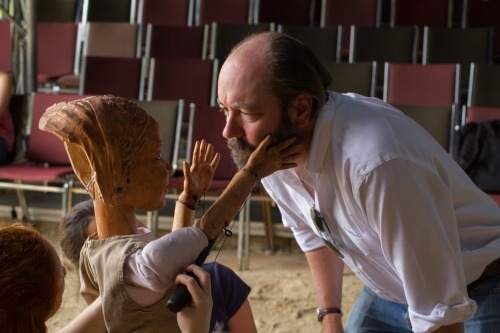 Liam Craig rehearses under the tent at Boscobel with a co-star. (Photo by Tony Brickner)

Does the story resonate with the modern world?
Bernadette: I think so. Rip Van Winkle comes home to find the things and places he took for granted no longer exist. It parallels the current political climate in regards to civil liberties. Liberties that we take for granted are in jeopardy.

Is there anything you would change about the process?
Michele: For the first two weeks of rehearsals we started the sessions with acting exercises. I found them stimulating — a play time for adults. The exercises make you push yourself and, if working with others, bonds and connections are formed. I would have loved to continue with these throughout the entire rehearsal process.