Mid Hudson Animal Aid, a no-kill cat shelter that opened in Beacon in 1990, says it likely will close early next year due to lack of funds.

The shelter continues to raise money but fundraisers and individual donations haven’t brought in nearly enough to cover the $300,000 it needs annually to run the facility, about a third of which goes to medical expenses for the animals, said Mary Petruncola, the board secretary for the nonprofit. 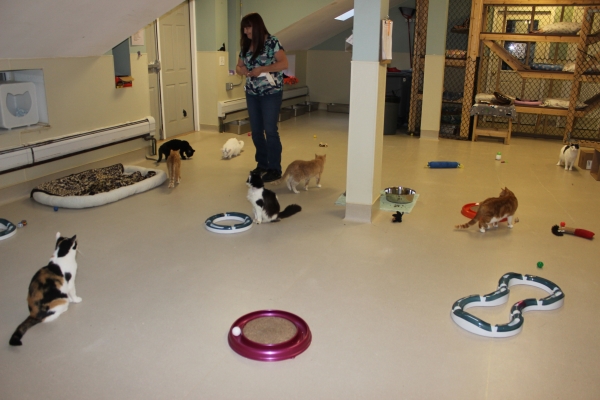 A volunteer prepares to dole out dinner to the cats living in the Great Room. (Photo by A. Rooney)

As a result, the shelter has stopped accepting new animals, said Petruncola, who, with her husband, Don, the board president, have been volunteering at the shelter for 27 years. The Simmons Lane facility, which can accommodate up to 170 adult cats, currently houses 88. (Kittens are sent to foster homes.)

Petruncola, who is a music teacher, spends so much time at the shelter that she knows most of the residents by name. During a recent visit, she gave a running commentary, including the history of most of the cats. “Here’s Willie,” she says. Because of a serious eye injury, a local shelter couldn’t take him. “He had an eye removed and spent weeks in a cone,” she said. “He was feral, and now he sits and interacts. He’s the epitome of what this shelter is all about.”

She noted it’s difficult for a shelter to be self-sustaining when it’s not attached to a municipality or a larger organization such as the American Society for the Prevention of Cruelty to Animals. Many of the grants it could receive are by invitation only or directed to groups that trap, neuter and release wild cats. She said the shelter also has high costs because it is one of the few in the state that accepts cats with leukemia or immunodeficiency virus.

“Most shelters don’t have the facilities to handle these cats separately, and they wind up being euthanized,” she said.

Despite cost-cutting measures such as reducing visiting hours, offering discounts on adoption fees for cats older than a year, sending some blood tests to labs directly instead of through veterinarians and asking more of volunteers, she said the shelter’s accounts have been slowly draining.

“A number of vets help us, and they are very generous with discounting their services, but when we have an intake of a cat, we don’t know what will be in store, medically, or if they will ever be socialized enough to be adopted,” she explained. “We have a small paid staff, who don’t earn a competitive wage, because we can’t pay them more. 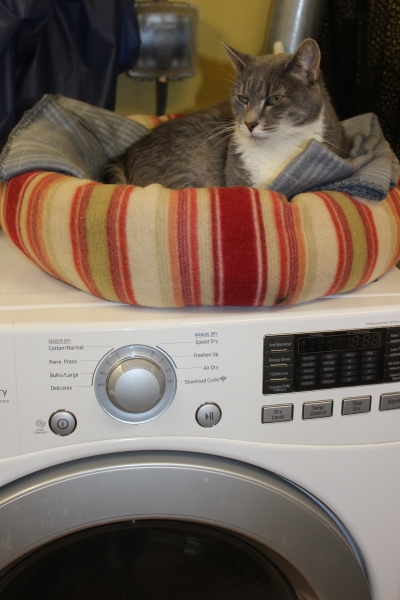 Atop the whirring dryer is the preferred spot for this resident. (Photo by A. Rooney)

“Our manager does morning and evening rounds administering medication. We have a live-in caretaker who gets paid in room and board and who happens to be a vet tech with the ability to triage and determine whether there’s a need to go immediately to an emergency clinic.”

The shelter needs help every day, including when it’s not open to the public. “We especially need people to come between 9 a.m. and noon to clean,” Petruncola said. “Some people think volunteering is sitting around, interacting with the cats, but we don’t need that — we need help with the less pleasant but essential jobs which go along with taking care of so many cats.”

Mid Hudson Animal Aid was founded in 1979 in Newburgh by Essie Dabrusin and Ruth Valenti, who rescued dogs and cats that they cared for in their basements. In the late 1980s, the City of Beacon gave land to the Animal Rescue Foundation, an unaffiliated shelter for dogs and cats that offered MHAA space to build a structure. It opened in May 1990 with 15 cats.

Inside the facility, the Great Room is filled with beds, feeding stations, catwalks, baskets and toys. There are no cages. There is also an enclosed porch, an area for cats with leukemia or other medical needs, a room for cats who don’t function well in groups and a visitor’s room.

While some wild cats at the shelter will never be ready for human companionship, Petruncola said, the volunteers and staff do all they can to socialize them through a program called Feral Friends in which someone is assigned to regularly devote time with the animal to build trust. “People often misunderstand what a feral cat is. It doesn’t imply aggression, just that they’re unused to people,” she said. “We’ve turned around a number of them” that have been adopted.

She said the focus of the six-member board is to keep the place running for as long as possible. It has raised $20,000 through an online Go Fund Me campaign, “which is fantastic, but doesn’t even cover a month” of expenses, she said. Its cash reserves have been liquidated. “We’re pulling out all the stops, but it’s hard because social media is saturating people with requests for donations for all sorts of causes. If we can manage to get six months’ worth of funding for expenses, it will give us more planning time.

“People say, ‘Get grants or find a famous, wealthy person,’” she added. “I don’t know any famous people, because I’m always here! We have a restructuring plan, and we are trying to stay optimistic. If we’re going down, we going down kicking and screaming.”