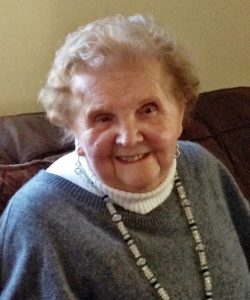 Born Feb. 6, 1929, at Peekskill Hospital, she was the daughter of Thomas (“Til”) and Kathryne (Keck) Clune. She was raised in Manitou, a hamlet of Garrison, and attended the one-room schoolhouse there. She attended high school in New York City and later earned degrees from St. Joseph’s College and St. John’s University in secondary English education and guidance counseling.

Jean married Thomas Hoffman in 1951, who died in 2011 after they had been married for 54 years. As the family story goes, they met on a blind dinner date while they both attending night school. He forgot his wallet, so Jean had to pay and would joke she has been waiting for repayment ever since.

After a 20-year maternity leave, Jean returned to teaching English at Thomas A. Edison Career and Technical Education High School in Jamaica, Queens, and was later a guidance counselor there. One of her colleagues called Jean “irreplaceable,” because she always went the extra mile to assist a student, co-worker or parent.

Although she spent her weekdays in New York during her school years, and later lived for more than 50 years in Forest Hills, Queens, Jean always said part of her heart remained on Manitou Station Road. After suffering a stroke in 2011, she returned to Manitou to live in her childhood home. It was not until 2012 that Jean learned Manitou is a Native American word that means “great spirit.” Her family liked to say she carried that great spirit wherever she went.

After returning to Manitou, Jean became a member of the Mother Lurana Senior group, sang with the Hotsie Totsies, attended Our Lady of Loretto in Cold Spring, and befriended the sisters at Graymoor in Garrison. You could find her each Friday at Robert’s Salon (now SoHo Salon) in Cold Spring, sipping her coffee. She filled the Manitou home with her great spirit at family dinners, parties and other gatherings.

Jean was a great fan of Notre Dame football. She also loved her morning cup of coffee while reading The New York Times, a good movie, a challenging crossword puzzle, coffee ice cream and the beach. There was always room at the table at her signature Sunday dinners.

Jean is survived by her children: Louise, Gregory, Paul, Dorothy, Joseph, Helen, Francis, Jim, Mary, John and Kathy, and their spouses, along with 24 grandchildren and four great-grandchildren. Two sons, Thomas (1955) and Stephen (2001), died before her.

Over the past few years, as her abilities slowly declined, her family says Jean maintained her grace, dignity and quick wit. As her hospice chaplain was leaving one day, he said, “God bless you, Jean.” Without missing a beat, she replied, “He did!” That was Jean Hoffman!

Memorial donations may be sent to the Franciscan Sisters of the Atonement, 41 Old Highland Turnpike, Garrison, NY 10524 (graymoor.org).