The Philipstown Vikings (U10 boys) competed in the town of Poughkeepsie’s 30th Annual Columbus Day Tournament on Oct. 6, playing a total of four 25-minute matches.

In their first match, the Vikings took a 1-0 advantage over the Castleford Comets when defender Oliver Choi sent a precise free kick into the goal. But, the Comets would score, too, and the game ended in a 1-1 tie. 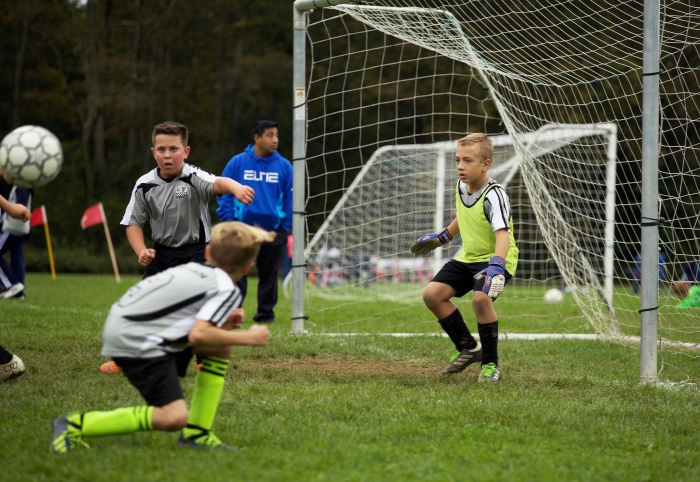 Goalie Trey Murphy keeps his eye on the ball as Joey DeMarco and Parker Larsen (ducking) clear the way. (Photo by Sheila Williams)

The Vikings overwhelmed the Poughkeepsie Burners with Rhys Williams, Darwin Saquipay, Parker Larsen and Jack Fitzgerald each contributing a goal to the 4-0 victory.

The East Fishkill Extreme took an an early 1-0 lead over the Vikings who responded with goals by Darwin Saquipay, Parker Larsen and Elias Moran for a 3-1 advantage. Undaunted, the Extreme answered with two goals to end the match in a 3-3 stalemate.

Lastly, the Vikings faced their toughest challenge: the Everton America CT, an affiliate of the Premier League’s Everton FC.  In a gritty performance, the Vikings stood down the previously unbeaten and eventual tournament champions. A goal by right wing Parker Larsen secured a 1-0 win and a second-place finish. The defense was led Joey DeMarco and substitute goalie Trey Murphy.