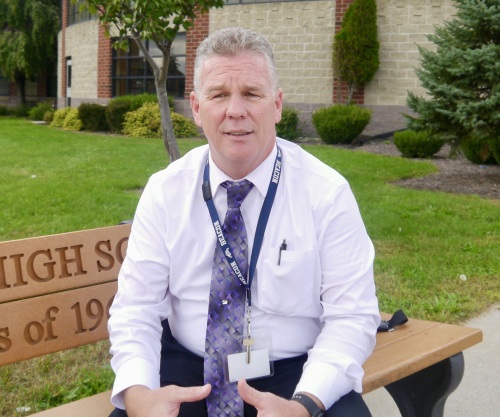 Mark Thomas was hired in July as the Beacon City School District’s first director of security.

A Yorktown Heights-based consulting firm, Altaris, was hired by the district to conduct a security audit. What did it find?
I was the liaison, so I took Altaris to every school, where they met with administrators and security personnel and checked to see if we met state requirements. They didn’t find any major issues but they made recommendations for how to tighten security.

Most of the schools already have a double-door, single point of entry where we can vet visitors before they come inside. Glenham is the only one that would have to build that on. We have people at all the main entrances, and we also have the Raptor system, which scans your ID and prints you a badge. The single point of entry filters everyone who comes through. Altaris wanted to enforce that so a school is not a fortress, but it’s also not an open campus where you can walk in any door.

What kind of drills do students go through?

We have lockdown drills. The students are getting more accustomed to them, so there’s not as much of a fear factor. We try to change things up to make them more realistic, too. These have become like fire drills, and if you think about it, we haven’t had a death or an injury in a fire in a long time.

I try to be at every school at least once a day. If I miss a school, I start with it the next day. At the beginning of the year, I wanted to make sure I saw every dismissal and arrival, and now I’m making the few changes that needed to be made.

How does the district communicate with parents and police?

The district is good about getting emails and robo-calls out to parents, and we have the police on our radios for emergencies. We still call 911, but if 911 were to get flooded, having direct access to the police in Fishkill and Beacon is a second layer of safety. We had no cell phones or landlines during the storm in May, so we used these radios to communicate between the schools. With the police departments, they’re only to be used in emergencies.

How has your interaction with students been?

Good. I grew up here, have had my own kids go through the schools and have been involved with coaching. I know a lot of the students and their parents, so for me to talk to the kids has never been a problem.