The focus was Philipstown during a forum last week at the Desmond-Fish Library in Garrison featuring candidates for Putnam County executive and county legislator.

Sponsored by the grassroots Philipstown Community Congress, the Friday (Oct. 26) gathering drew about 100 people. The questions posed by organizers reflected responses to a 2017 PCC survey in which more than 750 residents voted on a list of local priorities (see below).

County Executive MaryEllen Odell, a Republican, and her challenger, Kent Supervisor Maureen Fleming, a Democrat, fielded questions about creating more biking and hiking paths; protecting the water supply and having the county share the sales tax collected in its towns and villages.

When asked about hike-bike paths, Odell did not address the topic specifically but cited the economic importance of tourism and emphasized road safety. She said the county provided the trolley to carry visitors and residents to popular destinations and reduce foot traffic along dangerous roads, and hopes to divert visitors from Breakneck Ridge and Route 9D to Fahnestock State Park, on Route 301.

She also advocated continued discussions with New York State agencies, the Metro-North railroad, the public, and others on constructing the Hudson Highlands Fjord Trail, designed to parallel 9D, the train tracks, and river between Cold Spring and Beacon. 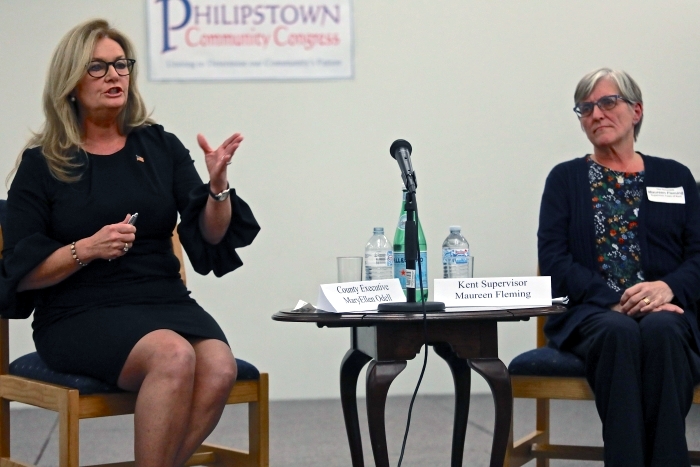 MaryEllen Odell and Maureen Fleming at the Oct. 26 forum (Photo by Ross Corsair)

Fleming said that as supervisor in Kent, which is known for its lakes, she has not had much opportunity to promote a hiking-biking trail network. But she noted that she uses the eastern Putnam hiking-biking trail and wants to cultivate interagency and multi-governmental efforts to provide similar paths in western Putnam, especially alongside rail tracks, and to involve the public.

Discussing water, Fleming called for more county attention to wastewater management through extension of sewer lines to places, such as Nelsonville, that lack them. Nelsonville has begun reviewing the feasibility of connecting to the Cold Spring wastewater-sewage treatment system. “I’d try to facilitate that,” Fleming said.

She also referred to Philipstown’s concerns last year about county application of herbicides along a road near a Cold Spring reservoir. “I’d discontinue use” of it near water supplies, she said.

Odell mentioned road salt as a hazard, saying “we have to change that” habit of salting roads in winter. Putnam has decreased its reliance on salt and been switching to brine, which is safer, Odell said. Likewise, she said, the county has increased its efforts to limit stormwater runoff, which can carry salt, lawn chemicals, and other pollutants into backyard wells and public drinking water.

These proposals received the most points on a ballot completed by 755 Philipstown residents a year ago. For details, see bit.ly/pcc-results.

The two resumed their debate on sales tax sharing, which they discussed at a forum sponsored by the League of Women of Putnam County eight days earlier.

Unlike most counties in New York state, Putnam does not return a portion of sales tax to the municipalities where it is collected. Sales tax revenue accounts for $60.5 million, or about 38 percent, of the revenue in Odell’s proposed $159.8 million budget for 2019.

“I’ve spent quite a lot of time explaining that the county shares $5 million” with municipalities by paying state community college costs, election-related expenses and similar charges, and covers school taxes when property owners default, Odell said. “We do share sales tax in our services.”

She said the Philipstown area generates about $1.5 million in sales tax. If sales tax returned to municipalities, “we’d have to raise property taxes,” she said. As an alternative to sharing, “what we can do is to continue to be good partners” with towns and villages, she said.

“I don’t know that it’s absolutely true” that Putnam cannot share sales tax, Fleming countered. “Supervisors of all the towns have broached this with the county. It’s an especially big issue in Philipstown” but also important in towns in eastern Putnam with larger commercial bases, she said.

Fleming pegged the Philipstown sales tax share as $2 million to $2.5 million. As county executive, Fleming promised, she would investigate ways to cut the county budget and determine if sales tax revenue could be shared, at least incrementally.

The organizers also asked the candidates about ways to reach local goals.

Fleming urged citizens to stay active and contact elected officials. In Kent, “my door is always open,” she said. “That’s what county government should be.”

Limiting it to seniors “is patently unfair,” Odell said. Several years ago, she recalled, when county, Philipstown and Cold Spring officials talked about opening a center, they agreed it could serve the whole community and accommodate some county agencies. “You guys can help me do that,” Odell said.

District 1 Legislator Barbara Scuccimarra, a Republican seeking re-election to her third, three-year term, and her challenger, Philipstown Town Board Member Nancy Montgomery, a Democrat, both said they saw a need for more teen services.

“Identifying a space is the big problem,” Scuccimarra said. Using the senior center at hours when the seniors are not there is a possibility, she said. Another potential site would be the American Legion on Cedar Street, where the seniors currently meet, but “the veterans haven’t had that space to themselves for a long time. They’re very protective of it,” she said.

Until the location is resolved, she recommended creating a bus service to take teens to the Philipstown Recreation Center in Garrison and to teen programs elsewhere in the county.

“We can certainly get space. It’s available” in Philipstown, Montgomery said. “I see it as more of a programming than a space” matter. She proposed expansion of county anti-drug and teen programs to western Putnam.

The organizers asked Montgomery and Scuccimarra about the county sharing of services with schools and about school consolidation. Philipstown has two relatively small schools, Haldane (827 students in grades kindergarten through 12) and Garrison (207 students in kindergarten through 8). For high school, Garrison residents can attend Haldane or James O’Neill High School, in Highland Falls. In addition, a sliver of Philipstown at the southern Putnam border is in the Lakeland school district, based in Westchester County. 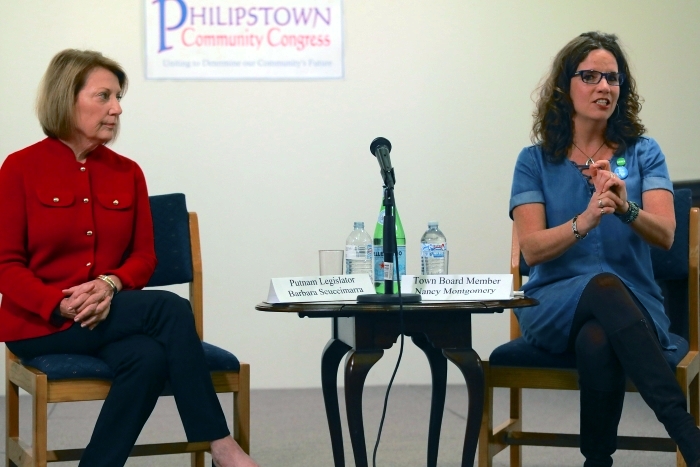 “I will be the biggest advocate” of sharing of services between the county and school districts, particularly for such things as purchasing, technology, snow plowing and transportation, and personnel, Montgomery said.

She observed that district consolidation “is a very contentious subject,” on par with consolidating fire departments or promoting more fire department sharing, topics which she favored exploring and which the Town Board took up in 2010, only to prompt bitter opposition and a townwide brouhaha.

“There are territorial issues, cultural issues” in school consolidation, Montgomery remarked. She said the state provides grants for studying the feasibility of consolidation and that she cannot take a position on the issue until the community undertakes such a review. But she said that she will help facilitate a discussion of consolidation, if the public wants one.

Scuccimarra said the attitude seems to be that “it’s Garrison” or “it’s Haldane. There’s no sense of community. That’s sad.” She pointed out that with its relatively few students, Garrison “is like a private school. Some people like that.” Moreover, if Haldane and Garrison merge, school taxes in Garrison probably would increase, she added. “There’s a lot of pros and cons” either way, she said. She urged the schools to talk about consolidation.

Both candidates expressed willingness to support Climate Smart Community goals, such as reducing the use of fossil fuels, and to address flooding and other disasters exacerbated by global warming.

“We are stewards of the land,” Scuccimarra said. In chairing the Legislature’s Health and Environment Committee, she said, “I’ve been able to bring forward a lot of initiatives in this area,” including banning plastic foam cups from county facilities. But “sometimes it takes the Legislature a few times before they really get it.” Putnam County also plans a solar energy installation, is getting rid of its diesel vehicles, and is reducing its car fleet overall, she said.

Montgomery noted that the Town Board is pursuing steps to make Philipstown a Climate Smart community. If elected, she said, she would push the Legislature to make the county Climate Smart as well. As part of an overall program, she proposed use of clean-fuel buses, creation of cross-county bus transportation, and similar actions, and termed Climate Smart measures economically as well as environmentally rewarding.