Dirt so valuable it’s illegal to remove it

It’s not a tourist attraction — yet — but just over the Hudson River, in Orange County, lies 26,000 acres of the most fertile soil in the U.S.

Known as black dirt, it’s so valuable for farming that it has long been illegal under New York State law to remove it from the region. The soil spills into New Jersey, where there is no law, and deep canyons filled with murky water mark spots where it has been trucked away for gardens.

So many visitors ask if they can buy chernozem (Russian for “black dirt” — it’s also found in the Ukraine and other places around the world) that Chip Lain, a sod and soybean farmer, bought a franchise to legally mix a rich soil from a recipe of composts. He sells it by the cubic yard as Big Yellow Bag Black Garden Soil.

Like all the dirt in the Hudson Valley, the black variety was created by a glacier. As it melted, “islands” formed in the vast, murky swamps. Vegetation would grow, die and sink under the water, which shut off the air and prevented rapid decomposition. Thousands of generations of water plants, weeds and sedges, shrubs and trees, all gradually decomposing, created layers of organic matter. Dry periods would encourage growth, followed by flooding. This soil developed at a rate of about a foot every 500 years. 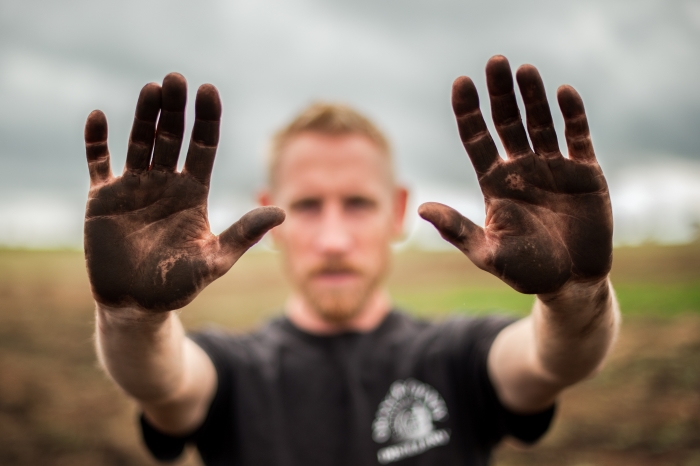 John Glebocki shows off the prized black dirt found on his farm in Goshen. (Photo by Damon Jacoby)

Thousands of years of flooding by the Wallkill River, which winds like a tangled brown ribbon through the plain, contributed to the continuous accumulation of organic matter. The area was known as the Drowned Lands until European settlers in the 1770s started the arduous, 100-year process of draining the swamp and turning it into arable farmland.

Compared with the typical topsoil depth of 2 to 8 inches in most of the U.S., the muck in the Black Dirt region is 10 to 30 feet deep. Most of the soil is 30 percent organic matter, and some of it as much as 90 percent. Elsewhere a farmer would be satisfied with 5 percent.

There is a downside. When the dirt is dry, it becomes so powdery that the wind can whip it into swirling dust funnels that can be highly combustible (farmworkers are advised not to smoke in the fields). To prevent that, most farmers grow cover crops in the spring and fall.

More helpful to farmers, the black dirt retains moisture. As children of the region love to demonstrate, if you jump on the damp soil in the spring it shudders like a bowl of gelatin. It holds nine times its mass in water, which is great when there is a drought. The muck is so moist that it’s difficult to build on, which has dissuaded development. (The state considers the region to be wetlands, which also makes it difficult to propose condos.) Farmers’ homes and barns are built on higher ground.