Farmers adapt to climate change, and push back

As it turns out, dirt and trees may save us.

According to a new study, agriculture and reforestation have the potential to offset and reduce greenhouse gas emissions that contribute to climate change at rates that could be the equivalent of taking every car off the road.

Storing more carbon in the soil is the key. The good news is that it can also help farmers become more profitable by increasing yields and reducing the risk of damage and losses related to global warming.

In the Hudson Valley, average temperatures have increased 2 degrees in the past 30 years and winters are warmer by 5 degrees. It’s part of a crisis of warming oceans and melting glaciers that has subjected the world to more frequent and intense storms, heavy downpours, and erratic and unseasonal temperatures.

This season was a good example of the predicament facing local growers: Hot, dry conditions early in the season, followed by some of the rainiest months from July to September. Quick, irrigate! Quick, drain your fields!

For young farmers such as Sarah Ficken, 29, and her husband, Chris, 31, climate change was one reason they founded New Moon Farms in upstate Munnsville in 2012, where they have a herd of 68 Jersey cows and run a Community Supported Agriculture (CSA) program with 15 to 20 shares. 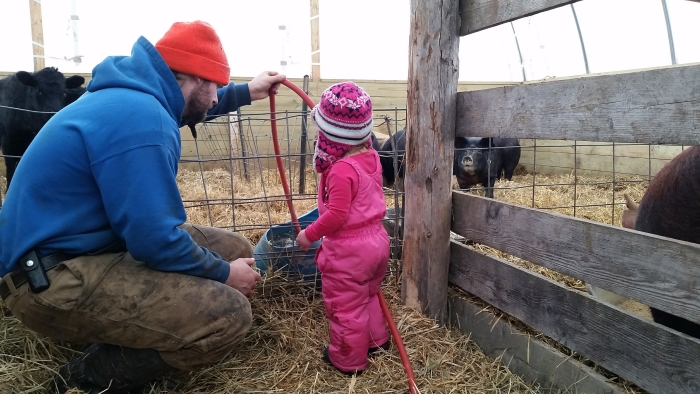 The couple said they bought land in Madison County because areas farther south will be too hot in 50 years. Their barns take advantage of prevailing winds to cool the inside and their hilltop location helps with drainage after severe storms. And, equally important, they tend to their soil and livestock in a way that reduces the carbon released into the atmosphere.

It’s called “sequestering carbon,” and it’s made headlines. Basically, it’s the process where plants take in the gas and draw it through their roots into the soil, where it’s held in place by organic matter. When soil is plowed or disturbed by digging, the carbon is released as gas. Farmers who don’t till the soil during planting and harvest leave the soil, and carbon intact. The Fickens place composted manure on top of the soil to trap more carbon.

After a barn fire, which Sarah described as the “worst best thing that could have happened,” they rebuilt to make better use of a most important resource: cow poop.

Their cows live in compost-bedded pack barns. There are no stalls. Instead of having to continually clean out manure, the floor is covered with 1 to 2 feet of bedding. It needs to be aerated and added to daily but otherwise stays in place until a biannual clean out.

“It mimics pasture, keeps them clean, and we can store all of our manure to use when we need it,” Sarah explained. For example, they use the manure on their own fields after a hay crop is harvested.

As the couple have improved their soil over the past five years, they’ve seen increased yields. “We prevent erosion, can get crops off the fields when we need to, and we’ve noticed significantly less runoff from major storms,” Sarah said. They use cover crops to keep their fields planted year-round and to add nutrients. 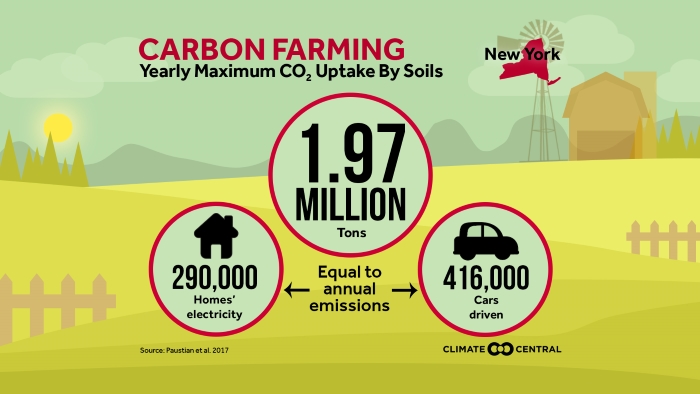 The effects of no-till farming and cover crops by local farmers in New York State, according to calculations based on a 2017 study. (Climate Central)

A number of projects underway in the Hudson Valley demonstrate the potential of soil as a carbon sink. Regen Network, a global contracting platform, proposes using blockchain technology to store data from farms that are using regenerative agriculture to improve carbon retention and soil health. Glynwood is participating on the steering committee and may participate with Regen’s proposed incentive program to use cryptocurrency for investors to fund farms that meet certain protocols. Hudson Carbon is a research and education project based at Stone House Farms in Hudson that measures the impact of cover crops on soil carbon, among other things.

The state Legislature is taking note, too. Didi Barrett, who represents parts of Dutchess and Columbia in the state Assembly, spearheaded the Carbon Farm Pilot Project for the Soil and Water Conversation Districts in both counties to undertake a two-year study of the impact of new approaches to soil.

Climate resilience for Hudson Valley farmers means different things for each farm. Sarah Ficken would like to further minimize their carbon footprint with solar or geothermal energy. But first, they need to solve their water dilemma. Their well ran dry early in the season and they need to be able to store water on the property. They have a lot of thirsty cows.