Something was wrong with Mira.

Her parents, Ted and Nell Timmer, had taken notice near the end of the summer. Their 7-year-old, about to enter the second grade at the Garrison School, was falling asleep at odd times, crying for no reason, having weird memory glitches and trouble finishing sentences. But it didn’t cause serious concern; it was August when it was scorching hot and everyone was a little off.

But then came the seizure.

On the Sunday before Labor Day, Mira and her father, uncle and three of her four brothers were playing basketball outside their home on Lewis Lane, opposite the school field. Mira fell silent. When Ted walked over, she was rigid, staring at the sky, gurgling, choking. This continued for several minutes. 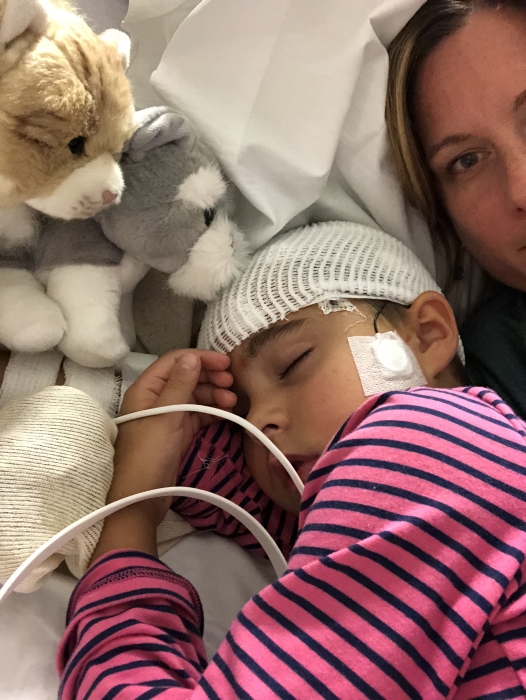 Mira Timmer receives an EEG during her treatment. There were so many procedures, says her mother, “I can’t honestly remember why they had the probe on her cheek.” (Photo provided)

They took her to Maria Ferrari Children’s Hospital in Valhalla. Her vital signs were OK. The doctor said to follow up with outpatient neurology and she went home.

There were no more seizures, but two days later, Mira was still having trouble. She confused the name of a friend and the friend’s dog. Unprovoked, she screamed at her father: “Stop looking at me! Stop looking at me!” She thrashed violently on her bed and then, suddenly, fell into a deep sleep.

“I was like, ‘OK. This is not right,’ ” recalls Nell, who is a maternity ward nurse at Westchester Medical Center. As she carried Mira to the car to return to the hospital, her daughter told her: “I can’t take it anymore. I feel like it’s pulling me into my head.”

Nell remembers thinking: Is this what people say when they have a brain tumor?

Back in Valhalla, an MRI of Mira’s brain showed no tumor. The fluid from a spinal tap was sent to the Mayo Clinic in Minnesota. In the meantime, Mira remained in the hospital. With one of her parents always in the room, she had periodic, 15-minute “episodes,” Nell says. She would scream at her mother to get away, then cry out for her when Nell backed off. She burrowed into the small spaces of the room. She repeatedly tore the sheets off the bed, and complained she couldn’t see. She colored incessantly, filling long sheets of paper. Her memory faded: she couldn’t remember her birthday, or who had visited the day before.

As they waited for the results from Mayo, a pediatric neurologist made a list on a white board in Mira’s room. No tumor. Bacterial meningitis? Tickborne disease? (Mira later tested negative for Lyme.) HaNDL syndrome? Some kind of autoimmune encephalitis, such as anti-NMDA?

The latter is a relatively uncommon disorder, first described in 2007, in which the immune system creates antibodies that attack N-methyl-D-aspartate (NMDA) receptors in the brain. This monkey wrench causes patients to lose inhibitions, act out violently and exhibit other behaviors often associated with severe mental illness. It is far more common in females and has been confirmed in children as young as 21 months.

The doctor told the Timmers he would be surprised if that was the case because Mira’s symptoms were relatively mild compared to the 10 cases he had seen over the past decade. For instance, he said, Mira wasn’t making weird movements with her mouth and tongue, a common symptom. 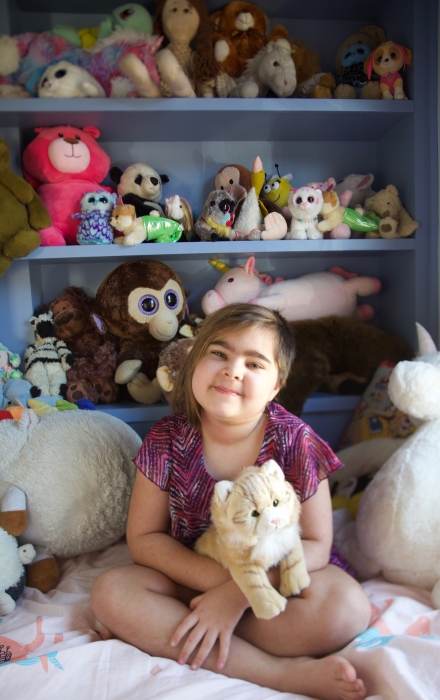 The next day, Sept. 10, Mira’s mouth became a beehive of activity.

Every other day over the next week, Mira underwent a process in which a machine at her bedside removed the blood from her body through an IV in her neck, pumped it through a centrifuge to strip the plasma (which carried the antibodies attacking her brain), and returned it to her body with donated albumin so the plasma could regenerate. That was followed by five rounds of intravenous and IV immunoglobulin (IVIG) to tamp down her overactive immune system.

While she still had some episodes, her parents say she seemed to be recovering. On Sept. 28, a Friday, she was sent home.

On Saturday morning, her mother watched her right-handed child struggle to eat her cereal with her left hand, while making random movements with her right hand, which she was holding up in the air. She had several episodes over the weekend where she showed a messy lack of inhibition, and by Monday afternoon, she raced impulsively out of the house and began running laps in the school field with the middle-school soccer team, then doing calisthenics with them. “Coach Beckley asked if he should send her back,” Ted recalls, smiling.

It was funny, in retrospect, but Mira clearly was not better.

Their doctor at Maria Ferrari was on vacation, but they were able to see a pediatric neurologist at Columbia University Medical Center, who admitted her. She was having moments of catatonia, Nell says, and randomly touching and stroking strangers, along with screeching. When they reached the hospital room, Mira slept for 36 hours.

“When she woke up, she was a lunatic,” Nell says. “That week was the worst. She was screaming, hitting, kicking, biting.”

“There was nothing in her brain telling her to stop,” Nell says. “Both of us had to be there because she would have raging fits and try to bolt. One of us had to guard the door.”

“It got to the point where I just let her run,” says Ted. “I would run the loop with her.” In one instance, he says, Mira bowled over a doctor who saw her coming and crouched to hug her. 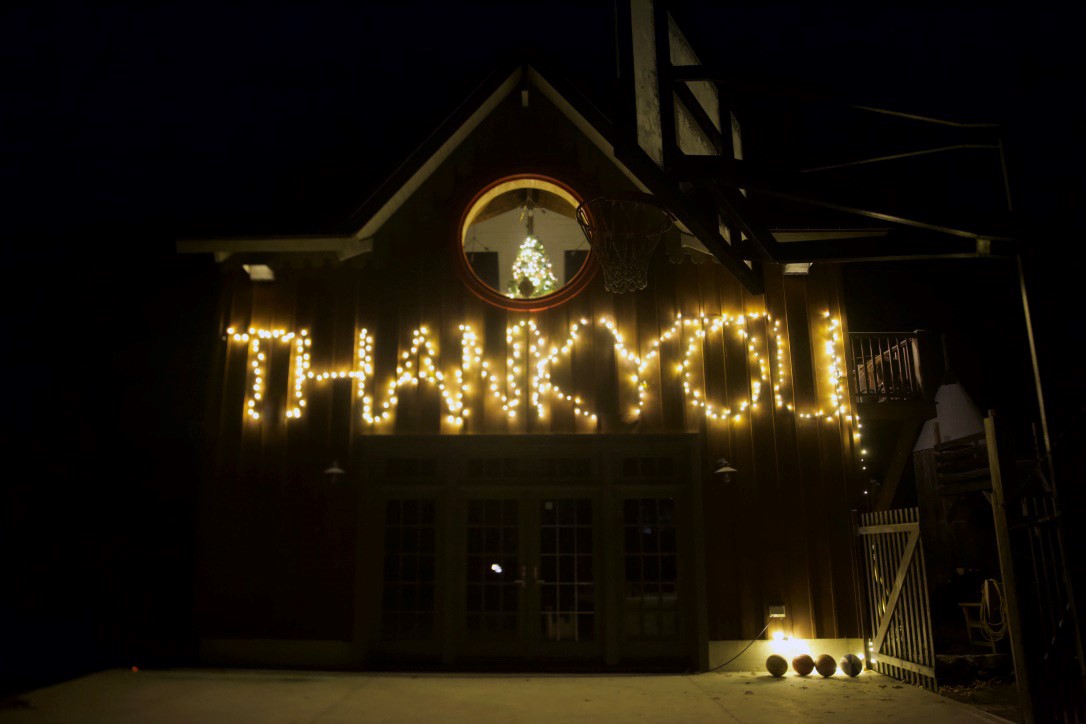 The Timmers used holiday lights to send a message back to the community for its help. (Photo by Sheila Williams)

A family friend, Kelley Amadei, launched a campaign at gofundme.com to help the Timmer family with expenses while both parents stopped working to care for Mira. As of this week, 229 contributors have donated $44,300.

“I was blown away,” says Nell. “It feels like an episode of This is Your Life. Not only my family gave, but friends from middle school and boys I went to dances with in high school, and so many people from Beacon, where we had a coffee shop for five years, and the teachers at Garrison School.”

“We’re just feeling everybody was looking out for us,” Nell said.

A neurologist at Columbia prescribed four doses of Rituxanmab, a form of chemotherapy, to wipe out the white blood cells producing the antibodies, since washing them out hadn’t worked. Mira was moved back to Maria Ferrari, closer to home, for the final three doses. On Oct. 26 she was transferred to Blythedale Children’s Hospital in Valhalla, where she remained for nearly six weeks of speech, memory and behavioral rehab.

“She still had some good tantrums” at Blythedale, says Ted. “She once kicked the heavy bathroom door for 30 minutes. I mean, karate kicks.”

In November, the Timmers received the results of a second spinal tap done in the midst of chemo that showed that the antibodies were gone.

Since returning home to Garrison on Dec. 5, Mira has been attending her second-grade class for two hours every other day, although after the first two hours she slept for four, her mother says. A steroid she was taking until recently made her constantly hungry, and she gained 30 pounds.

Nell says Mira’s brothers are glad to have their sister home and have been supportive as she recovers. “When she had a freakout, even Graham [who is 4] said, ‘I think Mira’s brain is still hurting her.’ ”