I live in Cold Spring but Beacon is where most of my social life is. Before Two-Way Brewery opened, there wasn’t a brewery in Beacon, so it was obvious there was an upside there. A strong local beer community can support dozens of breweries, even in a small town, and the people who are moving to Beacon are right in line with our typical customer. It started as a search for a retail outpost but I revisited properties earlier this year with an eye toward a satellite taproom. The property [on Fishkill Avenue] was just begging to be converted into a brewery. 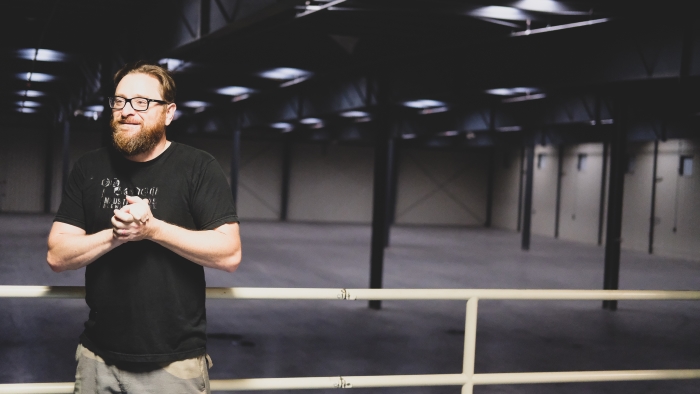 Jeff O’Neil inside the Beacon space that will be developed into a brewery, tasting room and event center (Point Five Creative)

What is a “satellite” taproom?

One of the big success stories in craft beer has been the “on-premise experience” that people seem to love. The consumer wants to know their brewer in the same way that they know their baker or their farmer. We’ve had good luck in Rockland County with having people come to see the whole process. The opportunities in Beacon are much bigger. We’ll have a big deck and patio with amazing views [of Mount Beacon], and we’ll build a much larger production facility, as well. It’ll start as an outpost where we sell beer brewed in Rockland. We’re going to do a food-truck thing and there will be an event center, too.

Why have craft breweries become so popular?

There are 7,000 breweries in the U.S., and five years ago there might have been 2,500. There’s this trend toward local stuff of all sorts, and the consumer has finally been turned on to fresh beer. Beer is a living thing and it suffers the farther it goes from its source. It dovetails nicely with the farmers market experience. That’s the best analogy I have for it. The Hudson Valley in the past few years has probably quadrupled its number of breweries, and has become a world-class place to travel and drink local beer. But even though we’re all in the same 100-mile stretch of valley, the roads don’t tie us all together well. However, with Sloop Brewing Co. settling in East Fishkill and us and Hudson Valley Brewery in Beacon, plus Newburgh Brewing Co., there’s a great belt that people can travel by mass transit or Uber. A bigger part of our vision is to make Beacon a center for craft beer.

An artist’s rendering of the proposed Beacon brewery (Image provided)

How long have you been brewing?

About 20 years. I was born in Poughkeepsie and after college went out West and started working at craft breweries. My wife and I moved back with our kids seven or eight years ago. We’re proud to be a part of a new tradition here.

A resident recently asked the City Council, seemingly out the blue, to reconsider its longstanding ban on pinball machines and “amusement centers.” Coincidence?
One of the proposed uses that would run parallel with the brewery could be an arcade and virtual-reality facility. I don’t know for sure if that was someone from our side, but we have been talking to the city about this for a number of months, and word may have gotten out. We’ve presented this to the Beacon Planning Board, so it’s no secret.