Mildred was born in Newburgh on Jan. 20, 1926, the daughter of John and Lena (Ferrara) Grippo. She moved to Beacon in 1947, where she became a parishioner of St. John – St. Joachim Church. She married Henry Grippo, who died in 1998.

Mildred is survived by her son, Garry Grippo (Kim) of Beacon; her grandchildren, Christine Grippo of Poughkeepsie and Kimberley Mason (Mark) of Hidden Lake, Florida; and her great-grandchildren, Arthur Grippo of Newburgh and Ruth Grippo of Beacon. She is the last surviving of nine children.

A Mass of Christian Burial will be offered at 10 a.m. on Friday, Jan. 4, at St. John the Evangelist Church, 31 Willow St., in Beacon, with interment to follow at St. Joachim Cemetery. Memorial donations may be made to the Hudson Valley Hospice Foundation (hvhospice.org).

Gordon was born in Beacon on March 8, 1934, the son of Robert and Mary Lamoree. He was employed as a corrections officer at Greenhaven Prison for 25 years until his retirement in 1981. He also worked at the Poughkeepsie Journal for many years.

He is survived by his wife of 42 years, Valerie Lamoree, and his children: Irene Biomead (Eric) of Levittown, Pennsylvania; Robert Lamoree of Poughkeepsie; James Lamoree (Meaghan Oberne) of Webster, Florida; Margaret Gould (Doug) of Tampa; and Richard Lamoree (Janet) of Gilbert, Arizona.

He also is survived by eight grandchildren, 11 great-grandchildren 1 great-great grandchild, and his brothers: Joseph Lamoree of Fishkill and Paul Lamoree (Linda) of Myrtle Beach, South Carolina.

Calling hours will take place from 1 to 4 p.m. on Sunday, Dec. 30 at the Timothy P. Doyle Funeral Home, 371 Hooker Ave., in Poughkeepsie. A funeral service will be held at 11 a.m. on Dec. 31 at the funeral home with burial to follow at Union Cemetery in Hyde Park. 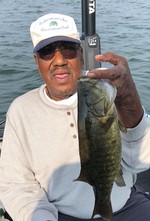 Known to his family and friends as “Cowboy,” he was born on April 10, 1940, in Moore County, North Carolina, the son of Tracy and Lessie McNair. On Oct. 18, 1960, he married Gloria Williamson in Beacon, where they raised their family.

Robert was employed by the Ford Motor Co. in Mahwah and Teterboro, New Jersey for 37 years, until his retirement.

He was an avid hunter and fisherman and was a co-founder of the Fisherman’s Net Club of Beacon. After retirement he became a full time fisherman making his own lures. His love of fishing inspired people to fish. He was a “fisherman of men.”

Besides his wife, Robert is survived by his brother, Lenny McNair of Walden, and his children: Robert McNair (Harriet); Terrence McNair (Susan); his sons Craig and Curtis McNair; his daughter Gloria McNair (Janeil) and a host of grandchildren and great-grandchildren.

A funeral service was held on Dec. 26 at Springfield Baptist Church in Beacon, followed by interment at Fishkill Rural Cemetery.

Born in Beacon on Nov. 6, 1935, he was the son of John and Anna (Schnetzler) O’Donnell. Jack served in the U.S. Air Force during the Korean Conflict until his discharge in 1957 as an airman second class. He worked as a real estate agent for many years at Prudential Serls Prime Properties. On Oct. 6, 1957, he married Carol Betterton in Beacon.

Jack was an avid outdoorsman who liked to hunt and fish and also enjoyed golfing and bowling. More than anything else, he cherished spending time with his family, especially his grandchildren and great-grandchildren.

A graveside service was held Dec. 27 at St. Joachim Cemetery in Beacon. Memorial donations may be made to St. Jude Children’s Research Hospital (stjude.org).

Marcia was born in Banes, Cuba, on March 3, 1931 the daughter of Ricardo Gorrin and Leonida de la Caridad Almira. On Nov. 7, 1960, in Cuba, she married Rolando Santovenia.

The couple came to the U.S. as refugees and settled in Beacon. Marcia worked as a librarian at the Howland Public Library until her retirement. She was a devout Catholic and was a parishioner of St. Joachim–St. John the Evangelist Church and also attended Mass at the Carmelite Monastery in Beacon. She was also a member of the Hispanic Society and Comite Mi Gente.

In addition to her husband, Marcia is survived by her sons, Rick Santovenia, Ralph Santovenia (Effie) and Rei Santovenia (Erica); her grandson Donovan Ellis; and her sister, Nilda Gorrin Almira.