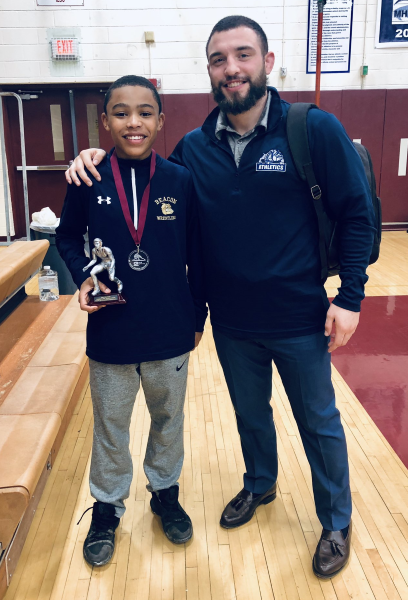 Chris Crawford, an eighth-grader at Rombout Middle School who wrestles for Beacon High School, finished second in the 99-pound weight division at the 53rd Annual Mid-Hudson wrestling invitational held on Dec. 27 and 28 at Arlington High School.

After going 5-0 in the preliminary rounds, he advanced to the finals, where he was pinned at 5:22 by Colby Amell of Saugerties High School. After the tournament, he was named Most Outstanding Freshman Wrestler (at right), despite the fact he is still in middle school.

There were 311 wrestlers at the tournament from 25 schools, and 863 matches.

In other competition, Javon Dortch, wrestling at 160 pounds, advanced after winning two of his three matches in the first rounds. He won his first finals match but lost the next two.

Dirani Haynes, after finishing 3-1 at 182 pounds in the preliminaries, lost his two matches in the finals. George Pinkhardt was 3-0 at 285 pounds and won his first match in the finals but then was injured.