Three points can make all the difference. The Haldane High School girls’ basketball team held on for a 47-46 victory over Poughkeepsie on Jan. 19 but dropped a 39-37 decision to North Salem three days later. 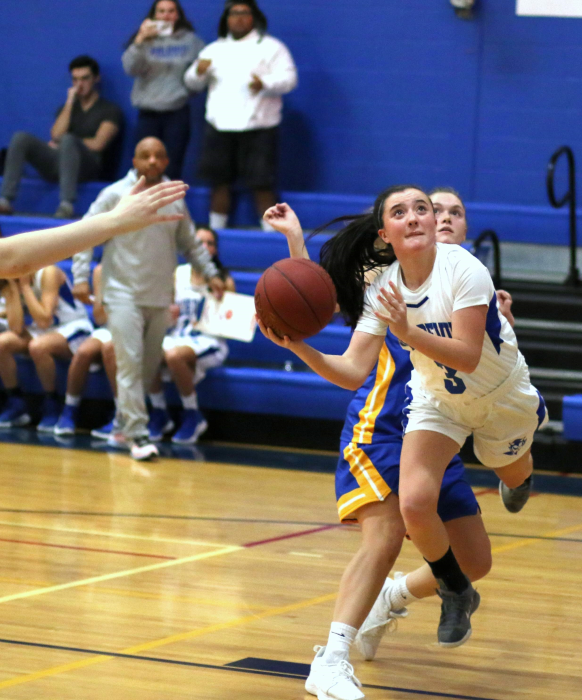 Bela Monteleone eyes the basket as she attempts a layup to tie the score in the final seconds against North Salem. (Photo by Scott Warren)

Hosting North Salem on Tuesday (Jan. 22), the Blue Devils had a strong fourth quarter, outscoring the Tigers, 10–4, but it wasn’t quite enough when Bela Monteleone missed a contested layout with five seconds left that would have sent the game to overtime and a rebound attempt by Julia Rotando was off as well.

“We came out a little slow, made some mistakes and turned the ball over,” Coach Tyrone Searight said. “We dug a hole for ourselves, but in the third quarter we changed our defense, tried some different things, and got some turnovers.”

North Salem was up by five points with 40 seconds left, when Monteleone drained a three-pointer to make it a two-point game. After a North Salem player missed two free throws at the other end, Sofia Viggiano secured the rebound and Searight called two time-outs — one to stop the clock and the second to move the ball from the endline to half court and set up a final play.

“We gutted it out and played hard,” said Searight, who threw a clipboard to the floor after the horn in frustration. “A stop [one basket] ended up being the difference, but we played a decent game, and rebounded well.”

Monteleone led the team with 19 points, and Rotando had seven. 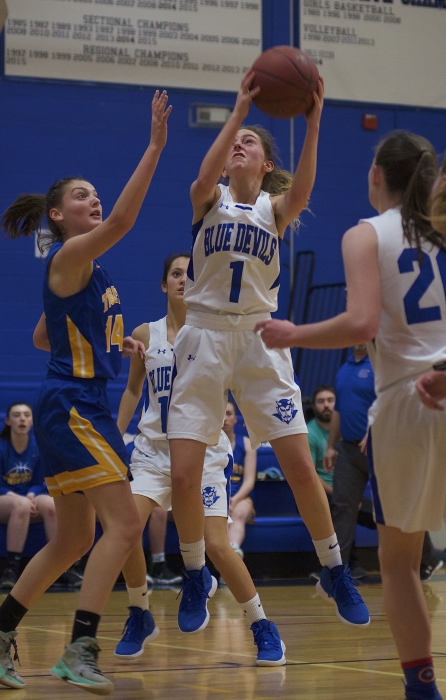 Against Poughkeepsie, the Blue Devils were up by three points when the Pioneers made a mental error and shot and made a two-point basket with two seconds left, which was not enough to tie the game.

“Poughkeepsie is a big team, but we rebounded well and shot well,” said Searight. “Olivia, Bela and Sofia all came out shooting with confidence, and Julia gave us good defense. Shianne Twoguns also had a nice steal at the end of the game.”

The split left Haldane at 4–11 on the season, but Searight believes his team is headed in the right direction.

“It feels like we’re coming together, catching our groove,” he said. “We are shooting and rebounding better, and the team continues to improve.”

Haldane was scheduled to host Putnam Valley today (Jan. 25) at 7 p.m. and will travel to North Salem on Thursday, Jan. 31, for a 6 p.m. rematch against the Tigers.