Last month a group called Elected Officials to Protect New York sent a letter to Comptroller Thomas DiNapoli urging him to divest the state’s $209 billion pension fund from energy companies that process and sell oil, gas and other fossil fuels which, when burned, release carbon into the atmosphere that contributes to global warming.

The letter has been signed by 221 officials who live in 50 of the state’s 62 counties, including four Dutchess County legislators. But in contrast to a letter sent by the group in 2012 to Andrew Cuomo urging the governor to extend a moratorium on fracking that was signed by nearly 1,000 officials from all 62 counties, no elected officials from Beacon or anywhere in Putnam County are among the signatories.

The Current contacted three officials from the Highlands who signed the 2012 fracking letter and are still in office to ask about divestment. Philipstown Supervisor Richard Shea and Beacon Mayor Randy Casale did not immediately respond. George Mansfeld, a longtime member of the Beacon City Council, said he was unaware of the divestment letter but would gladly sign on.

Last year, Elected Officials to Protect New York wrote a letter to lobby for the creation of a state Decarbonization Advisory Panel to examine the feasibility of divesting the state pension fund. (One of the panel’s members is Bevis Longstreth, a Garrison resident who also serves on the board of Highlands Current Inc.) It too had no signatories from Beacon or Putnam. 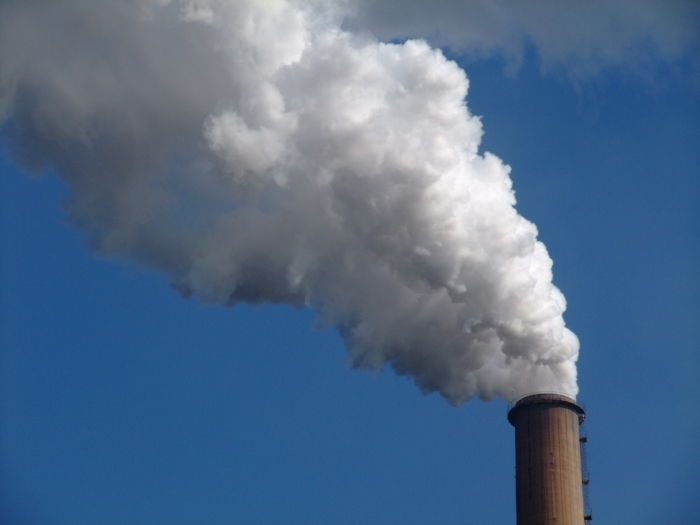 Smoke pours from the chimney of a coal power plant. (Photo by Carole Castelli)

Dominic Frongillo, a co-founder of Elected Officials to Protect New York, said the group is trying to “empower elected officials who may want to lead and take action on these issues within their own municipalities. This is a platform for us to join together and be the kind of leadership we need.”

He said the group would like to see the state fully divested from fossil fuel companies by 2020. “We’re appreciative of the governor’s leadership on this, and Comptroller DiNapoli is committed,” said Frongillo. “But you can’t negotiate with companies that are putting their business model ahead of the survival of human civilization.”

Elected Officials to Protect New York was founded in 2012 as energy companies were pushing the state to allow fracking, a process used to extract gas and oil from shale rock. Fracking seemed likely to be approved, and environmental organizations were discussing how to get the industry regulated.

At the municipal level, something else was stirring. Further upstate, in Caroline, where Frongillo was a council member, half of the registered voters signed a petition urging their elected officials to ban fracking within town limits. The two members of the council who favored fracking were defeated in the next election by a 2-1 margin.

“That had never happened before,” said Frongillo. “Usually we win elections by 50 votes or so.” After the election, the new council banned fracking.

Frongillo noticed that Caroline’s story was not unique: More than 200 other municipalities across the state had passed similar bans.

“It was the largest environmental movement of its kind in a generation in New York,” he said. “We came together as elected officials of these communities to say ‘Look, if it’s not safe in one of these municipalities, it’s not safe anywhere in our state.’ The impacts cross municipal boundaries.”

Divestment hasn’t grabbed the same attention as fracking, but the stakes may be higher. A 2013 study by scientists from Stanford, Cornell and the University of California at Davis concluded that burning fossil fuels in New York State contributes to at least 4,000 deaths and $33 billion in public health costs annually.

Frongillo said that it makes no sense for the state, which is attempting to transition to clean energy, to support fossil-fuel companies through investments in its pension fund. It also doesn’t make sense from a financial standpoint, the group says. In its letter to the comptroller, it claims that New York’s retirement fund lost more than $261 million from 2010 to 2015 on its investments in coal.

One thought on “Divestment Tougher Sell than Fracking”