Joel Schlemowitz is a filmmaker and author who, on Saturday, Feb. 23, at Boscobel in Garrison, will demonstrate an early image projector known as a magic lantern. 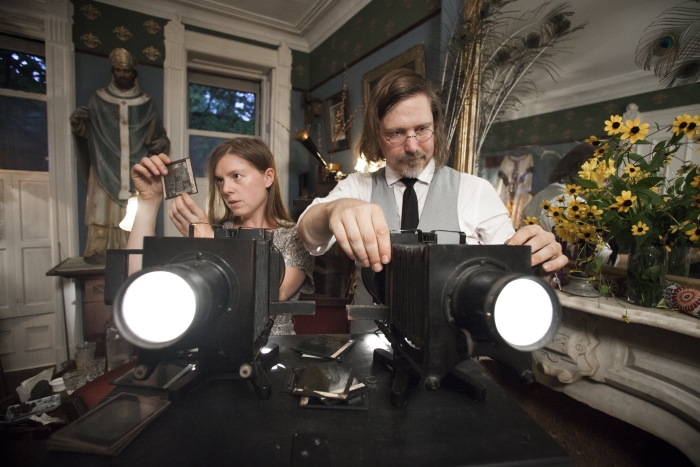 Joel Schlemowitz sets up a magic lantern while Dawn Elliott examines one of the glass slides. (Photo by Rose Callahan)

What is a magic lantern?

It illuminates glass slides. The earliest versions in the 1600s used candles as a light source, sometimes with multiple wicks. Then came oil lamps, then limelight [created by applying a gas flame to a piece of lime], which made it bright enough to use in theaters. At the same time, German toy manufacturers were creating little kerosene lamps for home use. At Boscobel I’ll be using a magic lantern from the 1930s refitted with L.E.D. lights — a combination of older equipment and new technology which is exactly in the spirit of the magic lantern. It has been adapted through time, never stuck in its own era.

In a sense it’s a precursor to cinema, although there’s not one moment in time when images started moving on screen. In the beginning, it was about having them be more dynamic than the equivalent of a modern PowerPoint. In the first half of the 18th century people were already creating diagrams for multipanel glass slides designed to produce movement.

What should the audience expect at Boscobel?

We’ll be doing a couple of different incarnations. The first, phantasmagoria, is an example of how, in the 18th century, magic lantern shows were full of spectacle, comparable to today’s haunted houses. The lantern can be moved toward and away from the screen, like a zoom lens, and the ghostly figures get larger and larger and fill the space. In the 19th century, magic lanterns started being used for scientific demonstrations such as making it appear that the planets were revolving around the stage.

Are people surprised by the magic lantern?

I think the general expectation is that it will be less impressive than it is. In Remembrance of Things Past, Proust talks about seeing magic lantern images projected in his bedroom and compares it to stained glass in a cathedral. It has such a luminescent, glowing quality. People have heard the phrase magic lantern and might understand what it is, but it’s a revelation to experience it. You’re stepping into another time — the images are a cultural window into the thoughts, preoccupations and conceits of the Victorians. It’s interesting to see what they found uproarious.

You belong to the Magic Lantern Society, which has 150 members. Is there a typical lantern enthusiast?

Lantern enthusiasts, simply by definition, are all atypical!