The federal government has designated more than 500 “opportunity zones” in New York state, including two in Beacon, where investors can receive tax breaks, especially for long-term projects.

The zones were added to the federal tax code by the Tax Cuts and Job Act in December 2017 and are designed to spur economic development and job creation in distressed communities. There are four zones in Dutchess County, including two in Poughkeepsie. Newburgh has two zones. There are none in Putnam County.

The first Beacon zone encompasses a 1.3-mile tract north of Main Street and west of and including Route 52. It has 4,700 residents, 17 percent of whom live at or below the federal poverty level, which is $25,000 annually for a family of four. The people who live in the zone earn 72 percent of the area median income. Sixteen percent are unemployed. 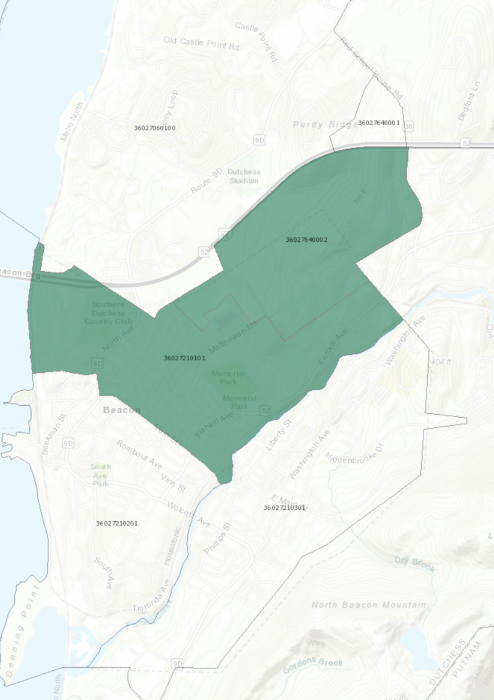 The two census tracts in Beacon that have been designated “opportunity zones” are shown in dark green.

The second zone lies directly to the north and includes a former state women’s prison that is part of an ongoing state redevelopment project. Only 116 people live in the zone, but 40 percent live in poverty.

The challenge for individuals or companies with plans in opportunity zones is finding the investors they need, said Jonathan Drapkin, the president and CEO of the Hudson Valley Pattern for Progress think tank.

That’s where the U.S. Treasury hopes to play matchmaker. Its target is investors who have profited through the sale of stocks or other assets. To defer taxes on those capital gains, an investor can sink his or her money into “qualified opportunity funds.”

“Investors who have earnings in the stock market will find that if they find the right opportunity zone investment and then leave their money there, they will achieve a much better tax outcome than if they had just paid taxes on their capital gains,” noted Drapkin.

Anyone can create an opportunity fund, the IRS says, as long as it invests in an eligible property in one of the nearly 9,000 designated zones in the U.S. and its territories.

Drapkin said that, on the Beacon tracts, Pattern for Progress would like to see proposals for mixed-use development that includes affordable housing. Mayor Randy Casale said he hopes to see jobs created that keep residents working in Beacon.

Dutchess County is expected to hold an informational session in the spring to connect projects with investors, and Pattern for Progress is hosting a Q&A with representatives from Empire State Development, the state’s principal development agency, at 10 a.m. on March 15 at the Newburgh campus of SUNY Orange.