Girls fall in regional semifinal to No. 1 Millbrook

A slow start and too many turnovers cost the Haldane High School girls’ basketball team in its most important game of the season, as the Blue Devils dropped a 60-44 decision to Section 9 champ Millbrook in a Class C regional semifinal on Tuesday (March 5) at Mount Saint Mary College in Newburgh. 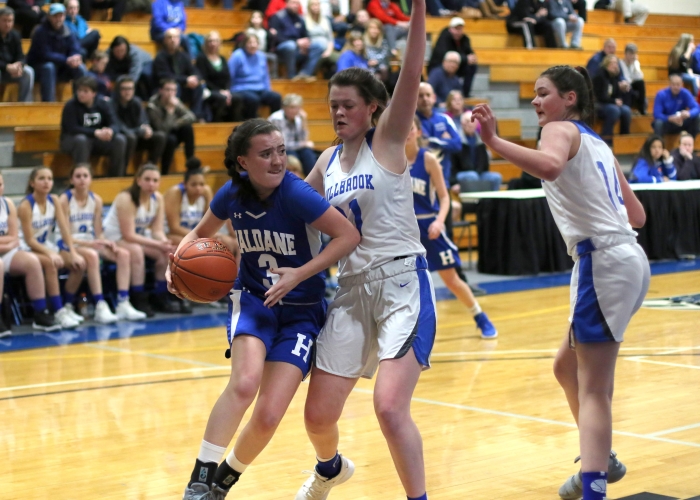 Millbrook (19-2), which is ranked No. 1 in Class C in the state by the New York State Sportswriters Association and is the defending state champion, advanced to Saturday’s Class C regional final on March 9 against a 19-4 team from Long Island made up of players from Pierson, Bridgehampton and Shelter Island that is ranked No. 9 in the state.

Haldane ended its season with a 7-16 record buoyed by its sixth straight Gold Ball as the Section 1, Class C champs. 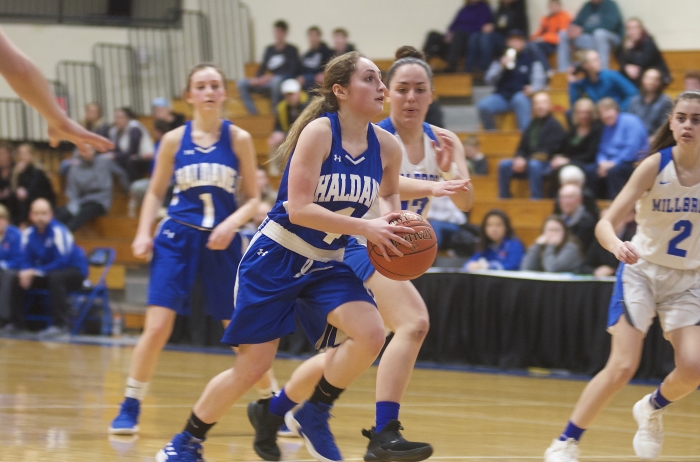 A number of the players on both teams also play soccer, and the Millbrook players were eager to avenge a 3-1 regional tournament loss in the fall to Haldane. 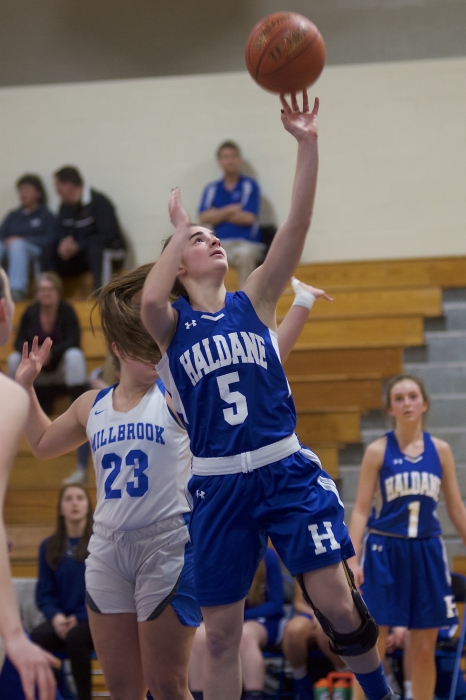 Julia Rotando, the lone senior on the Haldane team, shoots against Millbrook. (Photo by S. Pearlman)

Millbrook started the game strong and opened a 16-7 lead after one quarter. The Blazers led 28-18 by halftime, and it was a deficit the Blue Devils would be unable to erase.

“Once we got into a little bit of a hole, it was tough,” Coach Tyrone Searight said. “We had a lot of turnovers, and that was big. That allowed them to build a lead. We lost by 16, and we had at least 20 turnovers that they were able to turn them into points. If we had cut that down… I do think we played well for being undersized.”

Haldane struggled on the boards against Millbrook’s front line — most problematic was 5-11 junior Erin Fox, who scored 24 points and grabbed 15 rebounds — giving the Blazers second and third opportunities at baskets.

“We could’ve been more physical boxing out” on rebounds, Searight said. “That was a tremendous advantage for them. We didn’t limit them to one shot.”

“I’m proud of all the girls and what they accomplished,” Searight said. “We had our ups and downs this season, and they handled themselves well. They stayed focused and competed day in and day out.”