Several programs initiated by staff members are launching at the Desmond-Fish Library in Garrison this month.

“Everyone is taking ownership of programs and coming up with ideas,” says Director Jen McCreery.

For the first, the Edible Book Club, led by librarian Karen Thompson, participants each month will read a book about food and cooking. It will next meet at noon on Saturday, March 23, at Restaurant 1915 at the Bear Mountain Inn as part of Hudson Valley Restaurant Week. (Register by March 20 by calling the library at 845-424-3020.)

The organizational meeting for the group, held in February, was a potluck. “We had bread and cheese from Jane Eyre, blueberry cake from Blueberries for Sal, and Crepes of Wrath, as well as a large web made from gummy candy inspired by Charlotte’s Web,” McCreery says.

She says future selections could include books about the joys and science of cooking, perhaps a singular process such as pickling, or an ingredient such as salt.

Memoirs by chefs are also candidates. “There are great ones out there by Jacques Pepin, M.F.K. Fisher and, our first subject, Anthony Bourdain,” the author of Kitchen Confidential, McCreery says. “Another possibility is reading multiple cookbooks written by the same author and comparing recipes. You can kind of go all over the place with it.”

Librarian Beth Vardy has come up with the jigsaw puzzle swap, which began on Feb. 21. One patron, Linda Lomonaco, promptly seated herself at a table sprinkled with a few starter pieces and got to work. She sat across from a puzzle completed by visitors to the library over several months.

“We have a lot of patrons who come to the library to spend some time with other people,” says Vardy. “So why not do something together? This brings together groups who wouldn’t normally sit down together.” 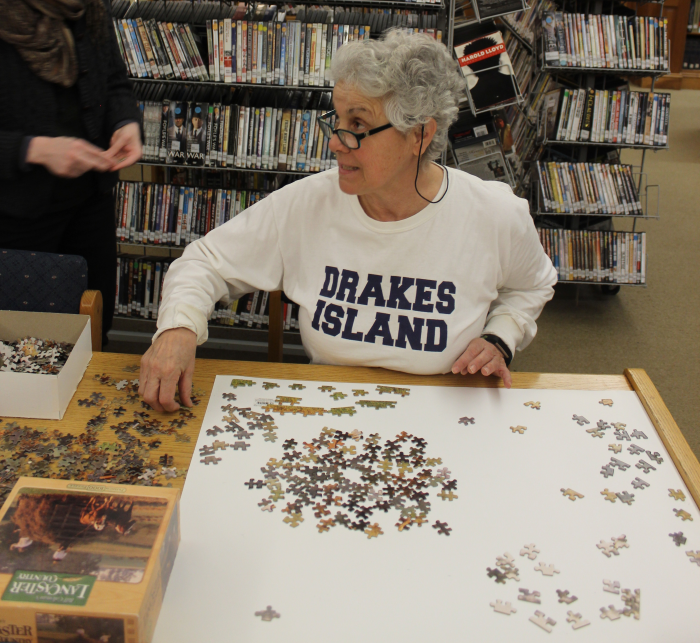 Linda Lomonaco digs into the latest community puzzle. (Photo by A. Rooney)

The subjects of the puzzles at the first gathering included Lancaster County, Pennsylvania (which seems to be inhabited solely by horses!), a rail station, attic treasures, Germany’s Neuschwanstein Castle and, slightly off-season, Santa’s sleigh.

Said Lomonaco: “I’m here at the library a lot, but this has made me come here even more!”

Vardy is also launching a program called Folded, for adults in their 20s, 30s and 40s focused on paper crafts such as origami and making boxes out of discarded books. It will meet on March 20 and the third Tuesday of every subsequent month.