Joan Phares talks to pieces of wood. And to locks, twigs and porcelain dolls. Or, more precisely, she listens to them.

“I save scraps, well-handled objects — things which speak to me,” she explains, and from them she creates visual compositions that invite viewers to compose their own stories. “They can make it into whatever they feel it is.” 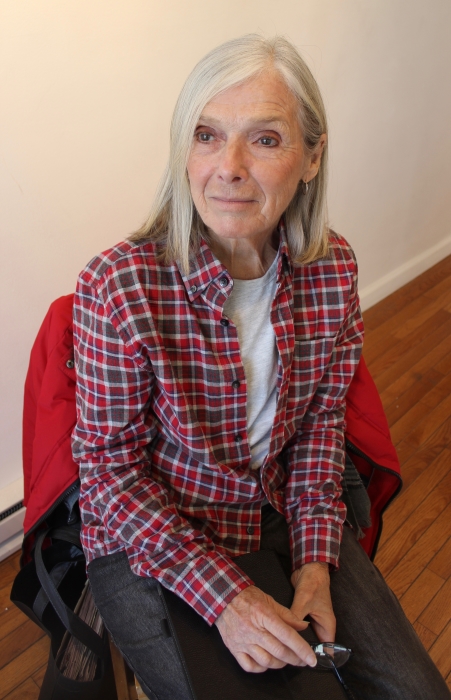 Joan Phares (Photo by A. Rooney)

Phares uses her assemblage skills in many disciplines, including painting, drawing and clay. A collection of her work is on exhibit through April 7 at the gallery of the Beacon Artist Union (BAU), of which she is a member.

A native of Ohio, Phares says she was discouraged as a young woman from majoring in art so instead earned a degree in home economics, “which was practical.” But after she married and moved to New York, she studied at the National Academy School and at the Art Students’ League and later earned a master’s degree in studio art from the College of New Rochelle. She taught for years at a public school in Scarsdale and, after retiring, moved to Bedford.

That’s where she began assembling.

“We have a barn on our property,” she says. “Every time I dug a hole in the ground, some object would pop up that someone had buried. I pulled out an inner tube from a tractor, a pair of coveralls, abandoned logs and barn wood. I found a pile of abandoned wood, faded from the sun, and it spoke to me.”

Earlier in her art career, Phares worked with clay and paint. “When I would paint I’d have a message and would figure out how to visually interpret it,” she says. “It required meticulous planning. Now, I collect a number of things: found wood, things picked up from thrift shops, objects I notice out of the corner of my eye. Then I pick something — a rusty nail, an old box — that feels right, and I start fooling around with it. I try to work minimally, adding objects.”

Phares says she deliberately pairs objects and images you would not expect to see together. “It takes a long time, but that’s how things happen,” she says. “It’s holding the objects, feeling them, thinking about them. Yet it’s also calculated in terms of composition and color. It’s also about feelings. The materials and their interactions dictate the outcome of each piece. My role is that of the respectful fabricator.”

With retirement, Phares says she finally has time to promote her art. “I went from 135 kids a day and my own two kids, from there to zero in a short amount of time,” she says. “This is a nice way to open up a new life. As a high school art teacher, you’re a jack of all trades, master of none. I’ve always done a little bit of everything, and now my work combines many of these things.

“It’s mainly about finding a quiet space in your brain,” she says. “When I retired I took my watch off for six months. Then I realized how much time I was wasting. It’s wonderful to have a creative energy. I’m enjoying this age! I get to do what I want to do!”