The 6-foot All-American, who is a junior at Louisiana State University, came from behind to win the title with a jump of 26 feet and 1.75 inches on the fifth of his six leaps. 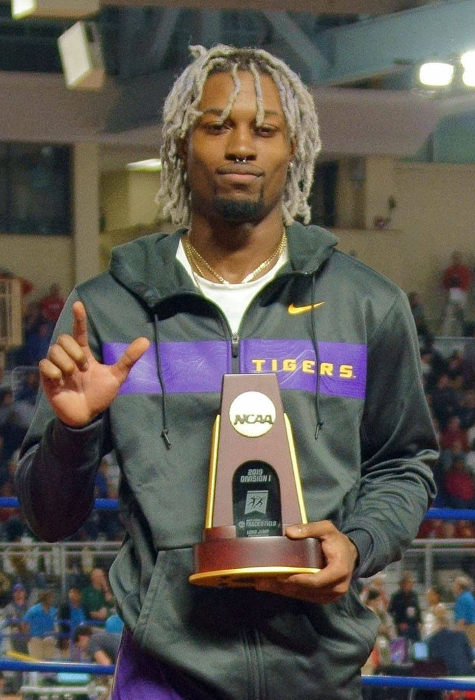 “I’m really proud of Rayvon and Mondo [Duplantis, who won the pole vault title for LSU],” Coach Dennis Shaver told reporters. “They came out and did what they had to do to score points for our team, and in a big way.”

After leading the two-day competition on the first day behind its two champions,  Grey and Duplantis, the LSU men finished third, after Florida and Houston.

Grey opened with a jump of 25-8, enough to carry him through three preliminary rounds. He was in sixth place entering the finals but on his fifth jump flew a quarter inch farther than the leader, Trumaine Jefferson of Houston. Grey became the Tigers’ first indoor national long jump champion since 2004, and its second overall.

“Coming into this meet, I didn’t care how far I went, I just wanted to get the win,” Grey told reporters. “The key to succeeding in a meet like this is staying focused.”

During his senior year at Beacon High School, Grey jumped 26 feet and a quarter inch, a state record and the best indoor leap in the nation in 27 years by a high school athlete, according to the National Scholastic Athletics Foundation. Grey also broke the state outdoor long jump record, which had stood for 51 years.

Grey told The Current in 2016 that he almost quit track as a Beacon freshman because he doubted his abilities. “At first I didn’t like it at all,” Grey said. “Who wants to run all the time? I thought it was boring.”

Beacon Coach Jim Henry said in 2016 that his star had “the single-best attitude you can ask for in an athlete. After each performance, he wants to know two things: ‘How was that?’ and ‘What can I improve for the next time?’ He wanted to know this when he was brand new to jumping and he still wants to know this as the best jumper in the country.”