The Beacon City Council could add its support on Monday (April 1) to a campaign that’s gaining momentum in the region to stabilize the rents residents pay in New York State. 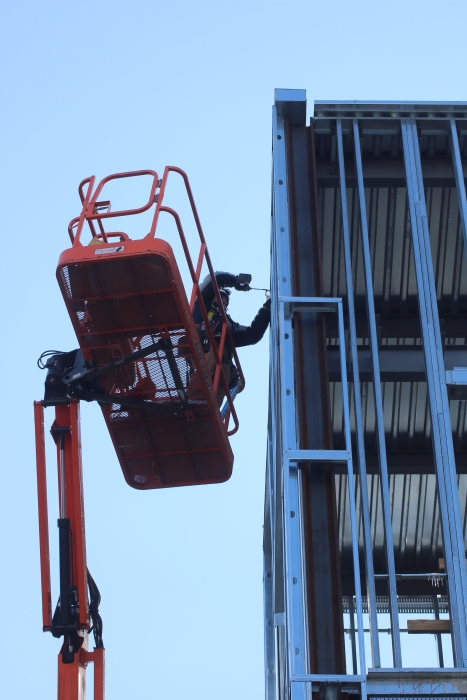 Work continues on a residential building under construction at South Elm and Main Street in Beacon. (Photo by Michael Turton)

Newburgh and New Paltz in the last month have adopted resolutions encouraging state officials to renew the expiring Emergency Tenant Protection Act (ETPA), which limits residential rents in New York City and Westchester, Rockland and Nassau counties, and to expand the legislation statewide.

Adopted in 1974, the ETPA caps annual rent increases to a percentage determined by a local board. However, the ETPA is not automatic; each municipality must vote to adopt it.

Two years ago, state legislators also proposed a number of modifications to the ETPA, including controls on residential rent increases when leases are being renewed and preventing landlords from removing apartments from rent regulation if tenants move out.

With the clock ticking on the original legislation, which expires this year, Beacon City Attorney Nick Ward-Willis said that municipalities are asking the state “to expand the scope both geographically as well as substantively.”

The resolution adopted in New Paltz calls on state leaders to “strike the geographic restrictions from the ETPA” and allow municipalities to “take an active role addressing the cost of rental housing.”

“I’ve had a few constituents who have had problems with landlords, and I get a lot of complaints about poor conditions in housing,” he said. “A few people told me their rents have doubled.”

Although a resolution wouldn’t create any new regulations in Beacon, it’s a show of support for residents, Nelson said, and may encourage state leaders to act. “Our people are not disposable. People want to live here and they want to work here.”

Affordability could return to the City Council’s agenda later this year because several members have said they would like to revisit an earlier discussion of the city’s affordable housing regulations, last revised in 2017. The revision expanded the city’s below-market rate housing stock but “grandfathered” developments that had already been approved by the Planning Board and are now being occupied.

The Newburgh and New Paltz resolutions address only residential rents, but Beacon City Council Member Terry Nelson says he’s heard of similar increases forcing Main Street merchants from their shops. He would like to include language in any resolution asking for action on commercial rents, as well.

Katy Hope opened Beetle and Fred, a sewing supply store, at 171 Main in 2016. She said this week that she was fortunate to find an affordable space, but she, too, hears of other business owners whose rents are unsustainable.

“You definitely see rents and think: How can anybody possibly work that into their numbers, especially with the offseason here in the winter?” Hope said. Commercial rent in Beacon is cheaper than in New York City, she said, but businesses here see far fewer customers. “It’s a long, slow winter week.”

Current data on rents in Beacon is hard to come by. While a 2018 report by Hudson Valley Pattern for Progress, a nonprofit that monitors housing costs, found that 50 percent of the city’s apartments could be considered “affordable” (meaning the tenant paid less than 30 percent of his or her monthly income for rent), its numbers are based on 2017 statistics.

During the City Council’s March 25 meeting, Beacon Mayor Randy Casale questioned whether regulating rentals would be fair to property owners.

“People can sell their house and make 300 percent but we’re going to tell landlords they can only make so much money? I don’t get it,” he said. Although Airbnb and other short-term rentals are not legal in Beacon, Casale said a property owner could make much more in that market than operating a traditional (and possibly regulated) rental.

“You’re just playing right into the game,” he said.

Council Member Lee Kyriacou said he wasn’t sure if ETPA-type legislation should be implemented statewide. It could be expanded to Dutchess and other counties in the immediate metropolitan area, he said, but “I don’t think it’s Buffalo” that’s driving the issue.