Cold Spring held its annual election, and 402 voters turned out. There were eight candidates for trustee, six for assessor, two for collector, two for treasurer, two for clerk, four for street commissioner, four for fire warden and two for poundmaster. However, one elected trustee, Samuel Burrows, refused to serve, saying he had been nominated without consent, so the village board had only four members.

The editor of the Putnam County Recorder marked its fourth year of existence by noting that “the difficulty of doing right, as a journalist, will be readily seen, if we reflect [on] how few there are who agree upon the course which is right.”

Edward Hein, the proprietor of the Fountain Head House, corrected a report that John Powers had been robbed of his watch at the establishment. He said that the watch had been found the next day in the wagon that Powers and his friends took home.

A destitute German woman and her toddler got off the train at Cold Spring in search of a relative or friend who had worked several years earlier at the Nelsonville brewery. She was taken in by a resident for a few days and given new clothes and a train ticket to Buffalo.

After shooting and wounding an eagle on Constitution Island, David Robinson gave the bird to Mr. Batterfass to kill and stuff.

Charlotte Purdy of Cold Spring charged Carpenter Aickley of Peekskill, whom she married the previous fall, with bigamy. In Cold Spring court, Aickley was confronted by three women “who did not appear to be so angry with him as they did with each other,” the Recorder noted. One testified she and Aickley had been married for 12 years and had five children.

A disheveled woman who apparently spent a night in the mountains was brought by ferry to Cold Spring by William Rose, who lives opposite the village. The woman said she had escaped from a Newburgh workhouse and was climbing the rocks to reach her friends in Peekskill.

James Smith arrived with a train car-load of western horses from Kansas that received considerable attention as they were led up Main Street.

The keeper of the West Point lighthouse was removed from duty after a report that he had led a political parade while in uniform.

Dr. Longnecker, the village dentist, announced he had added to his instruments a Weber-Perry Cord Engine and a Buckingham Engine Mallet.

The state approved an application by the Cold Spring Fish and Game Association for 20,000 trout fry to be placed in Philipstown streams.

Thomas Coe hosted a “pillow-case-and-sheet” party in which the men and women retreated to separate rooms, were encased in the bedding and a mask, and proceeded to the parlor for a series of marches accompanied by piano. 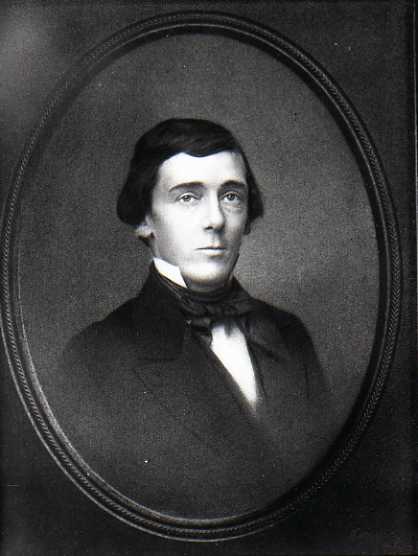 The body of William H. Osborn, 74, was brought from New York City to Garrison for burial at St. Philip’s Church. Osborn was a retired railroad executive and noted philanthropist, particularly for the New York Society for the Relief of the Ruptured and Crippled. He owned a large home in Garrison.

The Haldane Debating Club considered the questions: “Resolved, that idleness should be forbidden by law, and work be provided by the State for all those who cannot find employment for themselves” and “Resolved, that Canada will in time become an independent nation like the United States.”

Francis Butterfass reported a locket containing pictures of himself, his wife, mother-in-law and child was taken from his coat pocket as he slept in his barber chair. (It was found four days later on the floor in a corner.)

The Presbyterian Church held a “pie sociable” in which each guest was given two random pieces and tried to write out the recipes.

James Parker, a former resident of Cold Spring, was in town as a traveling salesman for the Keebler-Weyl Baking Co., which makes cakes and crackers.

It was reported that as many as 50 garter and adder snakes, measuring 10 inches to 2 feet, were killed within two days at the north end of Constitution Island.

A man attempted to give a baby to the village overseer of the poor, William King, who refused, saying he was a bachelor and knew nothing about babies. He suggested the man take the infant to the Garrison poormaster. 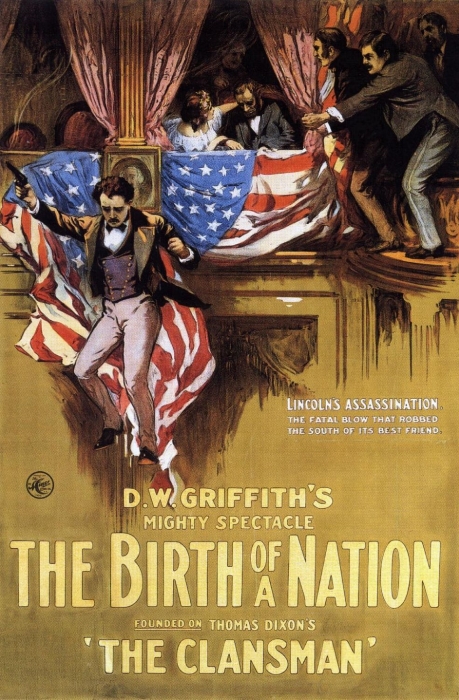 In 1919, a Peekskill theater showed D.W. Griffith’s film daily on a loop.

The state attorney general sent a representative to a Cold Spring Village Board meeting to investigate why the provisions in Julia Butterfield’s will to build a hospital and a library had not yet been fulfilled.

The state noted that in Putnam County, one of every 11 people owned a car. There also were six auto dealers, 45 motorcycles and 288 men employed as chauffeurs.

The Colonial Theatre in Peekskill advertised a Birth of a Nation promotion in which D.W. Griffith’s blockbuster, adapted from a novel called The Clansmen and released four years earlier, was screened continuously daily from 1:15 p.m. to 11 p.m.

In a basketball fundraiser in Haldane’s gym to benefit the American Red Cross and the Philipstown Milk Fund, the Junior CYO team defeated St. Patrick’s Senior CYO of Newburgh, 36-27, and the St. Joachim Cardinals of Beacon edged the St. Patrick’s Junior CYO. The event raised $150 [about $2,200].

Sgt. Fred Brewer of Beacon, whose sister lived on Cherry Street in Cold Spring, was killed in action on March 13 during a bombing raid over Germany.

WBNR in Beacon raised $12,000 [$85,000] during a radiothon for Mary Ann Cox Daniels, 22, a parishioner at Our Lady of Loretto who needed a kidney transplant.

Dr. Joseph Pittelli, a Cold Spring pediatrician, spoke to members of the Butterfield Hospital Auxiliary about raising children. He noted that doctors had discovered that amphetamines were effective in treating hyperactivity.

The newly formed United Taxpayers Association, with about 40 members, held its first meeting at the Plaza Restaurant in Cold Spring. “We better wise up or be wiped out, tax-wise,” the group announced.

John Zuvic, Haldane’s all-time leading basketball scorer, was named the sectional player of the year. “John is the best player ever to come out of the school,” said Coach John Rath.

The First Presbyterian Church of Philipstown dedicated its new Allen organ, built in Macungie, Pennsylvania. The choir sang, in German, the Mass in F by Schubert.

David Boulanger of Nelsonville, a member of a Marines mortar crew, received a Purple Heart after being injured in Vietnam.

James Corless, the rural mail carrier, had a close call during his rounds when the driveshaft of his 1969 station wagon dropped out on Lake Surprise Road. A nut was missing on a bolt that held up the rear end.

A model of a proposed Cold Spring Lions Recreational Park and Swimming Pool was placed in the showcase of Sam Sunday’s barber shop for public inspection.

A panel of six Haldane seniors shared their views at a PTA gathering on the issues of the day. They were asked for their opinions on student activists, the “black revolt” and the high school’s new dress code.

Beacon Pop Warner Football announced that the Philipstown Packers would join its league. 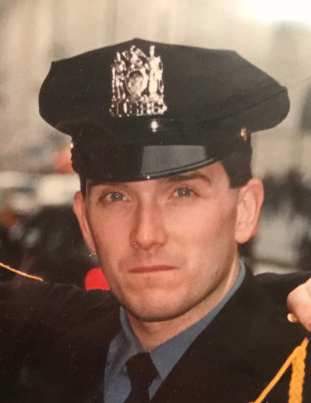 Sean McDonald, 26, a New York City police officer who had moved to Cold Spring with his wife and three young children the year before, was shot and killed on March 15 while attempting to arrest two robbery suspects in the Bronx. Both suspects were caught within 48 hours, convicted of murder and sentenced to 25 years to life. His killers became eligible for release this month and will have their next parole hearings in 2020.

The Putnam County Legislature agreed to solicit bids to re-assess all properties in Philipstown. One issue on the table was the disparity in school taxes between the Haldane and Garrison districts.

U.S. Sen. Alfonse D’Amato announced that he would not seek the Republican nomination for governor, instead endorsing state Sen. George Pataki, a resident of Garrison. At the same time, U.S. Rep. Hamilton Fish announced he would not run for a 14th term because he was battling prostate cancer.

Brian Kenny, the tax assessor for Philipstown, expressed concern that the 3,000 acres acquired by the Open Space Institute, including the Malcolm Gordon School, would mean the loss of $420,000 in revenue if the land all became tax exempt.

Three people — a couple from Peekskill and a man from Ossining — were charged with distributing crack cocaine in Cold Spring.

More than 70 volunteer firefighters battled a blaze at a boys’ dormitory at St. Basil’s Academy in Garrison started by an unattended candle while the boys were at a prayer service.

The Haldane girls’ basketball team reached the Final Four of the state Class C tournament but lost to the eventual champion, St. Johnsville, 64-58. Before facing Haldane, the Saints had won 52 straight games by an average margin of nearly 50 points. The Blue Devils were led by Jen Moran, who ended her five-year Haldane basketball career with 1,776 career points, three Final Four appearances and a team record of 97-15. 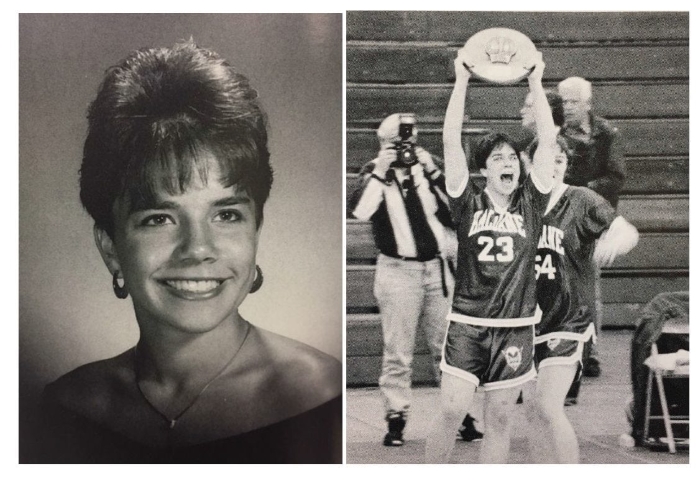 Jen Moran as a Haldane senior in 1994