The Haldane High School baseball team opened its 2019 campaign on Monday (March 25) on the road, and the results were good — the Blue Devils offense flexed its muscles in a 14-4 victory over Alexander Hamilton.

Sophomore right-hander Dan Santos picked up the victory in relief of starter Alden Dobosz. Senior third baseman and captain Adam Hotaling provided three RBI, going 3-for-5, with a double. Sophomore first baseman Vincenzo Scanga also drove in three runs, going 3-for-5, and Dobosz, a senior shortstop and another captain, went 4-for-5 and drove in a run.

“We were a little better offensively than I expected,” said Manager Simon Dudar, who took over this year when Tom Virgadamo stepped down after 10 seasons. “We had 14 hits, but we also had 16 strikeouts, which is way too many. We played errorless ball until the sixth inning, and our pitchers only allowed one earned run.” 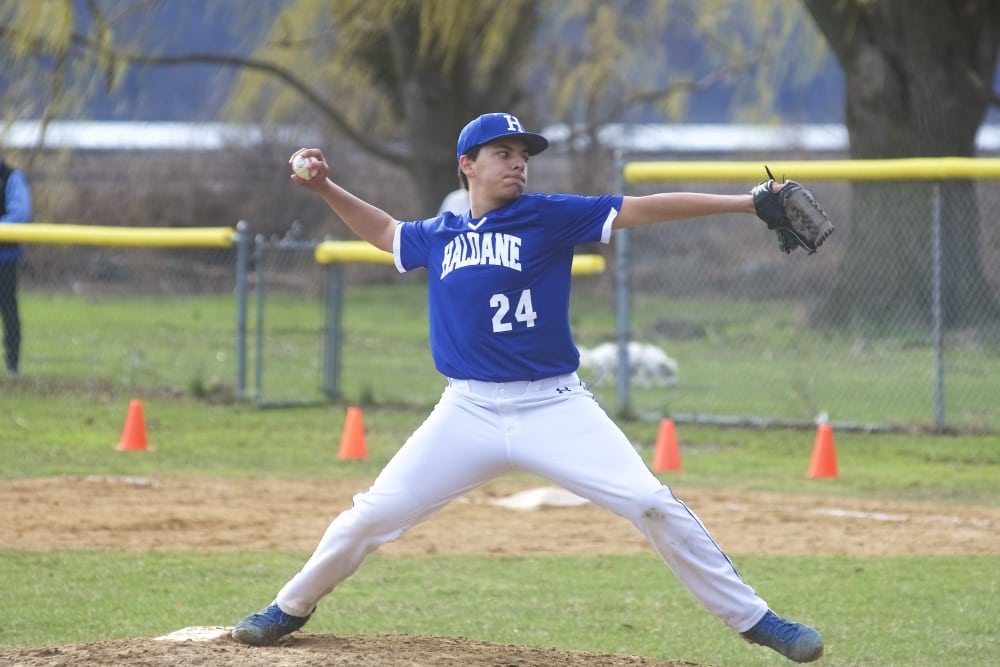 Dan Santos returns to the mound this season for the Blue Devils. (File photo by S. Pearlman)

Haldane returns a strong nucleus from last year’s 10-10 team, which lost in the Section 1, Class C semifinals. It will miss four-year starters Dan Rotondo and Aiden Siegel, gone to graduation, but returns six starters, including five seniors who are four-year veterans of the varsity.

“We’ll look to improve on last year’s success,” said Dudar. “We’ll continue doing things as we have been doing them. I’m excited about the opportunity to move into this position, and I’m looking forward to playing for a championship with these guys. I know the guys and they know me, so it’s easy for them to make the transition.”

Dobosz, Santos and Hotaling will be the top pitchers, with Mikalsen and freshman righthander Robert Viggiano available for spot starts.

“We have three solid pitchers, and a solid defense,” Dudar said. “We’re hoping that will carry us through games.”

Santos, Siegel, Hotaling and Dobosz will fill the top four spots in the lineup, and Dudar is hoping for lots of excitement.

“Adam is our big popper,” he said of Hotaling. “We like to get the table set for him. The rest of the guys are trying to get on and get over. We want to get a couple of runs across and slam the door shut” with pitching and defense.

The Blue Devils are scheduled to play Tuckahoe at Dutchess Stadium at 4 p.m. on Wednesday, April 3, before traveling to Hastings on April 4.