Steve Lambert, a conceptual artist who lives in Beacon, is cofounder of the Center for Artistic Activism and the creator of SelfControl, a Mac program that blocks access to the internet with a timer, and Add-Art, a Firefox browser add-on that replaces ads with artwork. 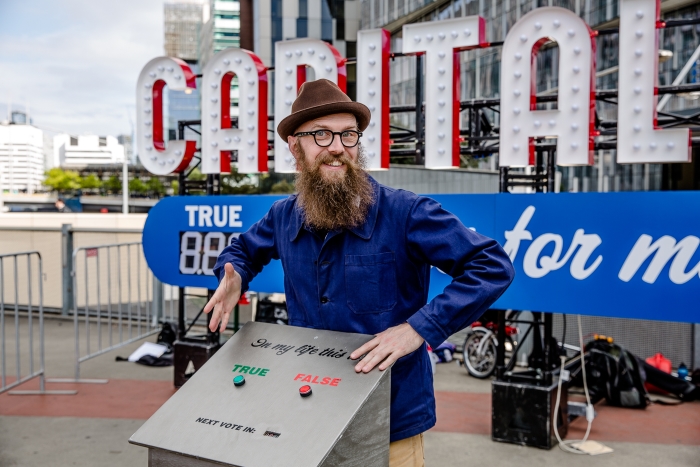 Steve Lambert with his piece, Capitalism Works for Me! True/False. (Photo provided)

You combine art with activism. Why is that?
If you look back at whatever you consider successful activism, it has elements of performance, visuals, creativity and story. Combining these things helps people better understand issues and enlivens their engagement, so it’s not as draining. Uncreative activism can seem like a slog.

Why did you create the Center for Artistic Activism?
I was making art about issues, but I was skeptical that it was doing anything. I started looking at how politics works, and how change actually happens, and how to be better at having an impact. I also was working with Stephen Duncombe, who was wondering the same thing about his activism. It came out of our doubts.

Has the political climate made people more receptive?
We used to have to make this argument that politics isn’t rational, that facts and reason aren’t the only things people take into account when making political decisions. We don’t have to do that anymore.

Are the online tools you created a form of artistic activism?
All artistic activism exists on a spectrum between being effective, like SelfControl, which helps you get stuff done — and affective, like Add-Art, which moves you and helps you understand things on a gut level. There’s plenty of research papers about how being online and advertising affect people, and you could read those, but experiencing it for yourself is different.

You lived in San Francisco during the dot-com boom years and say your art was informed by its rapid gentrification. Do you see that in Beacon?
In San Francisco, development became about cash grabs. There was a building on my block that was clearly designed by the contractor who built it, who thought: If we just get this thing up, we can make lots of money. It’s not a conscious planning process — it’s people trying to make as much money as they can in the shortest possible time. I haven’t quite seen that here in Beacon, although I’ve seen signs that it might be happening. In San Francisco, you have all this water, which limits the amount of space you can build on. Here, although the buildings going up may not be to my taste, they ease the pressure on existing housing. We’re far enough away from New York City that I hope it all balances out, but I’m on guard.