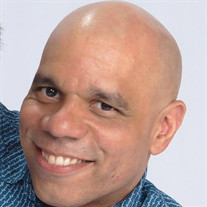 Alex was born Jan. 15, 1969, in the Bronx, the son of Kermitt Jr. and Sarah Mae (Cummings) Bowen. For most of his childhood in Valley Stream, he was raised by his mother and his stepfather, Albert Hudson, whom he called “Pop.”

Alex attended the Elmont school district. He worked for the New York City Transit Authority beginning in 1993 and spent the first nine years of his career as a train conductor and the next 16 years as a train operator until his retirement in 2018. During his tenure, Alex volunteered as a steward for the TWU Local 100 union.

Alex always had a passion and knack for vehicles. He was a Rider Coach for the Motorcycle Safety Foundation and had a commercial driver license with almost every possible endorsement including Hazardous Materials, Tow Truck, Double/Triple Tracker Trailers. On the side, he would also occasionally drive his friend’s limousine and once had the singer Grace Jones as a passenger.

His passions included spending time with this family, exploring the city, state and country in which we live in by taking many road trips by motorcycle, vehicles and recreational vehicle. One of his dreams was to travel cross-country in an RV with his family, and in the summer of 2018 he did that, from Maine to the Finger Lakes and then to Atlanta.

He loved the great outdoors and being in nature, which led him and Candice to purchase a home in Beacon in 2009. He took advantage of the outdoors — hiking, biking, kayaking, fishing, swimming, boating and camping. Some of his other hobbies included enjoying good food, listening to music, dancing, playing chess, watching sports, especially football and rooting for his favorite team, the Baltimore Ravens.

Although he grew up in the church, Alex was not baptized until finding a home church at Grace Community in Orange County. Shortly after he was baptized, he became ill and learned he had a tumor in his cervical spine, a type of brain cancer known as astrocytoma. The family decided to return to New York City in 2017 to be closer to family, doctors and the hospital.

Besides his wife and mother, Alex is survived by his three children from his first marriage, Catrina, Beverly and Alex Jr., and his son with Candice, Elijah. He also is survived by his siblings, Kermitt Bowen III and Tasha Newsome.

Memorial donations may be made to Gilda’s Club NYC (gildasclubnyc.org).