Fall behind early to Tuckahoe

After more than a week off since their season opener, the Haldane High School baseball team couldn’t find its rhythm on Wednesday (April 3) and was drummed by rival Tuckahoe, 23-1, at Dutchess Stadium.

Devin Siegel drove in Haldane’s only run with an RBI triple, allowing Adam Hotaling to score. Dan Santos took the loss on the mound for the Blue Devils, who are 1-1. Alden Dobosz pitched in relief. 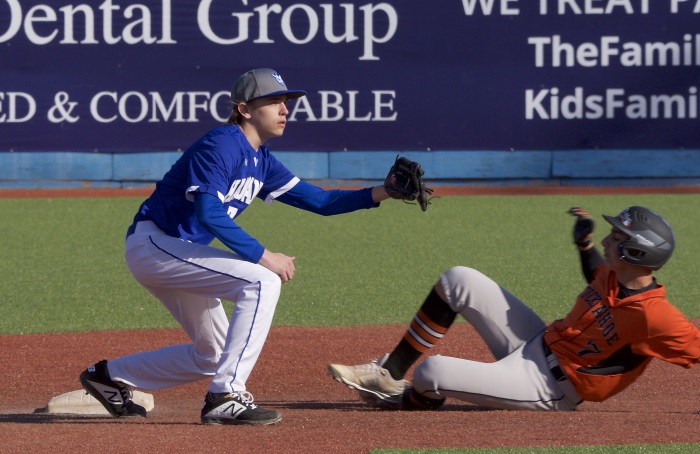 Matt Mikalsen waits for the throw at second base. (Photo by S. Pearlman)

“I thought Santos did a decent job pitching in his two innings,” Manager Simon Dudar said. “But his pitch count was up, and errors hurt us.”

Tuckahoe (1-0) put up two runs in the first inning and tacked on five more in the second to pull away.

“This isn’t indicative of our team,” Dudar said, saying the week off may have made it “tough to get back into it.”

The Blue Devils are scheduled to host Rye Neck on Saturday, April 6, at 11 a.m.