Even then, Indian Brook Falls was the place to be

Two years after he arrived in the U.S. from England, an 18-year-old artist and architect named Thomas Wharton designed the Chapel of Our Lady overlooking the Hudson River in Cold Spring, now known as Chapel Restoration. 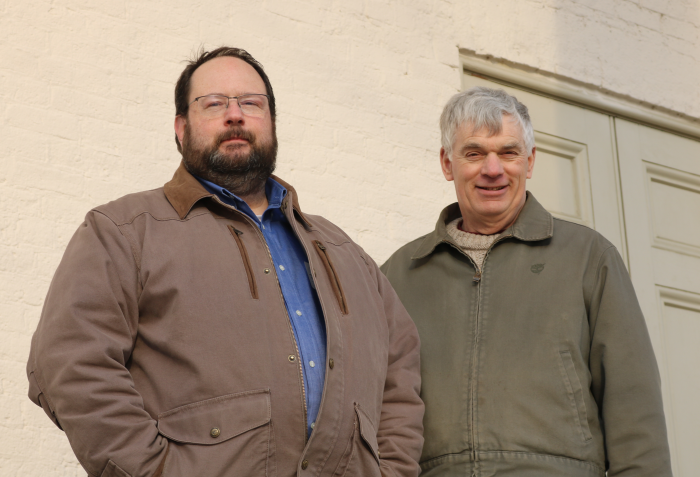 Steven Walton and Michael Armstrong at the Chapel (Photo by M. Turton)

How did the book come about?

Armstrong: In 2012, I discovered Wharton’s handwritten diary in the New York Public Library and transcribed it. It’s a fantastic story. People will find it fascinating to see this area through the eyes of an astute observer in the early 1800s. Wharton’s drawings are very photographic. He was obsessed with accuracy. His depictions of Cold Spring from the other side of the river, before the camera, were the only accurate views of the village at that time. He would not have taken liberties to make things look pretty. 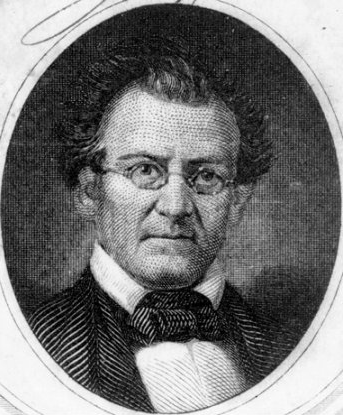 It’s hard to believe he was only 18 when he designed the chapel.

Walton: His age is important in terms of the chapel. But as an architect and artist, his career was non-linear. He brushed up against a number of communities — architecture, the Hudson River art school and Episcopal education schools — yet he never fully engaged in any one of them. We don’t know why.
A: It’s also about the way people reacted to him. He was English. I think people thought of him as the new Thomas Cole, who everyone remembered had become a prominent artist a few years before.

How did he come to design the chapel?

W: Gouverneur Kemble, the founder of the West Point Foundry, decided to build a chapel for his Catholic workers. Wharton showed up at the right time and I think Kemble saw his talent. He was a good artist, somewhat trained as an architect. Kemble had a basic design and Wharton turned it into building plans.
A: Kemble was a patron of the arts. There was an effort to get Wharton settled, find him a way of making a living. The chapel commission gave him credibility.

How did his art factor in?
W: Just as Wharton arrived, the popular press, including George Morris’ New York Mirror, was starting to print engravings. People would buy The Mirror and get a separate, unbound printed page to frame. Art was coming to the masses. Wharton was on the cutting edge of that.
A: It was how artists like Wharton could survive — teach art, make engravings, sell images to newspapers, a new way of making money as an artist.

Where did Wharton live?
A: The West Point superintendent, Sylvanus Thayer, housed Wharton on base and gave him a private, four-month course in geometry.

Does the diary have any local surprises?
A: The big surprise was his interaction with Dr. David Hosack, who established what later became the Vanderbilt estate. Hosack was an important botanist; he started a botanical garden at present-day Rockefeller Center. Wharton’s drawings from the estate are at the Metropolitan Museum of Art.
W: They also revealed new information such as his visit to the Ulster Iron Works in Saugerties. Wharton was an architect but he had an eye for engineering. He paid attention to the machinery and was astounded by the size of the forge hammer and water wheel that had been made at the West Point Foundry.

What did he say about the social life of the era?
A: He described elaborate dinner parties at Kemble’s with Thayer and close friends. They’d start at 3 p.m., a peculiar time for meals that stretched into the evening. Washington Irving and other prominent people participated. 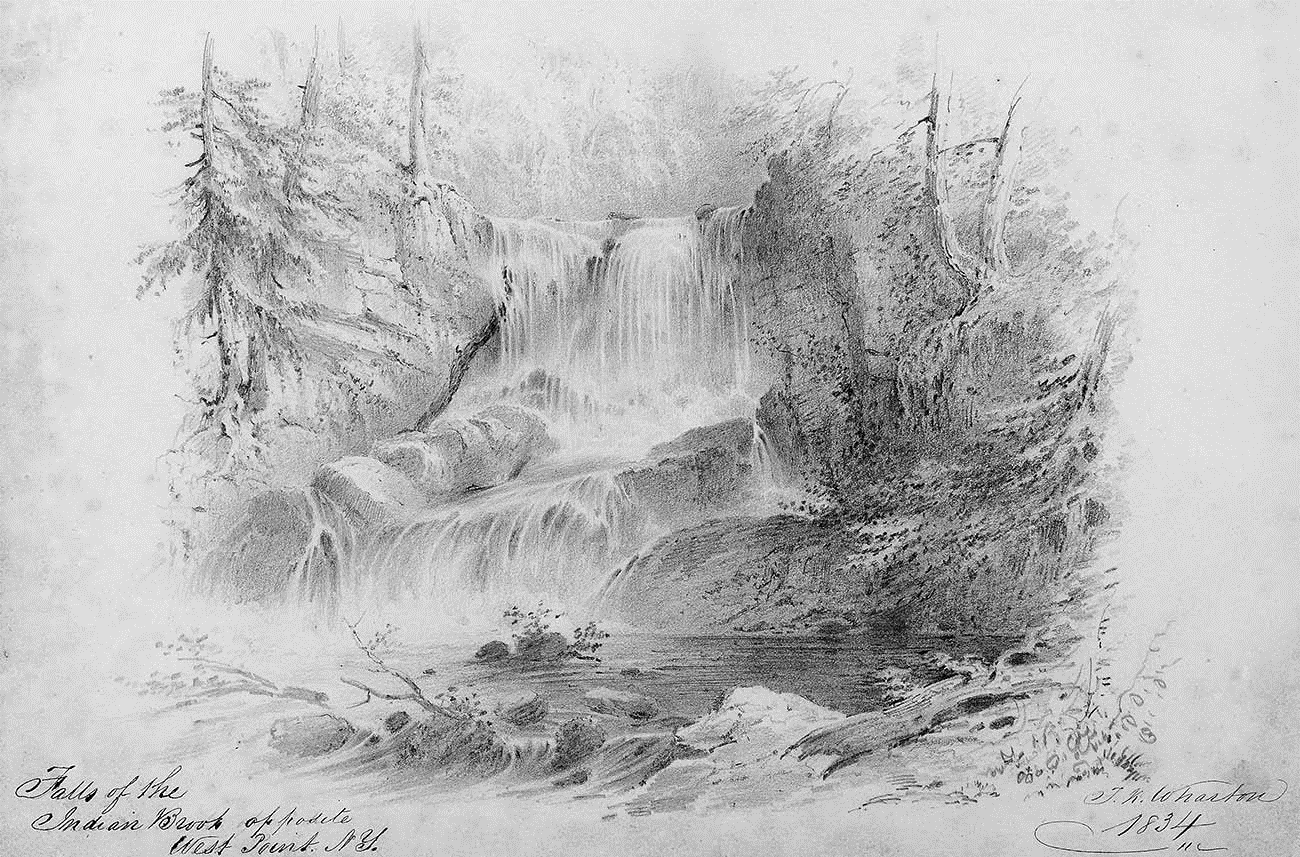 “Falls of the Indian Brook opposite West Point, NY, 1834,” by Thomas Wharton (Click to enlarge.)

The book includes a drawing of Indian Brook Falls. Was there a parking problem there in the 1830s?
A: No! But there was an episode after one of Kemble’s parties. Wharton described it as a “riotous excursion to Indian Brook Falls.” It was kind of exotic, mysterious. It had a certain aura, an unusual place to visit at midnight, with the moon up.
W: Wharton was attuned to the tourist destinations of his day. Indian Brook Falls was in all the travel guides. If you were stopping on this side of the Hudson, it was one place you’d want to see. Cousins Hotel at West Point had a launch that took people there a couple of times a day.

What did Wharton think of the Hudson River?
A: He had a literary, romantic view of the importance of nature and found this area to be amazing. He has long descriptions of it.
W: He was awestruck when he got here in 1830. But by 1853 he wrote, “I’m always impressed with the majestic nature of the north, but the genteel nature of the south will always capture my heart.” His father-in-law owned a plantation and had slaves. 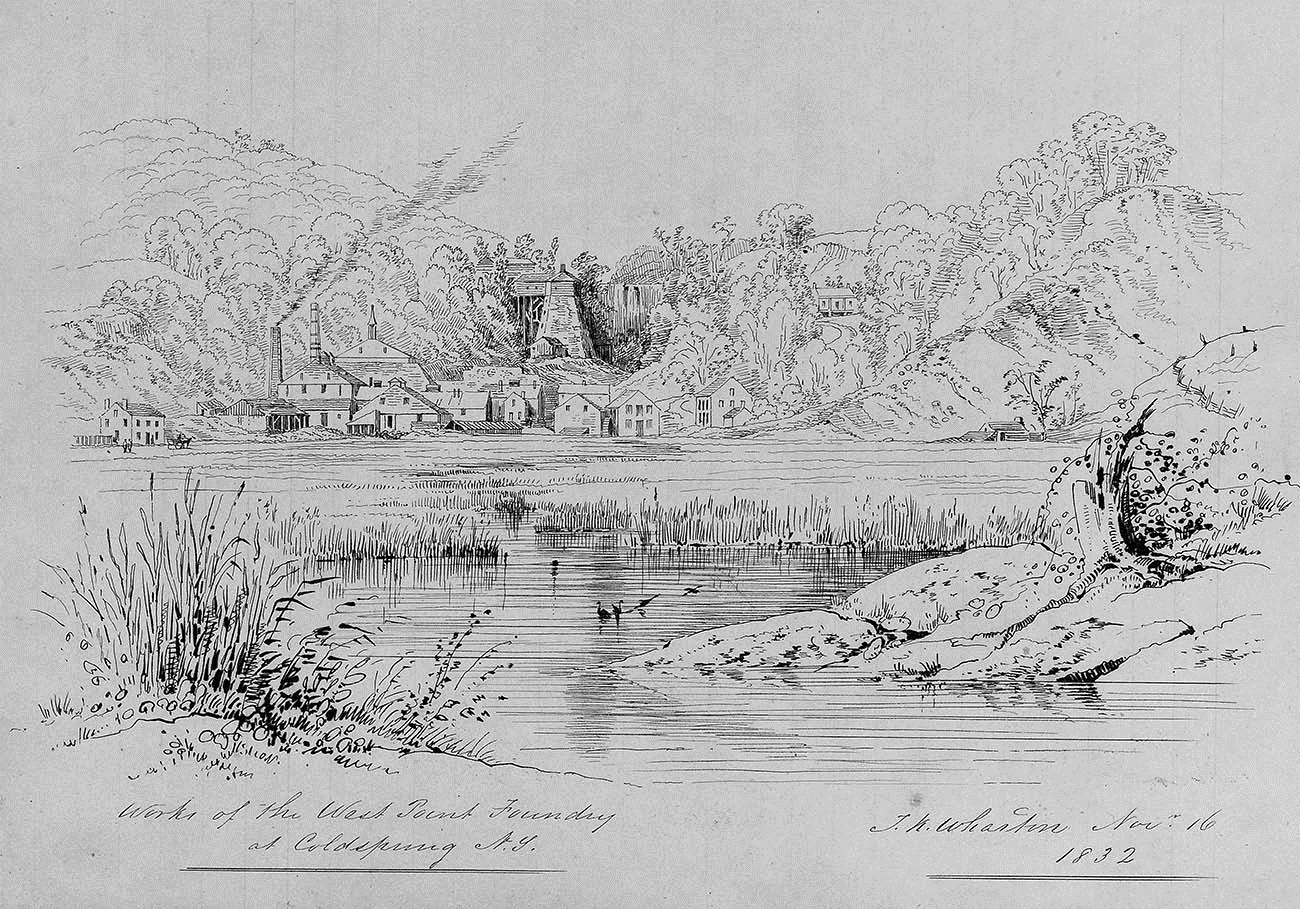 “Works of the West Point Foundry at Coldspring,” 1832, by Thomas Wharton (Click to enlarge.)

Wharton also traveled a lot. Was that arduous?
W: I think he enjoyed travel but was occasionally annoyed by overpacked steamboats or railway carriages. He seemed exhilarated by rail travel in the 1850s. It was not a complete novelty by then but still risky. He mentions bridge collapses and engine explosions. He didn’t seem concerned. It’s just the way things were.
A: The risk is hard to imagine. On the Hudson it was common for steam-boats to tow the passenger vessels because the steamboats blew up all the time. There were a lot of explosions.

What took Wharton to Boston?
A: After Thayer clashed with Andrew Jackson, he was reassigned from West Point to Boston to build fortifications around the city. Wharton visited him. That’s interesting because Wharton became fanatically pro-Confederacy, a peculiar turn after living in the north for so many years.

What did you find most valuable about his journals?
A: You see life as it was. Wharton doesn’t know what’s going to happen the next day. There’s a sort of uncertainty, mystery; it’s almost voyeuristic. It’s intimate, what was important to him, what worried him. It’s fascinating to get inside the head of someone from that time. 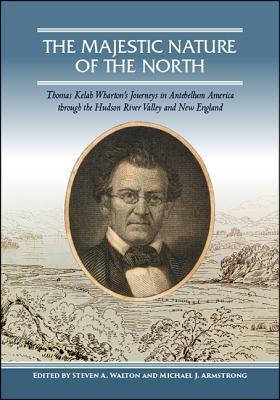 After arriving in the U.S. at age 16, Thomas Wharton lived in Ohio for two years before venturing to New York City to apprentice as an architect. To escape a cholera outbreak, he traveled up the Hudson to stay in Hyde Park. While there, he met the commandant of West Point, who invited him to stay at the academy, and while at West Point, he met Gouverneur Kemble, who lived in Cold Spring.

In a journal entry dated November 1832, shortly before his departure to take a teaching job on Long Island, Wharton recorded his impressions of the village, which he visited by taking a ferry across the river past Constitution Island.

The little village of Coldspring, nestling in its pleasant cove under the shelter of the mountains, has no rival on the River for beauty of situation. It is scattered along the beach of a shallow bay in expansion of the main stream and terminates in a long wharf or steamboat landing as shown in the sketch.

Uplands of greater or less fertility rise immediately behind it, and terraces not too sloping for cultivation, and over the whole towers the giant mass of “Bull Hill” with its jutting crags, showing bold and artistic projections amidst the umbrage of its dense woods. To the north between the bases of the mountain chain and the water’s edge is a pretty fair waggon road which I remember once pursuing nearly as far as Fishkill Landing for the sake of the splendid combinations of mountain and river scenery which reward you at every step. 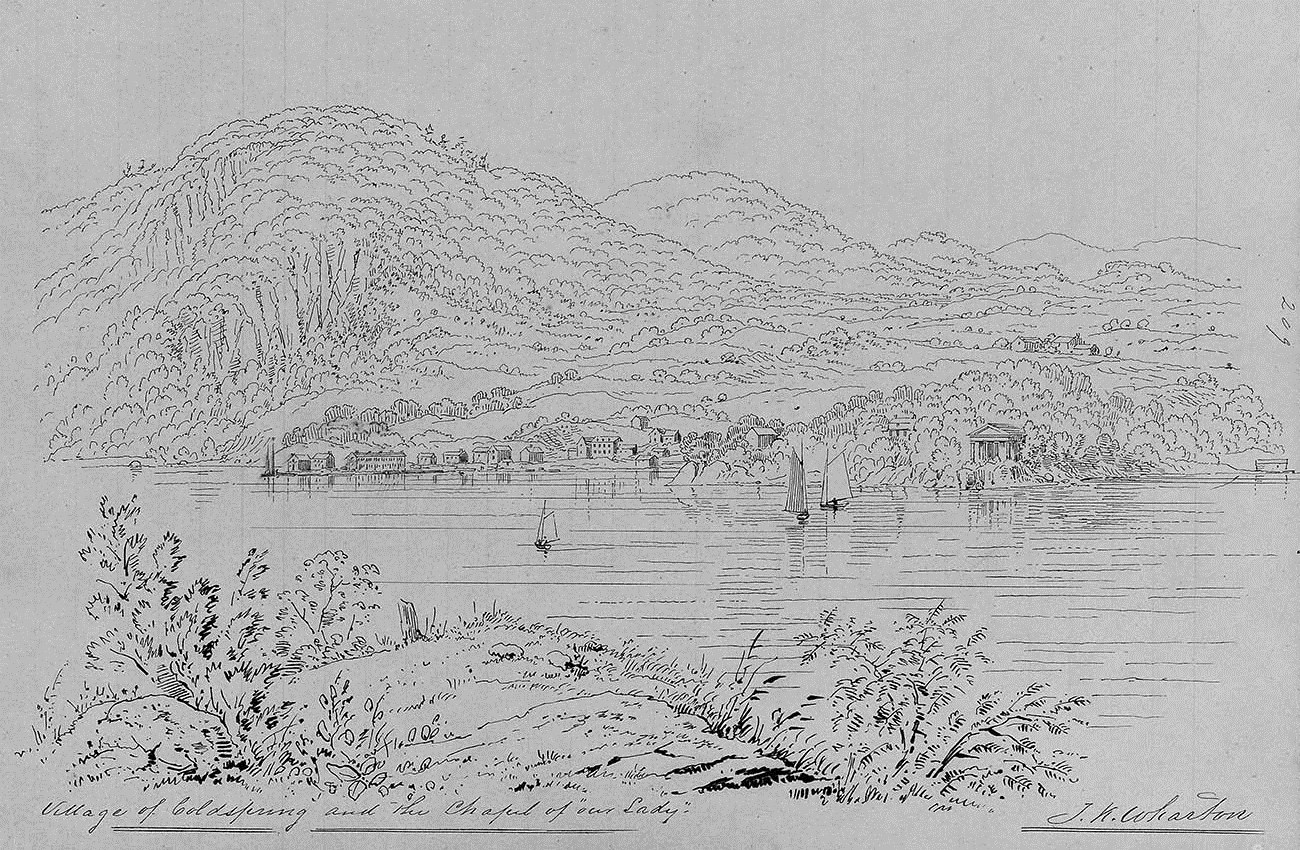 “Village of Cold Spring and the Chapel of our Lady,” about 1835, by Thomas Wharton (Click to enlarge.)

Southward the Bay is ﬂanked by ledges of rock pushing out boldly into the river and fringed with pleasant woods. One of these rocky Points was selected by Mr. Kemble for his “Chapel of our Lady” and a more poetic position for a shrine could hardly be imagined. Having a vast number of Catholics employed in his works, he conceived the idea of providing them with suitable accommodations for sabbath worship, and accordingly made choice of the spot in question on which he erected a neat Tuscan chapel as shown in the sketch.

Two years later, in 1834, Wharton returned to Cold Spring for a visit. At Kemble’s home, he met Washington Irving, best known for his short stories “Rip Van Winkle” (1819) and “The Legend of Sleepy Hollow” (1820).

[After dinner] … Irving and [painter Thomas] Sully … set out on a moonlight excursion to the “Falls of the Indian Brook” [in Garrison]. I regretted much that I had declined joining them. Sully gave us a graphic description of the trip on their return. Irving’s elegant and playful humour sparkled all the while as they wandered among the rocks of that beautiful and secluded dell, but he concluded that altho’ it might do very well for the young people at the “witching noon of night” yet for himself he must conform his ambition to the retrospect of what he has already seen for the rest of his life….

[The next morning] after breakfast Mr. Irving threw himself on the smooth green sward in front of the house and taking a book observed that the present style of imaginative works was far too hasty and negligent — dashed oﬀ with rapidity, and replete with crudities — arising, he thought, from a too ready compliance with the manner of [Sir Walter] Scott, which became necessary to him from the great demand for his works, but which, even in him, was attended with disadvantages that subsequent writers don’t seem aware required the redeeming qualities of his commanding genius to make amends for.