To study animals in the wild, researchers have recently embraced two new tools: radio telemetry and DNA tests. They join sensor-triggered “camera traps,” which have been around longer but are still highly useful.

On Sunday (April 14), three local scientists spoke at a community forum, “Wildlife Through the Hidden Lens: The Secret Lives of the Creatures Among Us,” organized by the Hudson Highlands Land Trust. The event, held at the Old VFW Hall in Cold Spring, was sold out.

Ed McGowan, a Garrison resident who is director of the Trailside Museums and Zoo at Bear Mountain State Park, said more camera traps are being installed by researchers and “citizen scientists” because their costs have fallen to around $50 each. DNA analysis is providing important information on species and their origins. “Studies which used to take six years now can be done in 20 minutes,” he said. And radio telemetry allows researchers to track the movement of animals such as turtles, moose and snakes using GPS, he said. 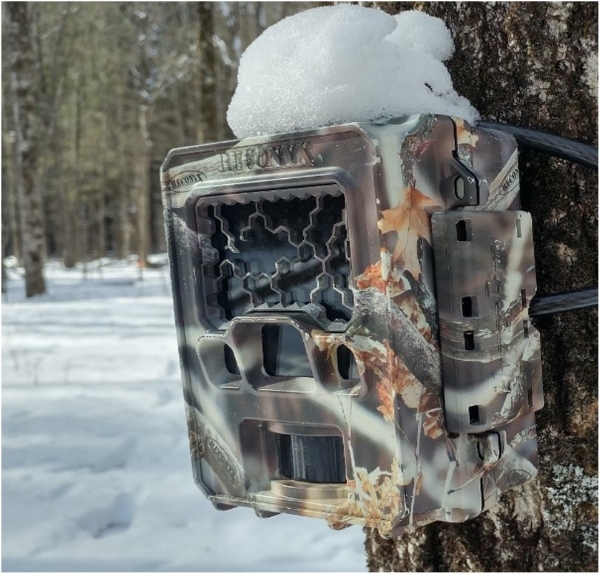 A camera trap set up in the woods over the winter. (Photo courtesy Scott LaPoint)

McGowan said recent projects in New York State parks have monitored piping plovers, a small bird which is “not doing well” in terms of maintaining its numbers; the small-whorled pogonia, the rarest plant in the state; and the decline of New England cottontail rabbits in Fahnestock State Park. 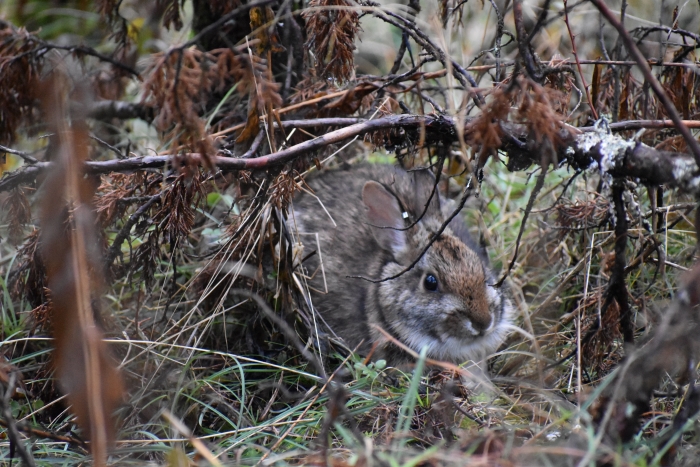 He also is taking part in a four-year project monitoring wintering golden eagles in the Highlands as part of a national survey on the birds.

“We needed to figure out how many we have, so we got a roadkill deer, put it out in the forest and waited for cool things to happen,” he recalled. “First came the crows and ravens, during the day,” along with “black wolves” (coyotes). “At night Eastern coyotes circled the carcass, joined by bobcat, red fox, some intrepid raccoons, possum, mice, owls and golden eagles, which have 7-foot wingspans and massive talons. 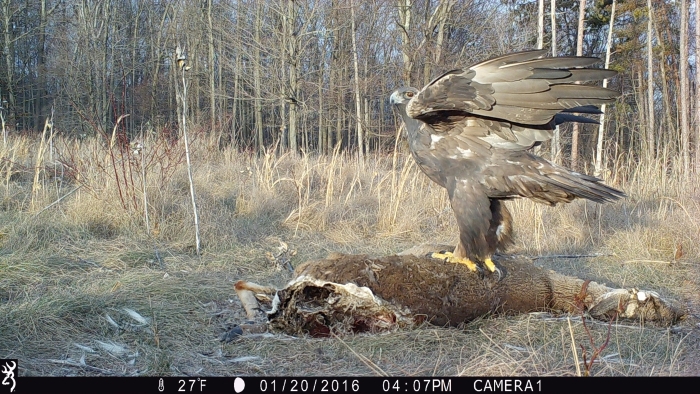 “We saw some strange bedfellows, like possums hanging around bobcats with impunity — maybe they don’t taste very good!” he said. “We saw deer investigating the carcass; maybe there were doing some forensic information gathering, but they didn’t eat it.”

Another project involved four years of study of black bears in the 47,000-acre Harriman State Park, he said. The researchers watched the bears but also recorded their scratchings on trees and analyzed their droppings. They were able to determine what the bears were eating and how they climbed trees to get food, and their ritualized behavior, like rubbing up against trees and “stomp walking” in depressions they had left in the ground.

They could also observe inter-species interaction, for instance between bobcats and bears, and “we got a lot of bear selfies,” McGowan said with a laugh. 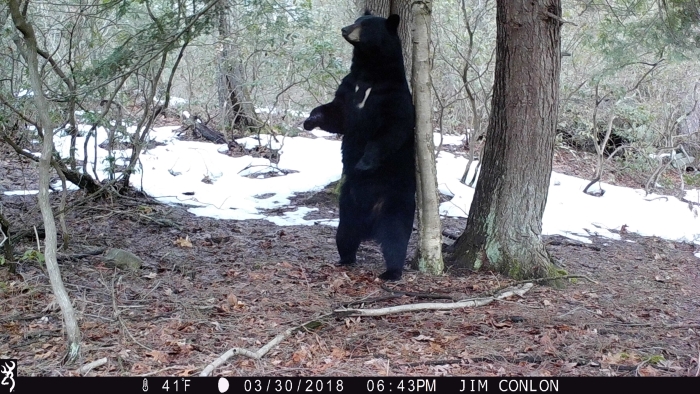 A bear captured on a camera trap as it rubs against a tree. (Photo courtesy Jim Conlon)

“Without this valuable footage,” he explained, “you’d never know there was a whole community of animals interacting. We thought there were about 50 bears [in Harriman] but learned there are more like 100. We’re not at capacity, but we’re getting there. We had about 20 cubs last year. Just 20 years ago we had young males but no females or cubs.”

McGowan said the cameras had not caught any mountain lions. “There are lots of sightings, but only one was legitimate, and that was of a mountain lion killed on the road in Connecticut,” he said. “He had traveled from South Dakota. There’s certainly no resident population here. Camera trap coverage isn’t complete enough to say there are none with certainty. But there are lots and lots of bobcats near us, and their numbers are on the rise.”

Scott LaPoint, a research scientist at Black Rock Forest, a conservation and research consortium in Cornwall, said his research combines data collection with spatial and statistical analyses to get an idea of how landscape facilitates the movement of animals. 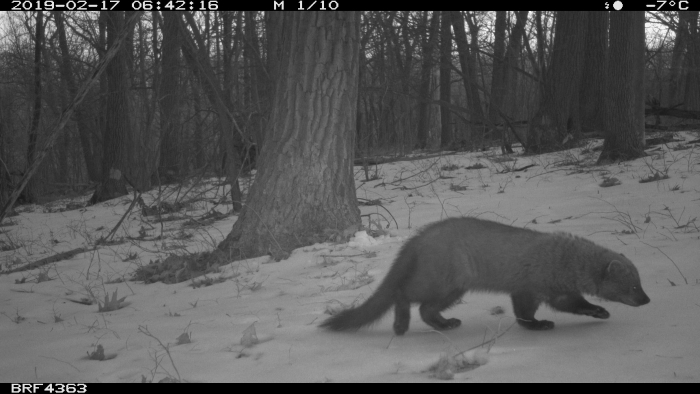 He said he has focused on fishers, a carnivorous mammal that is similar to, but larger than, a weasel. “Fishers need forests,” he said. “They do an awful lot in trees. So the question is, ‘Are forests doing what we want them to?’ ”

The fisher was once found solely in the Adirondacks, and it was nearly wiped out during the fur trade, but is now doing well, he said. “Somehow populations are connecting through forests, which are supporting these once-rare animals,” he said. He hopes to document their distribution in the state through camera traps and other tools.

Next up was Brent Boscarino, a former high school science teacher now with the New York-New Jersey Trail Conference, who shared sites such as ebird.org and inaturalist.org and apps such as Seek that allow citizen scientists to upload and share data.

“With these apps, you can take a photo, add an identification and observational details and they will give you suggestions of what you’re observing,” he explained. “Submit it, and someone will identify it for you.”