A conversation with a chess master

Abby Marshall, 27, a New York City resident who has been a coach for the Haldane school chess team since 2016, has reached the rank of “chess master.” Only “international master” and “grandmaster” are higher.

What fuels your passion for the game?

I started playing in kindergarten — I always wanted to beat the next strongest kid. I love how there are always deeper levels to the game. Whenever I feel like I know a lot, I hang out with stronger players and realize I don’t know anything.

How do you prepare for a tournament?
I study the other players, their openings. I do a lot of chess tactics, study typical situations, find the best move. I also run and lift weights. It’s good to be in shape. It’s draining to sit there for five or six hours. You feel like you’ve run a marathon. You need to have the energy to do that.

*
Battery
: Lining up two pieces that move similarly, like a queen and rook or queen and bishop.
Blockade: Placing a piece in the path of a “passed pawn” to keep it from promoting.
Blunder: A bad move that turns a win into a loss or draw, or a draw into a loss.

Do you enjoy beating certain players more than others?
I’d say so. One of my earliest rivals was named Ksun. We’d always face each other at the Ohio state championships and at the nationals. He usually beat me, but I won a couple of times.

What do you think of computer chess?
Online chess brought the game to the world. If you live in a place with little chess, it helps you connect with other players. Playing against a computer is good, too. The Alpha Zero computer is stronger than the strongest human player. The games it plays against itself are incredible, deep-level chess. 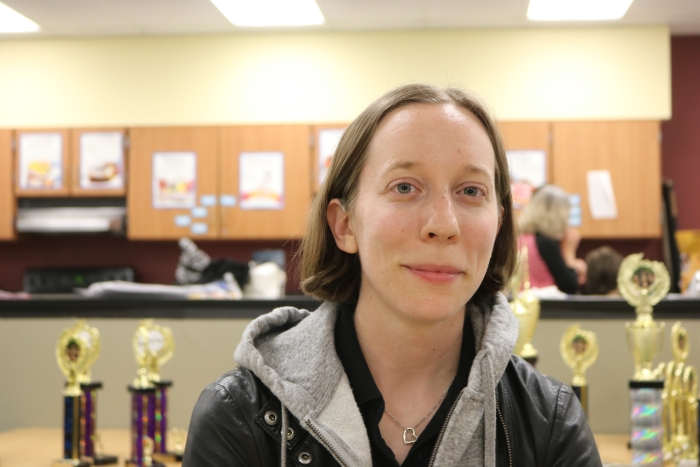 What is the male-female balance in the game?
When I was younger, it was one girl for every 100 boys. It’s still incredibly lopsided, maybe five players in 100 are girls.

What would be considered “bad form” in chess?
Not shaking hands before and after a game is a big one. Kicking under the table. Talking to your opponent or a coach. I’m always shocked when I see basketball coaches talking to players. You don’t do that in chess.

Do tempers ever flare?
Not during the game. You may be mad at yourself and get in the worst possible mood. There’s no referee. If you lose, it’s all on you. You can’t blame a bad call.

What is a grandmaster?

The World Chess Federation global ratings list 1,621 grandmasters, of which 1,585 are male and 36 are female. To be named a grandmaster, a player must achieve a rating of 2500 and have three favorable results in tournaments involving other grandmasters.

Marshall is a Woman FIDE Master, which requires a minimum rating of 2100 (her current rating is 2166 and her career best is 2208). In 2009 she won the invitation-only Denker Tournament of High School Champions, the first female player to ever do so.

Do you have a favorite chess set?
It would be the first set I got from my grandfather when I was six. It’s small but made of nice marble. I have five or six sets.

How do you improve your game?
I read chess books, the classics. A lot of players use the computer; I don’t do that much. Playing higher-ranked players and analyzing the game is a big part of it.

Do you ever step away from the game to clear your head?
That helps. It gets you more motivated to get back into it.

Do the best chess players have coaches?
Having a coach is important. They can look at your games, tell you where you’re going right or wrong. The coach isn’t always the better player. The best players in the world may have coaches who are not as good. The coach’s strength may match up with the player’s weakness, so the coach can help in certain areas. 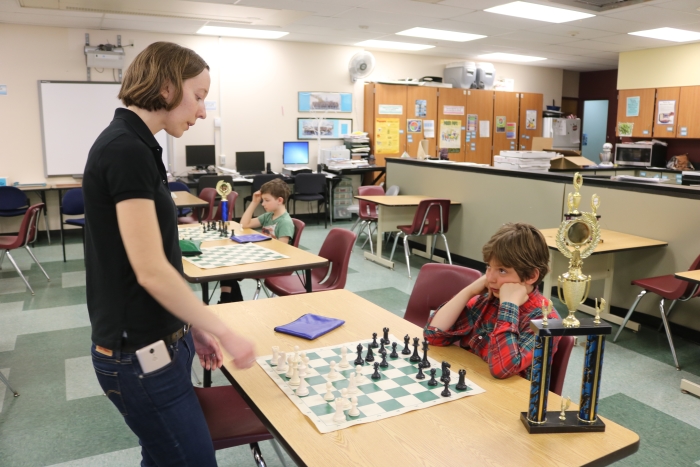 A young challenger takes on Marshall on March 30 at a Haldane tournament. (Photo by M. Turton)

Is there such a thing as home-field advantage?
I guess so, if you’re playing in your own city or state, surrounded by people and players you know.

Can the ability to concentrate be improved?
Exercise, such as running, can help you stay keyed in. One player I know said he talked to his pieces. He imagined conversations with them.

Do players sometimes overthink game situations?
It’s most common when you’re winning. You sense there’s a knockout blow and you’re trying to find it. If you can’t, you can get confused and choose a move that doesn’t work.

Does the first move set the tone of a match?
It’s not super important.

Does the U.S. have a chess capital?
It’s St. Louis, of all places, largely due to the opening of the St. Louis Chess Center in 2008. It’s a beautiful space that hosts world-class tournaments and school programs. Webster University, which offers chess scholarships, is also in St. Louis. You could also argue for New York City. The Marshall Chess Club in Greenwich Village has hosted top-level tournaments since 1915. So many schools have competitive teams in New York; tournaments regularly sell out with 350 or more participants. 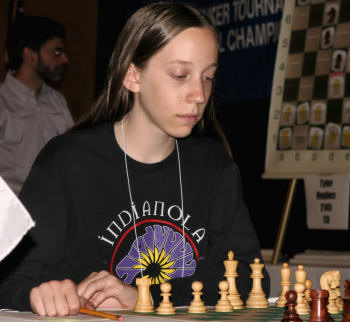 Abby Marshall competing at a national tournament in high school.

Is age a big factor?
Chess has prodigies, just like math and music. The youngest grandmaster ever was 12. There have been a handful of 13- and 14-year-olds and dozens of teenage grandmasters. I also know of players who achieved that in their 40s and 50s.

What has been your proudest moment as a player?
When I sacrificed both my rooks to beat the highest-rated player at the Virginia State Championships in 2006.

Do you think about becoming a grandmaster?
It is my dream.