The Haldane High School lacrosse team is set to wrap up a solid season next week with one game remaining before the playoffs open on Thursday, May 15.

Haldane (13-2) has never advanced beyond the Section 1 quarterfinals but this year’s team is hoping to change that. As of May 6, the team was ranked 13th in the state among Class D teams by the New York State Sportswriters Association. 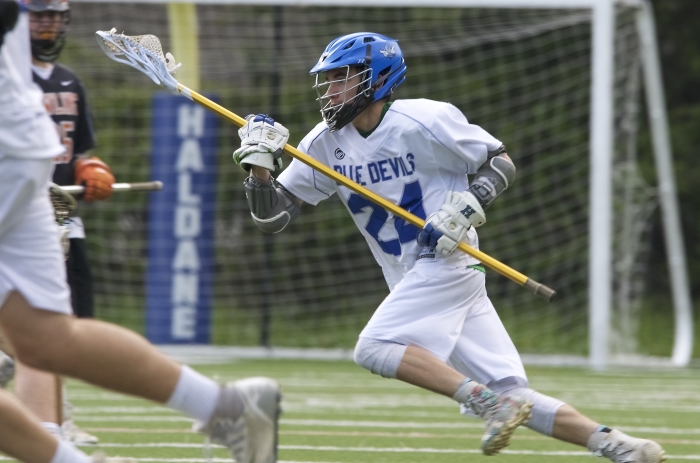 Nate Allen advances the ball during Haldane’s win over Pawling on May 7. (Photo by S. Pearlman)

“Our goal has been the same all season long — we want to play for a championship,” said Coach Ed Crowe. “We know the pedigree of the [Section 1, Class D] schools we’re up against [Bronxville, ranked No. 1 in the state; No. 4 Briarcliff; No. 6 Pleasantville; and No. 12 Westlake], but we feel we can play at a level where we can compete.

“We’re peaking at the right time,” he added. “We’ve been able to keep it together. We picked up a big win against O’Neill last week, and it showed us that even though we didn’t play our best, we can still come up with a win.” 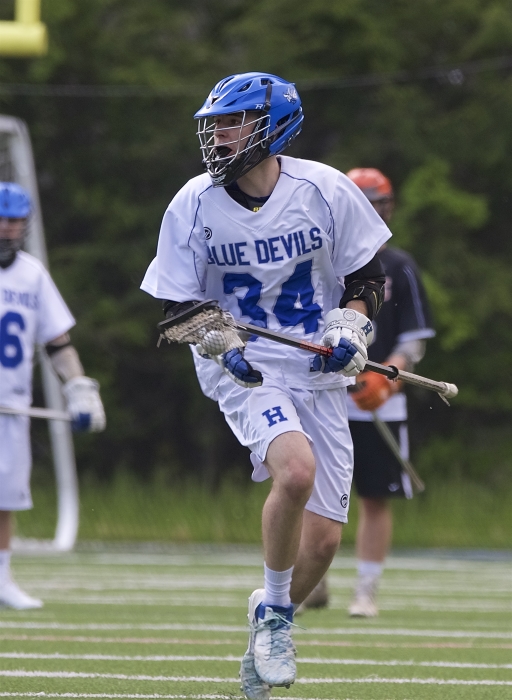 The Blue Devils have been playing well, easily defeating Pawling on Tuesday (May 7), 16-4, at home. Jagger Beachak led Haldane with four goals and an assist, Darrin Santos had three goals and an assist, Mame Diba scored twice and had three assists, Will Westerhuis and Sam Giachinta each had two goals and two assists, and Riley Johanson, Henry Weed and Jesse Sherman each scored. John Hankel made 10 saves in goal.

“We got up early and we stayed up,” Crowe said. “We had nice balance, a lot of guys scored, and our defense did a nice job shutting down Pawling. We’re getting a great collective effort.”

The week before, Westerhuis scored the game-winner in the 10–9 victory over O’Neill. “It was one of the highlight wins of our season,” Crowe said. “They beat us convincingly the last three years in a row, so it was a pride thing for our team. They are a cross-river rival, so we take great pride against them; it was right up there with the Putnam Valley win [10-9, on April 15]. Those have been our two most memorable wins of the season — so far.”

Playoff matchups for Section 1 have not been set but Haldane is ranked as the fourth seed among Class D schools in the section and will likely host No. 13 Rye Neck (4-11) on May 15.