In the 1920s, the blue buildings along Garrison’s Mandalay Drive formed an agro-industrial complex that housed the staff and laborers of an estate on the Hudson River.

Among the six structures (which had the same ownership from the 1970s until two years ago) was an icehouse. Channels from a concrete pond ran into the house, where the water became ice.

Today the icehouse has been re-purposed as an art space also called The Ice House, operated by Philipstown newcomer Jayne Drost Johnson. 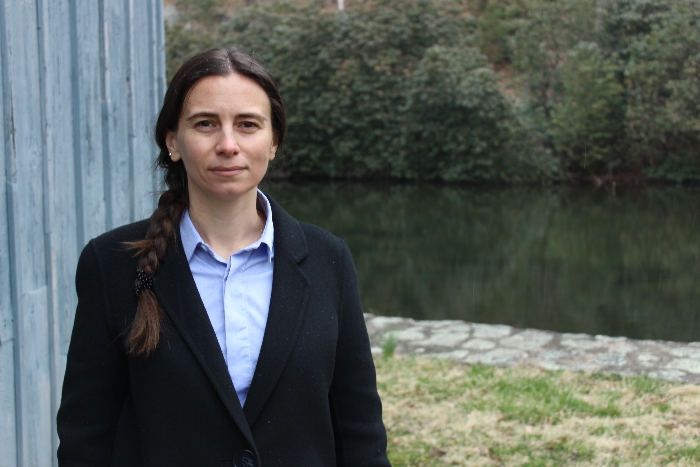 Jayne Johnson at The Ice House (Photo by A. Rooney)

Through her firm JDJ, Johnson runs what she calls an “art program,” rather than a gallery. “I want to retain a sense of fluidity,” she explains. “For some, the word gallery means a stable of artists whom you represent and you do shows of. That could happen, but for now I want to be responsive to what artists need, whatever the artistic content is.”

The Ice House includes two structures: the former icehouse and, just across the lane, a cottage, which is usually where Johnson stays on weekends with her husband and their young daughter. (The family divides its time between Brooklyn and Garrison.) 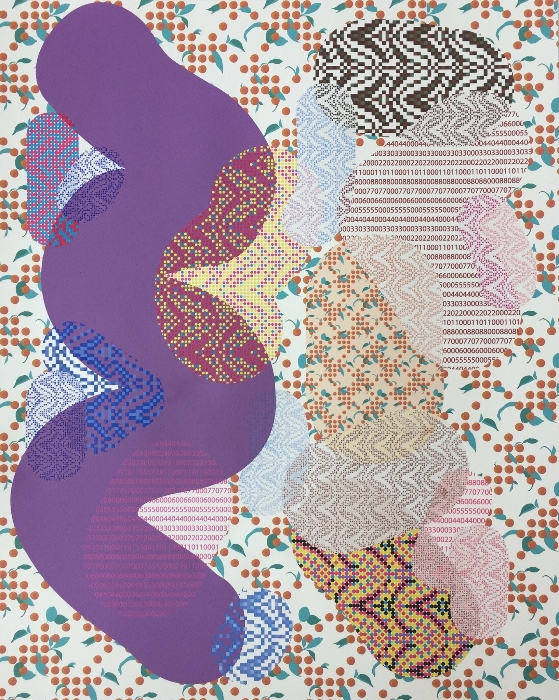 Since its December opening, The Ice House has hosted four exhibits in the two spaces. The larger space has high ceilings and a floor-to-ceiling window that provides natural light. A metal spiral staircase winds its way upward.

Johnson says she found the space by happenstance, soon after her daughter was born, and after 15 years of working in the New York art world. “I had one of those middle-of-the-night ideas, got up, looked online and saw pictures of this place,” she recalls. “I went to take a look and realized I couldn’t have dreamed it up. Having an art experience that feels this intimate would not be possible in New York City.”

Visitors have come every weekend so far, she says, “although getting people over the mental hurdle of getting on a train can be challenging, but I think it will be a lot less so now that spring is here.” She says that while making an appointment may be off-putting for some (she hopes to eventually have set hours), she encourages everyone to call and come by.

The Ice House’s current exhibit, Future Homemakers of America, by Mark Barrow and Sarah Parke, includes paintings on hand-woven fabric, drawings, a window installation and wallpaper. It runs through June 16. The title, Johnson says, is a reference to artists fusing their work and home lives.

Also showing, in the cottage, is an untitled piece by Robert Barber, from his Freeway Series (1973-74). 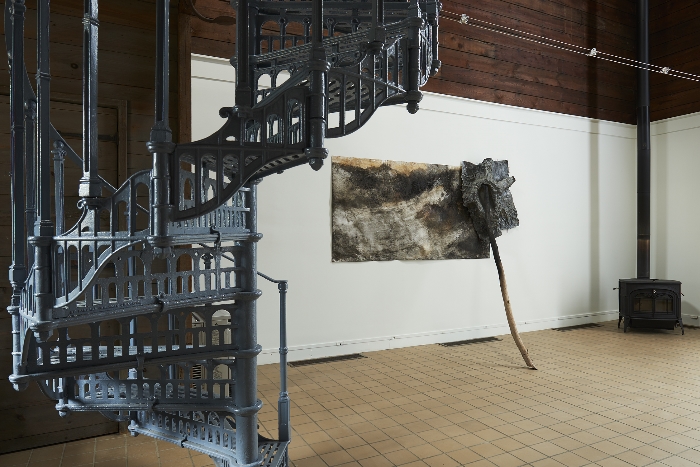 Previous exhibits have included a group show by three artists working with found objects, a solo show by Peekskill artist Athena LaTocha, and a work by Leah Raintree that used local sediment, stone and ice in a photographic process.

Johnson says her plans for the summer include a group show based on the concept of domestic labor. “While not everything is site-specific, all of these things are on my mind,” she says. “This isn’t a white cube space. There’s an ambiance which will pervade everything.”

The Ice House is located at 17 Mandalay Drive, off Route 9D, about 2 miles north of the Bear Mountain Bridge. The exhibition space is the tall building next to the pond, and there is a parking area on the north side of the building. To visit, call or text 518-339-6913 or email [email protected]