Lessons from local inventor and musician

Patrick Cummings first showed off his iGuitar at a 2005 trade show. His invention transforms an electric guitar into an orchestra thanks to three technological components: a USB port linking the guitar to a computer; a magnetic pickup called a piezo that mimics the sound of an acoustic guitar; and a synthesizer access that can replicate the sound of any musical instrument, from an organ to a violin.

“It’s like comparing the 64 Crayola box to a No. 2 pencil,” he says from his shop on Main Street in Nelsonville. “You can create a symphony.”

When the iGuitar is connected to an iPad with the right software, a player can also record his own music, adding additional tracks such as bass and drums. 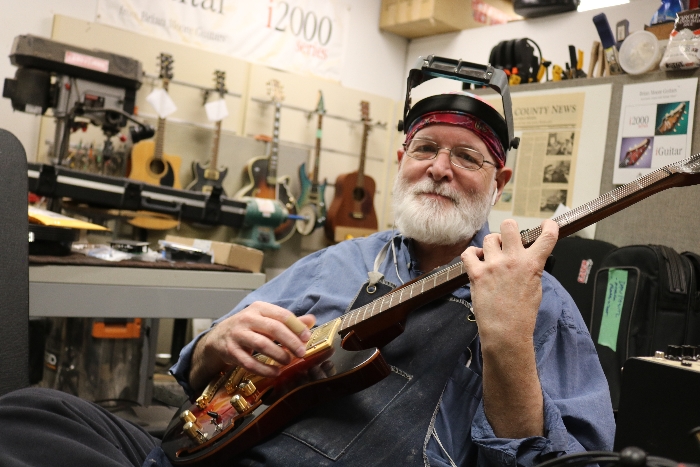 Patrick Cummings in his Nelsonville shop (Photo by M. Turton)

Cummings patented his technology but, unfortunately, since The Current first profiled him in 2012, copycat versions from Singapore and China have appeared on the market.

It was a difficult learning experience.

“All a U.S. patent guarantees you is the ability to spend $600 an hour on a patent attorney to defend it,” Cummings says. “If you can’t do that, the patent is meaningless.”

There was domestic competition, as well, but Cummings says he was prepared for that. “I’m still standing because I was crazy enough to go the distance” in litigating two U.S. guitar companies that he believed had violated his patents.

“Greed sets in, and big business is run by greed,” Cummings said. “Big business looks at a little guy with a good idea, a guy sitting in a shop in Nelsonville, and they think he doesn’t have the resources to fight them.”

Cummings said he rolled the dice, guessing the companies wouldn’t have patent attorneys on retainer. He was right.

“When they realized that even filing a response in court would cost them hundreds of thousands of dollars,” they backed off, Cummings said. It helped that he knew he had an airtight case.

Once word spread through the industry that Cummings had stood his ground, infringements by U.S. manufacturers were no longer a problem, he says.

The USB-guitar didn’t turn out to be the “home run” he had hoped for. Financial issues led him to downsize from a 17-employee operation in LaGrange to his one-man Nelsonville shop.

But there are no regrets. “This has been the most joyous time of my career,” he said. “It’s turned out to be a very positive thing.” He now has licensing agreements with several companies that use his technology, including Massachusetts-based Fishman, which “builds electronics for almost every guitar on earth,” including Fender and Martin.

Cummings sells conversion kits that start at $800 for musicians who can’t afford a custom-built instrument, and he also sells authorized Asian-made versions for $1,500. That’s possible because Chinese manufacturers realized “small business is the engine of growth in the U.S.” and will fill small orders rather than relying on big contracts. “Instead of having to drive out to JFK to clear a big order through customs, small orders come right to my shop by UPS and I sell them on my website,” he says.

He says the iGuitar allows guitarists to do the higher-paying work, including for movies and documentaries, that digital keyboard players monopolized for years.  He saw this for himself in 2017 when he was hired to do background music and sound effects for Free to Rock, a documentary that examines how rock music helped end the Cold War.

“I don’t do projects like that every day, but it’s fun when it happens” Cummings says. “When the credits rolled it was pretty cool to see Patrick Cummings up there with the likes of Elton John, The Nitty Gritty Dirt Band, Elvis and The Beatles.”