This isn't your grandfather's guitar.

Summing up local shop owner Pat Cummings is no simple matter. He’s a whiz at electrical engineering. He’s a talented musician. He’s a skilled craftsman. He’s a patent-holding inventor. He’s a savvy businessman. What do you get when you combine those varied human ingredients? Cummings probably says it best himself. “I’m saturated in guitars.” Cummings owns and operates iGuitar Workshop  located on Nelsonville’s main drag across from Pali’s Deli. It really is a work-shop. Cummings builds high-end electric guitars and repairs and restores all manner of stringed musical instruments. His guitars, sold under Brian Moore Guitars brand, are unique, incorporating cutting edge, patented technology that puts an entire orchestra’s instruments at the finger tips of a single guitar player.

While iGuitar Workshop can provide musicians with any type of custom-designed electric guitar, the flagship Brian Moore models feature three elements that set them apart as technology-based instruments: a USB port that links the guitar directly to a computer; a piezo, (a magnetic pick-up that enables it to mimic the sound of an acoustic guitar) and a synthesizer access that enables it to produce the sound of any musical instrument – from piano to viola to French horn. And if the USB guitar is connected to an iPad – which features GarageBand software – the player can record his music, adding other tracks such as bass and drums. 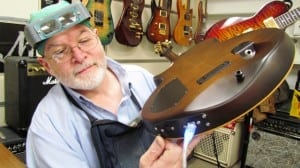 When Cummings and his colleagues showed off their USB-equipped guitar at a trade show in 2005, ‘copy cat’ versions produced in Asia soon appeared on the market. That resulted in the company losing some of its investors who were concerned that patents had not been received in time to stop production of the knock-offs. Cummings now holds two U.S. patents on his USB guitar technology, which is also now sold by the Fishman Company through a licensing agreement. The financial disruption, however, was serious enough to force the company to downsize and to rethink its marketing methods. Originally they sold their guitars the traditional way – through music stores – but after downsizing they went to a factory-direct system. That method is better for both the company and its customers since music stores no longer get a piece of the pie. “By eliminating the middle man we can give more personal attention to customers,” Cummings said. “Most of my business is off of the web. We now ship all over the world – Los Angeles, Germany, Slovakia, Japan, Korea….the guys in the post office know us!”

The claim that the iGuitar can create an orchestra’s worth of sound is no exaggeration. Carlos Alomar, a professor at Stevens Institute of Technology who co-wrote the song “Fame” along with David Bowie and John Lennon, created an iGuitar orchestra called the Midi Magic Orchestra. It was made up of a group of high school student musicians who used Brian Moore guitars on loan from Cummings’ Nelsonville Shop. [Listen in to one of their rehearsals]

The USB-equipped Brian Moore Guitars have benefitted from some heavy duty endorsements in the music world. John Abercrombie, who lives in Putnam Valley and, in Cummings words, “…is one of world’s best guitarists,” uses a Brian Moore – as does Russ Freeman of The Rippingtons, country star Clint Black and Jim Vivino of Conan O’Brien fame. The television show Scrubs used one of the Nelsonville-produced guitars for its background music. 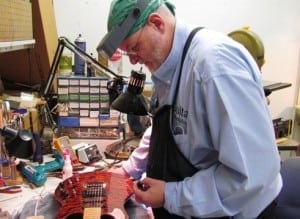 Cummings prepares a guitar for shipping.

Cummings said that in a good year he manufactures about 50 guitars. Prices range from $1,495 for an imported version of the USB guitar to about $5,600. “We recently did a custom inlaid guitar for $9,000,” he said. Cummings also caters to customers who already have a guitar, want his USB technology but can’t afford a new Brian Moore model. “We can convert most guitars for less than $1,000,” he said.

About half of Cummings’ business comes from restoring or converting stringed instruments. “We take an ill guitar that plays poorly, make it well – and make it play beautifully,” he said. He recently refurbished a well-traveled guitar for Cold Spring-based singer-song writer Dar Williams. “She told me it plays better now than when she bought it,” Cummings said.

iGuitar Workshop has serviced some unique and precious instruments. Sitting in his shop now, waiting to be brought back to life, is a Phonoharp Co. Columbia #3 Zither that is more than 100 years old. “I’ve restored a 1900 mandolin; a 1920s Gibson Archtop and a 1959 Fender bass,” Cummings said.

Cummings sees definite priorities in how he builds his iGuitars. “Tone is most important. Next is how it’s set up – you want it to feel great. Then it’s the look and features.”

Every guitar has its own unique personality according to Cummings. “Every time you put elements of Mother Nature together – each guitar is going to be different. The density of the wood is different, the pickups are slightly different. Even different fingers, and different densities of the hands that play a guitar will make it sound different,” he said. One of the keys to that unique, individual sound is the wood that is used. Guitars use woods that are in the middle weight range. To use an extreme example, balsa is too light. Oak is too heavy and doesn’t resonate. “But certain mid-range woods are very musical – like mahogany, basswood, alder and southern swamp ash,” Cummings said. The environment factors into guitar making as well. Brazilian rosewood can no longer be used due to severe deforestation in that country. “I don’t like a lot of government regulations placed on guitar shops – but without regulations the planet could be pretty bald,” Cummings said. 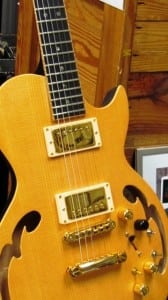 Properties of the wood used affects a guitar's sound

Cummings has played guitar for most of his life.  “I was 12 when I got my first guitar, a Teisco, probably $49 at Sears, but I thought it was the greatest thing on earth. When I was 13, I converted my brother’s lefty guitar into a righty. I built a Frankenstrat when I was 17,” he said. He also teaches guitar. “I’m self taught but I studied music pretty intensely. I teach people to teach themselves. I give them the tools they need. I teach them how to use their ears.”

Brian Moore Guitars was founded in 1992 by Cummings, Brian Moore and Kevin Kalagher.  Moore, a non-guitarist with a background in furniture design, had worked at Steinberger Sound while Cummings was General Manager of several divisions of Gibson Guitars. Kalagher, a successful business man as well as a musician and collector of musical instruments, provided the start up capital. Brian Moore left the company in 1998 but the brand name remained the same.

Comfortably ensconced in Nelsonville, Cummings laughs when he says he works “California hours” from 12 to 8,” because he has numerous customers on the west coast. “But in reality, it’s more like 8 to 8,” Cummings said. Always the innovator, Cummings, a resident of Putnam Valley, has a couple of new projects in the works – a semi-hollow electric guitar and an “iAcoustic” prototype. You can learn more about iGuitar Workshop by visiting his website.