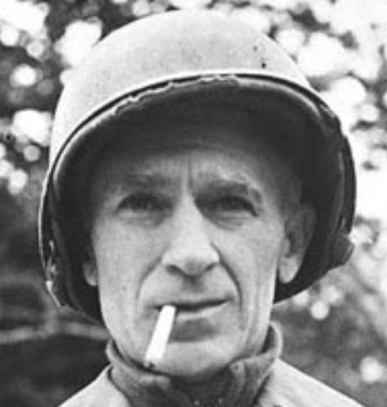 NORMANDY BEACHHEAD, June 17, 1944 — In the preceding column we told about the D-Day wreckage among our machines of war that were expended in taking one of the Normandy beaches.

But there is another and more human litter. It extends in a thin little line, just like a high-water mark, for miles along the beach. This is the strewn personal gear, gear that will never be needed again, of those who fought and died to give us our entrance into Europe.

Here in a jumbled row for mile on mile are soldiers’ packs. Here are socks and shoe polish, sewing kits, diaries, Bibles and hand grenades. Here are the latest letters from home, with the address on each one neatly razored out — one of the security precautions enforced before the boys embarked.

Here are toothbrushes and razors, and snapshots of families back home staring up at you from the sand. Here are pocketbooks, metal mirrors, extra trousers, and bloody, abandoned shoes. Here are broken-handled shovels and portable radios smashed almost beyond recognition, and mine detectors twisted and ruined.

Here are torn pistol belts and canvas water buckets, first-aid kits and jumbled heaps of lifebelts. I picked up a pocket Bible with a soldier’s name in it, and put it in my jacket. I carried it half a mile or so and then put it back down on the beach. I don’t know why I picked it up, or why I put it back down.

Soldiers carry strange things ashore with them. In every invasion you’ll find at least one soldier hitting the beach at H-hour with a banjo slung over his shoulder. The most ironic piece of equipment marking our beach — this beach of first despair, then victory — is a tennis racket that some soldier had brought along. It lies lonesomely on the sand, clamped in its rack, not a string broken.

Two of the most dominant items in the beach refuse are cigarettes and writing paper. Each soldier was issued a carton of cigarettes just before he started. Today these cartons, by the thousand, water-soaked and spilled out, mark the line of our first savage blow.

Writing paper and air-mail envelopes come second. The boys had intended to do a lot of writing in France. Letters that would have filled those blank, abandoned pages.

Always there are dogs in every invasion. There is a dog still on the beach today, still pitifully looking for his masters.

He stays at the water’s edge, near a boat that lies twisted and half sunk at the water line. He barks appealingly to every soldier who approaches, trots eagerly along with him for a few feet, and then, sensing himself unwanted in all this haste, runs back to wait in vain for his own people at his own empty boat.

Over and around this long, thin line of personal anguish, fresh men today are rushing vast supplies to keep our armies pushing on into France. Other squads of men pick amidst the wreckage to salvage ammunition and equipment that are still usable.

Men worked and slept on the beach for days before the last D-Day victim was taken away for burial. 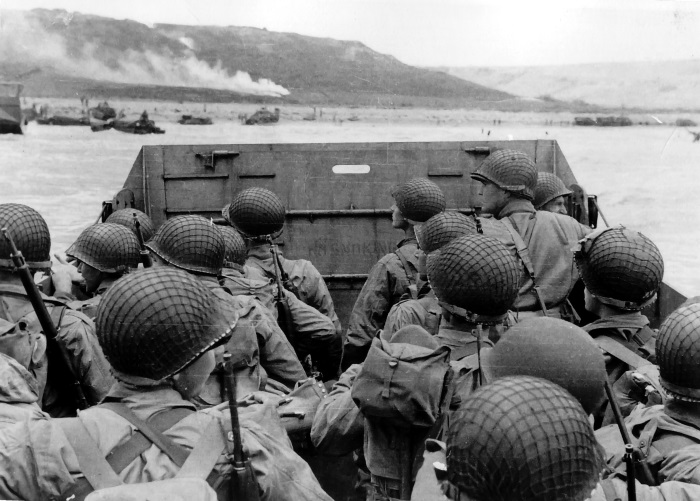 I stepped over the form of one youngster whom I thought dead. But when I looked down I saw he was only sleeping. He was very young, and very tired. He lay on one elbow, his hand suspended in the air about six inches from the ground. And in the palm of his hand he held a large, smooth rock.

I stood and looked at him a long time. He seemed in his sleep to hold that rock lovingly, as though it were his last link with a vanishing world. I have no idea at all why he went to sleep with the rock in his hand, or what kept him from dropping it once he was asleep. It was just one of those little things without explanation that a person remembers for a long time.

The strong, swirling tides of the Normandy coastline shift the contours of the sandy beach as they move in and out. They carry soldiers’ bodies out to sea, and later they return them. They cover the corpses of heroes with sand, and then in their whims they uncover them.

As I plowed out over the wet sand of the beach on that first day ashore, I walked around what seemed to be a couple of pieces of driftwood sticking out of the sand. But they weren’t driftwood.

They were a soldier’s two feet. He was completely covered by the shifting sands except for his feet. The toes of his GI shoes pointed toward the land he had come so far to see, and which he saw so briefly.

Ernie Pyle, a columnist and war correspondent, was killed in April 1945 at age 44 during the Battle of Okinawa. This column is reprinted with permission of the Scripps Howard Foundation.