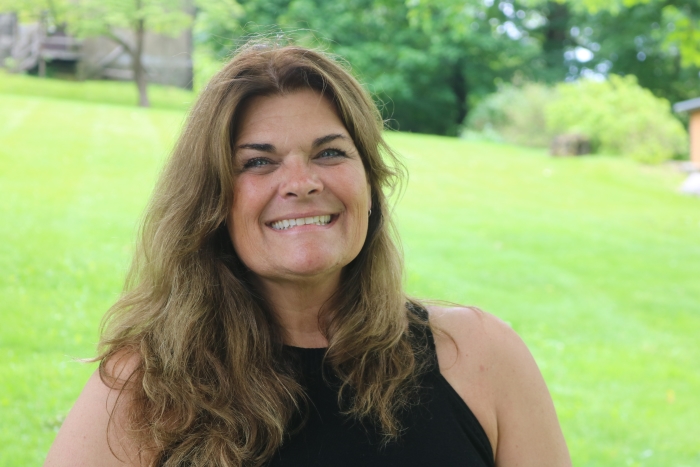 What led to the change?
I started having seizures. The doctors thought it might be Alzheimer’s; it scared the hell out of me. I started meditating, exercising, threw the cigarettes away, made a complete lifestyle change. I knew I had to work in a job that was stress-free. Going into massage therapy was part of getting healthy, getting my head in the right place. And it worked. I’m feeling way healthier now.

What was most challenging part of massage therapy school?
There was much more to it than I expected, a lot of science, a lot of kinesiology — the study of muscles and movement. I hadn’t cracked a book in a long time and my memory isn’t as good as it used to be. But once I started massaging people I knew that’s where I belonged.

Is giving a massage hard work?
If you don’t stand and move properly, you work much harder than you need to. It is physically taxing. Once, I did eight massages in a day. I was wiped out. You sleep well. You’re constantly moving for an hour or two at a time. Massage therapists need a massage too, but we don’t get them!

How has it been being a small-business owner?
Working as a bartender has helped a lot because I can deal with people. People need to feel comfortable to talk openly about what’s going on with their bodies. Owning my business makes massage easier. I’m not working for someone else, not doing eight massages in a day. Business-wise, it’s about getting my face out there. That takes time but it’s starting already. If people are happy, they bring other people. Other business owners keep telling me it’s about the internet, social media. I’ve pushed myself to do that.

Why do most people get massages?
It’s often upper neck pain caused by stress — people are on their phones or computers all day with terrible posture. Being able to let go of the week’s aggravations, to let them disappear for an hour, is huge. You don’t realize how much stress affects your body. Your shoulders are up to your ears, you’re walking around uncomfortably and don’t realize it. People also come with medical issues; muscles so tight they’re pinching nerves and causing pain. Also, I swear 75 percent of clients have a scar on their back; there are so many back surgeries. And sometimes there are emotional factors. People may have issues you don’t know about. Massage can be their emotional outlet. Whenever you can let go of stress, that’s a good thing.