There are nearly 200 lineage societies that cater to genealogists, including those for descendants of the Mayflower passengers, the signers of the Declaration, early state residents, veterans of various wars, even witches and pirates. With the approach of the country’s 250th birthday in 2026, I expect more people will start searching for patriot roots.

You can find a list of lineage societies at lineagesocietyofamerica.com. The requirements to join each are similar and involve proving your descent from an ancestor who qualifies. 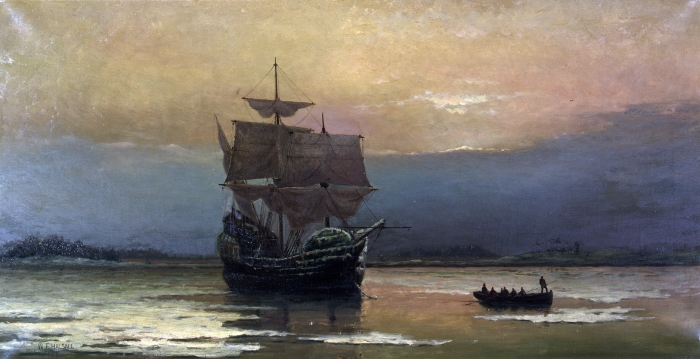 The Mayflower in Plymouth Harbor, by William Halsall

One of the oldest and best-known lineage societies is the Daughters of the American Revolution, which has chapters in Putnam and Dutchess counties. Its volunteers assist with applications and maintain a database of ancestors who have already been established as patriots. Visit the genealogy research section of dar.org to see who you might find in your own family. If someone else has joined using your patriot, you only need to prove your lineage from yourself back to a common ancestor.

Gathering the necessary documents for an application — starting with your own birth certificate, and those of your parents and grandparents — can be hard work, and sometimes people hire professional genealogists to assist. The further back you go, the scarcer the records will become, in most cases.

Military service is not the only qualifier to join. Did an ancestor lend aid by supplying food or clothing? In New York we had the Committee for Detecting and Defeating Conspiracies, active from 1776 to 1781. The minutes are published and can be quite handy, both for establishing Loyalist ancestry and for finding names of those who helped by transporting prisoners, testifying or reporting Loyalist activities, such as burying supplies for the enemy troops.

A sampling of heritage societies

Don’t limit your search to Putnam and Dutchess. Regardless of where your ancestor served, you can join any chapter — the Enoch Crosby chapter is based in Carmel (enochcrosbydar.weebly.com) and the Melzingah chapter in Beacon (melzingahnsdar.org). And don’t overlook female ancestors; although more difficult, there are ways of researching and documenting service by women.

A famous case of that near and dear to Putnam County residents is Sybil Ludington, who made the famous ride to wake the men when the English were burning Danbury. The story is difficult to document, and Sybil still does not have confirmed patriot status. In the 1930s, the Enoch Crosby Chapter spearheaded efforts to erect historical markers for Sybil and her father, Henry Ludington, who is a recognized DAR patriot. In 1961, they dedicated a bronze statue of Sybil on horseback, sculpted by DAR member Anna Hyatt Huntington.

The Melzingah Chapter of the Daughters of the American Revolution recently held two re-dedication ceremonies for the grave markings of Katherine Wolcott Verplanck at St. Luke’s Cemetery in Beacon and Sarah J. Entrott Horton at North Highland Cemetery in Cold Spring. 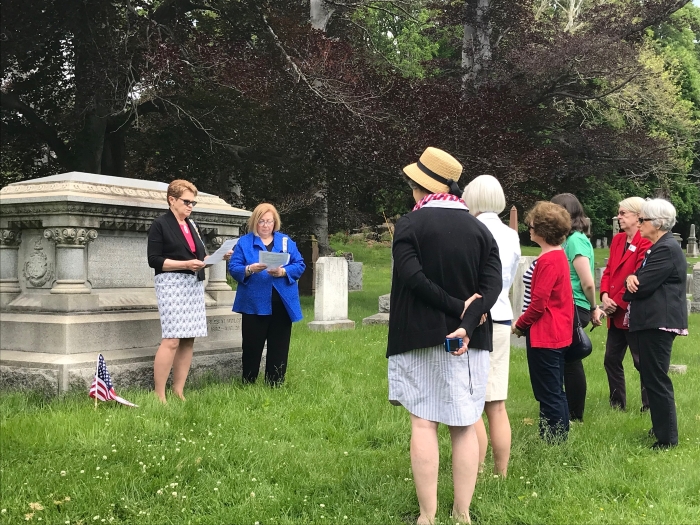 Verplanck was a founding member of the chapter in 1895 and its first regent, serving until 1898. She was the great-granddaughter of Oliver Wolcott, a signer of the Declaration of Independence. She and her husband, Samuel, lived at the estate Roseneathe in what is today Beacon. She died in 1941.

Horton, who died in 1904, became a member of the DAR through the Revolutionary War service of her father, Henry Entrott. Because she was a “living link” to the Revolution, she was known as a Real Daughter. The initial marking of the gravesites was done in 1998.

One of the chapter’s missions is historic preservation, such as locating, preserving and photographing patriot gravestones. In 2004 it placed a marker on the grave of Enoch Crosby in Carmel, replacing the original that had been destroyed by people removing pieces of the stone to take as souvenirs. (Crosby was an American soldier and spy who may have been the inspiration for Harvey Birch in James Fenimore Cooper’s novel, The Spy.)

The chapter’s members also march in parades, decorate wreaths and invite the public to participate in a Ribbons of Respect program honoring veterans. But the DAR is not all about history and genealogy — its members volunteer at a local soup kitchen and “adopt” a low-income family during the winter holidays. They take turns participating in naturalization ceremonies. They support education with scholarships, essay contests and the Cadet Medal for ROTC students. These are all ways members not only learn more about their ancestors, but honor them.