She was born on June 8, 1948, in Beacon, the daughter of Louis and Elizabeth (Chizmar) Belusar, and baptized at St. John the Evangelist Church in Beacon.

Margaret worked for more than 25 years on the assembly line at Medtronic in Beacon, until her retirement.

Her longtime companion, Margaret Mendez, died in 2010; she is survived by her friends Millie Melendez, Lydia Flores and Marilyn “Nani” Ricottilli.

A graveside service will be held at 10 a.m. on Monday, July 15, at St. Joachim Cemetery in Beacon. 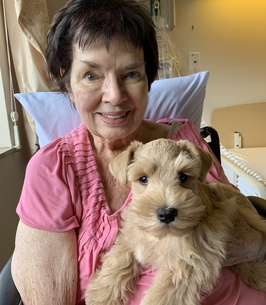 Audrey May Brill, 83, a lifelong Beacon resident, died of cancer at her daughter’s home on July 5, 2019.

Born in Poughkeepsie on March 24, 1936, she was the daughter of George and Ella (Shwella) Dennis.

Audrey was employed by IBM in East Fishkill for more than 30 years. She was a member of the Hudson Valley Tole and Decorative Painters and a longtime member of Christ United Methodist Church in Beacon.

Audrey loved all animals, especially her basset hound, Casey, and her daughter Dawn Brill’s schnauzer, Sky. In her younger years, she enjoyed riding her horse, Rosey. Audrey especially loved being with her granddaughter, Ella Brill. She always had time to attend her dance classes and events.

A memorial service will be held at a later date. Memorial donations can be made to the Rheumatoid Arthritis Foundation (arthritis.org).

Donald Justin Dell, 96, of New Windsor, who for 30 years was a transmission technologist for Texaco Laboratories in Beacon, died at his home on June 30, 2019.

He was born in Newburgh on June 7, 1923, the son of Robert and Florence (Woolsey) Dell.

Donald served as a sergeant in the U.S. Army during World War II, stationed in Luzon, New Guinea, with the 1875th Engineer Aviation Battalion. On April 30, 1949, Donald married Lucille Ruscitti. She died in 2008.

Donald was a life member of St. George’s Episcopal Church in Newburgh and a past president of The Patriotic Order Sons of America.

A memorial service was held on July 12 at Brooks Funeral Home in Newburgh, with interment at Calvary Cemetery in New Windsor. Memorial donations may be made to Hospice of Orange & Sullivan Counties, 800 Stony Brook Ct, Newburgh, NY 12550.

Christopher was born on July 27, 1940, in Beacon, the son of Christopher and Elita (Sassi) Kiernan. On June 11, 1967, he married Annelore Juergens. A veteran of the U.S. Army, he retired from IBM in East Fishkill as a chief financial planner.

In addition to his wife, Christopher is survived by his daughter, Lisa Wagner; his granddaughter, Hanna Wagner; and his brother, Bryce Kiernan (Joan). A private graveside service will be held at Cedar Hill Cemetery in Newburgh.

After graduating from Beacon High School, he joined the Air Force in 1966 and served in Vietnam. He was honorably discharged in 1976 as a sergeant. He was a parishioner of St. Joachim – St. John the Evangelist Church.

Edward is survived by his sister, Wanda Koslowska, of Wappingers Falls. A funeral service was held on July 9 at Riverview Funeral Home by Halvey in Beacon, followed by burial with military honors at St. Joachim Cemetery.

Born in Adel, Georgia, on March 20, 1929, she was the daughter of Mary Lizzie and Washington Clowers.

After spending her childhood in Georgia, she moved to Belle Glade, Florida, where she graduated from high school in 1945. Lee Anna married Nathaniel Powell in 1946 in Belle Glade, and the couple moved to Glenham, where they raised 13 children.

Lee Anna was a member of the Springfield Baptist Church, Faith Temple C.O.G.I.C. and Beacon Light C.O.G.I.C. Although much of her time was spent at home, Lee Anna made time to advocate for the community by helping people to register to vote and working on political campaigns.

She and her family relocated to Deerfield Beach in 1988, where she served on the Deerfield Beach Democratic Club, the Democratic National Committee and the Women’s Political Caucus. She also was a member of the Cathedral Church of God.

She also is survived by her sisters-in-law, Lily Ruth Carr and Lily Kate Richardson (Clarence), 28 grandchildren, 48 great-grandchildren and 11 great-great grandchildren.

Services were held on July 6 at the Cathedral Church of God in Deerfield Beach. A memorial will also be held on Aug. 10 at 10 a.m. at Springfield Baptist Church in Beacon.